Moscow may seem like an improbable place to find two lifelong friends who turned their infatuation with the golden age of hip-hop into a G-house–dominating duo, but VOLAC has risen against all odds. The Russian duo first emerged after being discovered by Amine Edge & DANCE, who released their first major single—“Snapback,” a dark, sub-slumping cut that’s heavy on sex appeal and gangsta flava—in 2014 on Cuff. VOLAC quickly became regulars on the label, releasing an avalanche of top-shelf, club-ready EPs and singles, as they established a sound that is so fresh and so clean. In yet another unlikely turn of events, they cemented a status as dancefloor-rocking ambassadors of booty in Brazil, where they have toured extensively over the last two years.

In a stroke of marketing genius and a nod to one of their other obsessions, cartoons, they have created animated versions of themselves to host VOLACAST. The podcast features some of the greatest underground house artists on the planet as they get into all kinds of comic shenanigans—like the time Dirtybird player Will Clarke was getting a haircut from a dinosaur, and a dance party ensued. Oh, there’s music, too. VOLAC’s recent release on Night Bass Records is the second on the label for the duo, and it shows them in top form, with all three dirty, jacked-up jams guaranteed to put that rear in motion.

For their Metronome mix, they’ve taken things to the dark side with a string of cuts that place you right in the middle of a sweaty underground party. In it, they expertly serve up a brew of rude boi basslines, 808 funk, and brilliant slices of classic house and, of course, hip-hop. 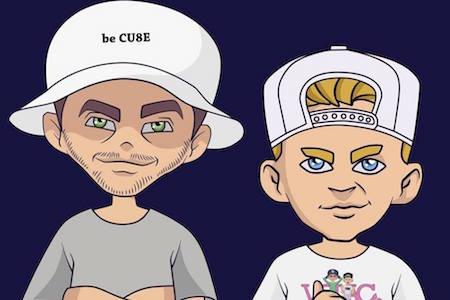 Were you big consumers of American hip-hop culture growing up? What’s the Russian hip-hop scene like?
We started listening to hip-hop from the golden age: B.I.G., Wu-Tang, etc. We definitely love their style. In Russia, there are just a few good rappers, but sometimes we find really good tracks to listen to.

When you first started producing 10 years ago, what were you making?
First, our tracks were like shit. They look like 15-second loops with an organ melody. In the beginning, we didn’t know anything about mixing and production, and the sound was really awful. But we think everyone starts from this point.

You guys have known each other for 20 years. Do you spend a lot of time with each other’s families? How have they reacted to your success?
Yeah, we were neighbors and grew up together in one hood. Today, we live very far from our families, and we visit them only 2–3 times a year. They are very happy about our success. They always support us and believe that the main things for our careers haven’t come yet.