On Sunday, March 26, Ben Prok & James Fitch—known together as Prok & Fitch—will join Solardo, Detlef, Green Velvet/Cajmere, and others at the Cajual vs. Relief party in Miami. It’s a long way from their notorious underground Floorplay parties in Brighton, England. Then again, Prok & Fitch move quickly.

The duo bonded over their musical taste in a record shop in 2006 and broke through with support for their debut “Outro Lugar” from Roger Sanchez, who signed it to his Stealth label in 2008. Since then, they’ve become regulars on the Beatport Top 10 charts; fixtures on Ibiza and worldwide festival marquees; and recurring guests on prestigious labels like Toolroom, Suara, Axtone, and Relief. Additionally, Prok & Fitch head up their own imprint, Floorplay Records.

In the midst of this flurry of activity, the duo found time to put together the latest Metronome mix. It includes prime and twisted party cuts by Mendo & Yvan Genkins, Will Clake & BOT, Steve Lawler, Detlef, and Green Velvet/Cajmere—plus “Minder” featuring Dajae, and “Wailer,” the title track from Prok & Fitch’s latest Relief release.

We caught up with the restless duo a few days before their Miami Music Week gig to see how they put this banging set together and what they’re up to next. 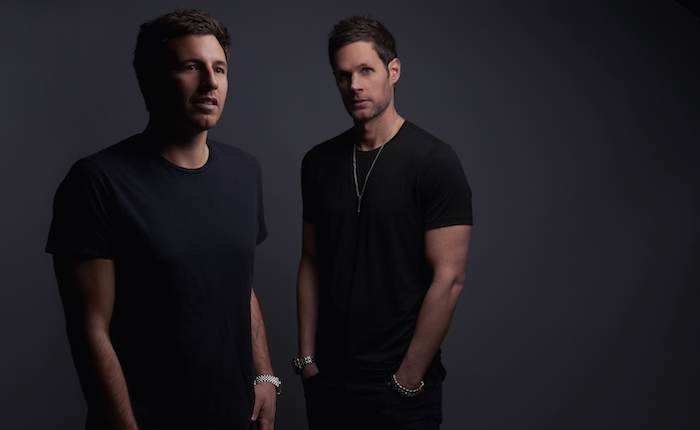 Where and how was this recorded?
We recorded this mix in our studio in Brighton using Ableton. It tends to vary, really, how we record our mixes. We’ve been using Evermix at our gigs quite a lot recently, as it allows you to record straight onto your phone and then upload to their website directly from there. But as this mix was exclusive, we wanted to make sure the right music was on there, so we spent a lot of time working on it.

What inspired the general feel for this mix?
We wanted this mix to reflect what we’re playing live in the clubs. It’s always a difficult task trying to squeeze a DJ set into an hour mix, whilst keeping the flow. But we wanted a balance of our own stuff without being too self-indulgent—some exclusives and a few weapons, too!

What was the selection process? How was the sequence decided?
It’s quite a lengthy process! Generally, we go through tracks that are working for us right now in our sets, and records we wanted to get on the mix. So initially, we have a folder of 50+ tunes that we go through, add to, etc. We’ve been working together for such a long time that, musically, we’re on the same page and know what kind of vibe and direction we want to take the mix. From DJing out a lot, there are tracks you know work well together, so naturally, we’d put them together on the mix. For the rest of the tunes, it’s just a matter of trial and error.

“Hey Boy” by Mendo & Yvan Genkins is a great opener. How did you settle on this track to start the mix?
We wanted something that was an immediate vibe-setter. This is perfect, because it’s got balls, but it’s also just a head-nodder with a nice groove. So, it sets the tone nicely for what’s about to follow.

What’s your favorite thing about working with Dajae, one of the greatest house vocalists, on “Minder”?
She just gets it. She feels the vibe of what she’s working on and just sprinkles it with magic. We’ve wanted a vocal off her since forever, so it was a real pleasure to work with her.

“Sheeple,” your collaboration with Green Velvet, is becoming more prophetic by the day. What was your intent recording it, and what’s it like seeing it take on extra meaning in 2017?
We originally made the record and sent it to Green Velvet to see if he was feeling it to work on with us. He loved it and said he had a great idea, so he went away and came back almost immediately with what you hear on the record. We can’t really take any credit for those lyrics; he’s just a genius when it comes to those things. He thinks so far outside the box—that’s why everything he touches turns to gold! It’s just been good timing with how it’s coincided with events in the US. As for the “We are in control” hook, that’s just the icing on the cake!

You’ve become staples on Relief. What has been the best thing about working with Green Velvet?
He’s such a genuine, nice guy; it’s no wonder he’s as successful as he is. He’s incredibly enthusiastic about our music, and that’s given us a lot confidence in what we’re making at the moment, because it’s all from the heart.

The Cajual vs. Relief party in Miami during Music Week sounds amazing. How do you prepare for a night like that? What are you looking forward to most about that event?
Yeah, the lineup is pretty special. It’s one of those gigs you look forward to for a long, long time; you know it’s going to be great. We really look forward to partying with other artists. Besides BPM & ADE, it’s the only time you get to see everyone. The drinks will be in full flow!

We’ve been putting in some serious studio hours to date, specifically finishing new tracks for Miami. With music being so disposable nowadays, the only way you can really stand out is making and playing music no one else has. We’ve got five new unreleased records that we can’t wait to test out.

Detlef’s “My Home” is a hot track. What appealed to you about it for this mix?
It certainly is. We play at least one Detlef record in every set we play; he’s an amazingly talented producer. “My Home” was perfect for the mix, as it’s just got that drive and pretty much works with anything we play. It just rolls nicely without too much else, so it’s great for teeing up a big moment in the mix—in this case, providing the foundation for “Sheeple” to really work in full effect.

What’s up next for Prok & Fitch?
We’ve just remixed the classic “La La Land” for Green Velvet, which is going to be our next release in April. Then, we have two new EPs finished, one of which will be out with Kaluki before the summer. We’re working on a collab with Solardo and have another thing on the go with Green velvet, too—so, lots of new music. We can’t wait to get it out.