René and Gaston have been on the prowl for 25 years and counting, having spent that time gnawing away at the ears of the dance music kingdom with one of the most prolific outputs out there. In the past, they’ve been known to shed their skin, switching between aliases to cover the full spectrum of house, techno and beyond. It’s their Chocolate Puma project that really stuck, allowing the Dutch duo to stake their claim at the top of the producer food chain.

In recent times, the two cats have been leading the pack on the future house front, transcending generational gaps in ways the majority of old-school heads wouldn’t be able to manage. They’ve been rolling out roaring numbers on respected imprints from the likes of Spinnin’, Heldeep and Musical Freedom, with their latest collab alongside Sander van Doorn—“Raise Your Hands Up”—serving as another lesson on how to keep things extra fresh.

With the tune currently making the rounds, it seemed like the right time to rope in the seasoned vets for a safari through their sound. In it, the two-headed beast tears through a grip of groove-driven gems like it’s nothing. 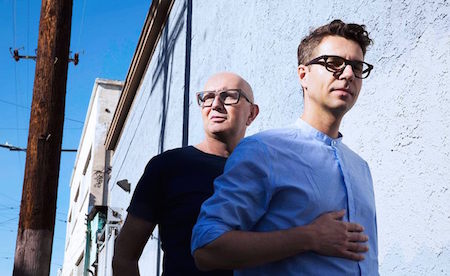 You’ve been smashing it on the future house tip lately. What is it about the burgeoning genre that has seemingly given you access to this giant pool of fresh creativity?
A lot of this “future house” obviously has its roots in the kind of house we’ve always been making: energetic house with good melodies, but still with some balls. The cool thing is that there is this whole new breed of young producers that have their take on house music, coming up with fresh ideas, which is very inspiring to us. House music seems to keep evolving over all these years.

From the recent bits you’ve put out in that category, which has been the most fun to make, and why?
We had great fun making “Scrub the Ground” with Tommie Sunshine & DJ Funk. It’s always good to be in the studio with Tommie, because what we mostly do is talk so much about music, life or random stuff, so the vibe we have with him is the best. Making music with him comes naturally.

Why do you think the festival circuit has been so receptive to future house?
We think because the people were getting a little tired of all the banging, formulaic, big-room drops but were still looking for music that has enough energy. We think this whole new wave of house music just ticked the right boxes for lots of people.

Where can house possibly go if it’s already in the future?
We like any music that is kinda already in the future, so we are always kind of looking for new and exciting music. And house always has been evolving; there is always this new kid coming up with amazing new sounds, or there is a movement in a city somewhere on this globe causing some waves with cool new vibes.

In the past, you’ve kept a plethora of various monikers in your back pocket to flit between sounds and styles without letting the other project lose its identity. But with genre-hopping now being the norm, do you feel there’s a need for an artist to have as many projects these days?
No, we think that’s absolutely not necessary anymore. We can, and we do, explore every genre we like under our Chocolate Puma moniker. You could say we’ve grown up, haha.

With over two decades in the game, what wisdom can you impart for the newcomers who are looking to achieve longevity?
Just do it because you love music. Don’t do it because you’re after fame or money. Don’t let “genres” limit you. Be kind and professional, but don’t forget to have fun.

On the other end, has the latest generation of producers taught or inspired anything new for you?
Yes, for sure. The new generation has grown up making music inside a computer, so their mindset can be different than that of us old-school producers, and that can be very inspiring to us. At the same time, we sometimes get to blow some young minds with our experience and way of making music, haha.

You’ve probably seen it all already. How do you keep things from getting stale, both on the road and in the studio?
Very simple: We love making and playing music. That never gets old.

The partnership you share has lasted longer than most marriages today. What’s the secret behind not constantly being at each other’s throats?
We both can be a bit odd, weird or difficult sometimes, which is a big part of being creative, but we respect each other and each other’s flaws. We also complement each other; you could say we’re a classic case of yin & yang.

Please share a few words on the mix you’ve put together.
Every mix or DJ set is different, because we never pre-program our set or play the same set twice. It always depends on the crowd in front of us [as to] what we play. The crowd tells us what direction we should take. When we recorded the Metronome mix here in our studio, though, we did a live approach and imagined an open-minded, intimate crowd somewhere in this cool club in front of us.