After deatmau5’s new album, While (1<2), landed in my inbox Tuesday morning, I felt that there would be no better way to experience Joel Zimmerman’s most recent creation than to the backdrop of a World Cup bout between two of the most brilliant soccer nations. After all, pairing While (1<2) with the powerhouse match of Mexico vs. Brazil seemed like a no-brainer to me, as they both promised to be an exciting escape from an average Tuesday. Unfortunately, like the match that transpired, While (1<2) meandered around, showing moments of brilliance buried deep inside a 25-track double album. 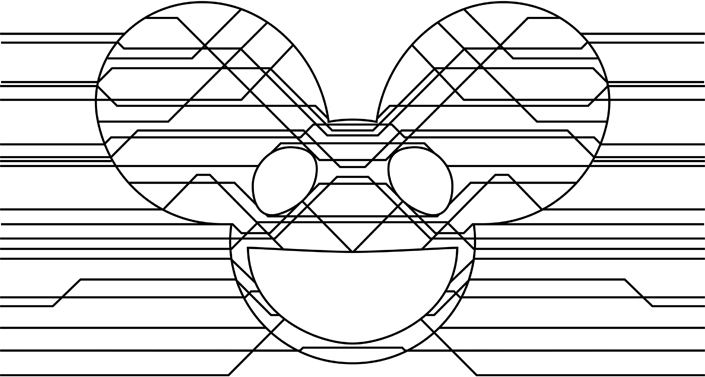 As with the match, most of the best parts of the album were hyped up before even being released to the public. “Phantoms Can’t Hang”—the standout track on the album—has been available for purchase and streaming for over a week now. And the same can be said about destined-to-be classics “Avaritia” and “Infra Turbo Pigcart,” which both saw the light of day weeks ago. The game, which no doubt saw moments of brilliance—such as Mexico goalkeeper Guillermo Ochoa’s inspiring save in the first half—ended in a 0-0 after 90 minutes of inspiring yet mundane play. The same, however, could not be said about While (1<2); as the finale whistle blew in the match, I still had more than 50 minutes of material to listen through.

If anything can be taken away from this review, it is not as if anything Zimmerman produced on the album was ostentatiously bad; it was just boring—very boring. It was a chore to finish, which in the past was never the case with deadmau5’s albums. Say what you want about the trolling nature Zimmerman displays on a daily basis; it is his tracks that always made his attitude bearable. Part Amon Tobin B-sides, part halfhearted attempt at channeling Aphex Twin. While (1<2) is ultimately a failure of a concept album with sprinkles of deadmau5 greatness plopped in for good measure.

At 25 tracks and over 141 minutes, the album is way too long. Just like Tuesday morning’s World Cup match, While (1<2) had all the promise of being an epic album but ended up being a giant waste of time. At least the match lasted only 90 minutes.