Two of the most notorious men in Canadian history—deadmau5 and noted party person Toronto Mayor Rob Ford—recently paired up for an installment of deadmau5’ Coffee Run video series. The clip, which posted yesterday and has gotten more than 180,000 views in the past 24 hours, features the pair driving around Toronto, getting coffee, and talking primarily about construction zones and fishing. There are also a few lessons to be learned about life as one of the most controversial figures in electronic music and one of the most controversial figures in local Canadian politics.

Here are five facts we picked up:

1. Famous DJs Get to Do Things Normal People Do Not Get to Do

The conversation starts out with Ford complimenting deadmau5’s sports car, the Purrari. deadmau5 says he once had the car flown to Scotland so he could race it on an airport runway that had been shut down especially for him, which is the kind of scenario not typically experienced by non-rich-and-famous people. The car, he announces, goes 210 miles per hour. Ford is impressed, noting that he himself has to avoid speeding because, “If the cops catch me again, I’m toast.”

Like many people who used to use drugs but now (presumably) use less drugs, Ford seems to be a bit of a caffeine addict, ordering no fewer than five espresso shots when the duo reaches the coffee shop. “I pound these espressos back,” Ford says, “and I’m on the phone, so I just keep calling people and calling people. I call people sometimes at one in the morning!” deadmau5 remarks that Ford’s beverage of choice sounds like a “cardiac arrest” in a cup. But hey, at least it’s not crack!

Ford pays for the coffee and lets deadmau5 keep the change to cover gas. deadmau5 seems impressed. We’re curious about how much deadmau5 got paid to wear the In-N-Out cap he’s got on in this video. 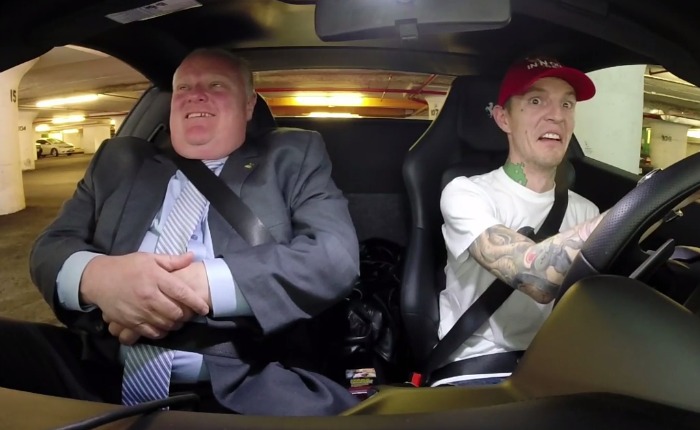 4. deadmau5 and Rob Ford are Both Famous Celebrities, Goddammit

“I don’t know how much you get mobbed when you go outside,” Ford remarks of his own fame. “Last night I went out to a restaurant on Young Street, and I was pinned up against the wall.” Zimmerman replies that his tactic for avoiding such scenarios is just wearing a hat and looking at the ground when he’s out in public.

“You’ve gotta come out with me one time,” Ford says. “Fifty percent of people love me, and fifty percent hate me.” Deadmau5 can presumably relate.

5. But deadmau5 and Rob Ford are Also Both Just Normal Dudes

Ford announces that people are currently making movies and writing books about his life, to which Zimmerman remarks, “My life, I think, outside of the music stuff—and I think it’s probably the same for you and your politics stuff—is so benignly stupid. It’s not even worth writing a book about.”

“I don’t know what they think we do,” ponders Ford, remarking that he spends his free time playing board games.

To be fair, Rob Ford, this is what most people think you do with your free time.