While the influence of reggae and Jamaican sound system culture on contemporary dance music culture has been well documented, the year 2014 was a year in which those influences seemed to break free from their usual genre categories to take center stage across the entire spectrum of dance music. Was it a revival or recognition of where it all began? Was it an homage to the past, or was it part of a larger transition in dance music culture that continues to mash up disparate elements in search of something new? We’ll let you decide; until then, here are some moments to help guide you along the way.

Before we begin, what do we mean by “sound system culture”? If we take a look back to the early days of heads rigging up sound systems in Jamaica and playing out fresh, unreleased music on monstrous rigs, it isn’t hard to see the ways in which that culture is the direct forebear to forms as varied as jungle, drum & bass, trap, grime, footwork, dubstep, and even mainstream hip-hop.

Saying that dance music culture can trace itself back to names like Duke Reid, Sir Coxsone, or King Tubby is likely to get a lot of raised eyebrows from some. But when it is explained how neighborhood streets and parking lots were transformed into full-on asphalt dancefloors—with selectors playing special versions of popular songs while MCs provided running commentary, “chatting” over the beats—the vision becomes clear, even without understanding the sonic lineage that ties dancehall, reggaeton, baile funk, kuduro, soca, etc. to contemporary music on both the mainstream and underground airwaves.

When we flock to festivals and clubs to link up with our own contemporary tribes of fellow music-lovers, we are re-enacting old rituals where DJs, MCs and sound systems came together to create a communal space that continues to transcend national and international boundaries in search of the almighty beat.

The most obvious place to begin is with Diplo’s highly controversial Major Lazer project (is it cultural appropriation or simply World Music 2.0?). Whatever side of the fence you sit on, there’s no denying the power that Diplo wields when in “Rasta superhero” mode. Working with everyone from Madonna to Ty Dolla $ign, the collaborative Major Lazer project with Jillionaire and Walshy Fire (from Trinidad and Jamaica, respectively) fuses reggae and dancehall sensibilities with a number of disparate subgenres like trap, moombahton, electro, house, and more.

To get a sense of the genre/cultural mashup that Major Lazer brings, check the video for “Sound Bang” with Machel Montano, released ahead of the annual Major Lazer & Friends concert in Jamaica, featuring Skrillex, DJ Snake and Rudimental.

If that wasn’t enough to convince you, prepare for the long-rumored cartoon version of Major Lazer, due to surface soon on Fox alongside a soundtrack that will feature collaborations with Cat Power and RiFF RAFF.

General Levy, a legendary jungle MC who rose to prominence in the mid-1990s—most notably with his hit single “Incredible”—has had a proper resurgence of his own this year. Having evolved into something of an elder statesman, Levy is not only called upon to bridge classic sound system culture with the “future” sounds of jungle and drum & bass, but he has slowly but surely been surfacing in projects like Sticky’s UK-garage-meets-trap-influenced “Pull Up.”

Alongside the release of his Forward LP in collaboration with Italian producer Bonnot late last month, it was his guest appearance on the now-infamous grime takeover of Mistajam’s #SixtyMinutesLive show on BBC Radio 1Xtra where history was truly made. Three generations of heavy-hitters were in one room, representing the evolution of reggae to jungle to garage and grime.

After earning his stripes with a series of dubwise hits on Shy Fx’s Digital Soundboy imprint, the London-based drum & bass producer known as Benny Page has gone on to blur the genre lines on his own High Culture imprint in the past year. Having spent two weeks in Jamaica—not only revisiting his roots, but also putting in serious studio time with over 20 local vocalists (Big Youth, Beenie Man, Spice Popcaan, and Protoje among others)—the fruits of that journey have blossomed this past year in the form of the moombahton-influenced “Hot Body Gal” and “Champion Sound.”

Where “Hot Body Gal” takes the vocals of relative newcomer Richie Loop, “Champion Sound” pulls on legendary dancehall artist Assassin to melt drum & bass, dancehall, reggae, and breakbeat into a 140-bpm stew that is hard to place genre-wise but absolutely pops on the dancefloor.

From his Cosmology compilation LP project to his mind-bending Inversion LP for Metalheadz, no other figure has pushed the boundaries of what sound system culture has become in the past year. Starting off in production as a turntablist/hip-hop artist known as 2tall, the London-based artist went on merge footwork and classic jungle under the alias Philip D. Kick. Along with heads like Machinedrum and Mike Paradinas of Planet Mu, their unique take on the foundation built by Chicago-based artists like DJ Rashad, DJ Spinn, DJ Earl, Traxman, and RP Boo paved the way for the birth of the “slow/fast” sound of his Om Unit alias.

Residing in that space where hip-hop, footwork and jungle intersect, Om Unit’s half-time kicks, dubby basslines and stuttering breaks hit a sweet spot—most notably on his releases for Metalheadz, 31 Records, Shoot, and his own Cosmic Bridge imprint in the past year.

To understand the power of Om Unit’s vision and the way he connects Jamaica to London to Chicago and Detroit, check the mix he just turned in for Friction on BBC Radio 1: 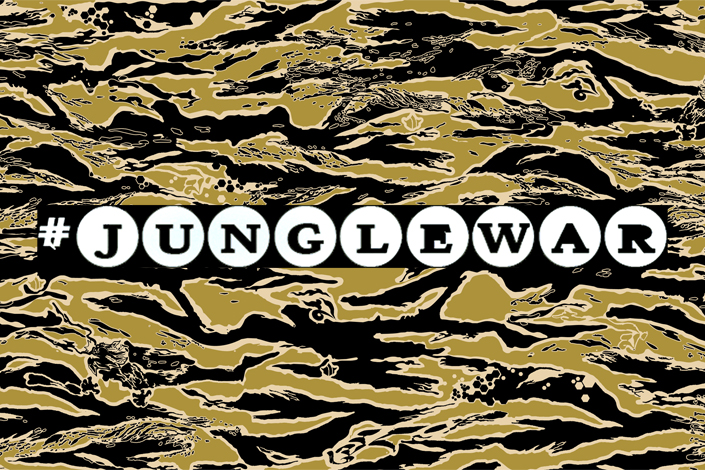 Echoing the grime war of 2013, the bass community went to war in 2014—#junglewar, that is. Drawing upon the classic sound system tradition of a sound clash, producers from across the BPM spectrum of the international bass music scene began challenging and responding to each other on Twitter and SoundCloud with tunes that sought to outdo each other in sheer technical power and creative prowess—all built on a classic ragga jungle template.

While most of the “war dubs” have been removed for mysterious reasons (copyright issues?), the #junglewar was a moment that echoed the past and eerily pointed to a virtual future where the likes of Epoch, Gantz, ETCH, Om Unit, Sully, Sleeper, Coleco, Fanu, Tim Reaper, Chimpo, Serial Killaz, R.A.W. and up-and-coming bedroom producers of all stripes could be involved in a kind of hyperreal sound clash with no physical referent in the world. 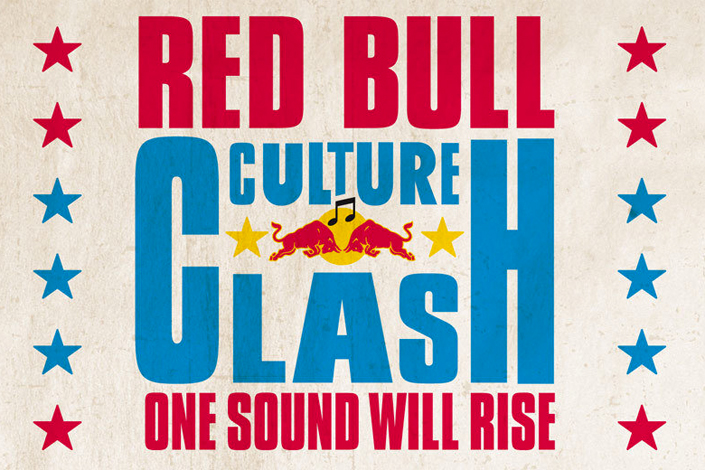 While the #junglewar was being fought in virtual space, a real-world sound clash was about to go down in the heart of London in the form of the Red Bull Culture Clash. In the days of the famous sound systems of Jamaica, systems like Sir Coxsone’s Downbeat, King Edward’s Giant, and Duke Reid’s Trojan stood tall above the rest. In a traditional sound clash, two crews would set up their sound systems in close proximity to each other and then play back-to-back, or even at the same time, to see who had the loudest sound system and the best tunes, as determined by the response from the crowd. 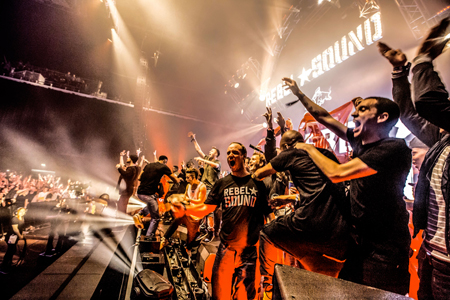 Enter 2014, where the best of grime, hip-hop, reggae, and drum & bass—in the form of contemporary crews like Rebel Sound, A$AP Mob, Stone Love and Boy Better Know—came together at Earl’s Court in London to square off on four custom systems over four rounds in front of a crowd of over 20,000 heads. Consisting of drum & bass luminaries Chase & Status, Rage, and Shy FX, alongside 63-year-old DJ and sound system veteran David Rodigan, the Rebel Sound crew crushed the competition with a variety of heavy-hitting specials, including a number of re-recorded “diss” vocals on classic tunes like “Original Nuttah,” “Incredible” and “Limb By Limb” just for the event (the most impressive feat in this vein was Rihanna recording fresh vocals for “We Found Love”).

As there was no live feed of the competition available in the US, El Hornet from Pendulum linked a live video feed from his webcam to the television and allowed US heads like DJ Craze in on the real-time action. Meanwhile, Twitter blew up with a blow-by-blow account of who played what and how it was all going down, bringing that sense once again of a virtual community transcended by time and space in celebration of roots and culture.

Looking ahead to 2015, it’s easy to see the continued influence of footwork, juke, and other half-time, break-driven beats, as even the Japanese have latched on to the clash elements of the footwork dancefloor. While one could argue that sound system culture and elements of Jamaican culture and music are ever-present in the dance music world year in and year out, we would agree but point to the ways in which that influence is more like a ghostly presence rather than a full-on embrace of the culture, as we have seen in 2014 both visually and sonically.

As we move into the New Year, forms like drum & bass and jungle will no doubt continue to explicitly reference sound system culture in their ongoing iterations. But what will be most interesting to see are the ways in which the evolution of footwork, juke, trap, and bass music in general will continue to draw upon the past while mashing it up to create something entirely new.

How to Talk to Your Parents About Diplo