From shared memories of the old school on through to a glimpse into the ongoing evolution of dance music culture, join us as we embark on a special edition of our Head to Head series, where we pair two voices together to paint a picture of just how far our culture has come over the past 20 years, and how much further it has to go.

What kind of music did you listen to when you were growing up? Were there any musical people in your family?
12th Planet: No one is musical in my family; in fact, my family is the complete opposite of music. I was fortunate enough that my parents had cable TV, so I had MTV and was able to watch Mötley Crüe and shit. I identify myself with that generation; MTV is what influenced me the most.

Champagne Drip: We actually didn’t have MTV in Bend, Oregon, until I was into my teens. But my mom was in a band when she was in high school and played piano and guitar to me when I was young. I remember we had a record player that I wasn’t allowed to touch until I was a certain age, but I could pick out records from my parents’ record collection, and then my dad would put them on for me. He taught me how to record cassette tapes off that, so that became my musical education. I would put on a Billy Joel record and then record my favorite songs off of it, so I could take it to school and listen to them on my Walkman.

When does electronic music enter the picture?
12: It was somewhere in my sophomore/junior year of high school. I grew up in L.A., so dance music was very much a part of just growing up here. Whether it was DJs like Humpty Vission playing it on Power 106 or the guys throwing raves like Pasquale and Insomniac, I come from that culture.

CD: One of my sister’s friends was listening to Aphex Twin, Chemical Brothers, Underworld, and all that ‘90s electronica. I was about 16 at the time and got really into that stuff. Then this guy moved to my school from Washington, D.C.; he was a raver. I went to my first rave with him, and I hated it. But then like a year later, I was DJing. 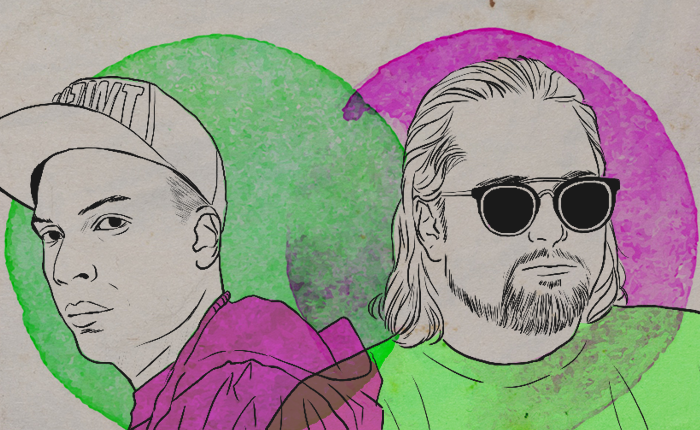 We initially met in the drum & bass scene. At what point does that sound catch your ear?
12: Drum & bass enters the picture for me somewhere around ’98, ‘97. R.A.W., Machete, Heretic, Deacon, all those guys were playing jungle back then, and I didn’t even understand what it was until I came across the Metalheadz Platinum Breakz album. That opened my eyes; but what really broke it wide open was the Renegade Hardware years, you know? The Armageddon album is everything to me—that’s like the handbook of how to make drum & bass.

CD: I wasn’t down here [in Los Angeles], so I wasn’t exposed to R.A.W. or Machete or anyone like that. But my sister’s friend—the same one who got me into Orbital and all that—he recommended some compilations, and I found some Photek tunes on there. Then, when I was out buying Photek, this dude at the record store was like, “Check out Boymerang and Goldie.” So, I checked that shit out too, and it kept going from there.

What was it about drum & bass that captured your interest?
CD: It was just more badass. The first time I heard Goldie, Photek and Boymerang, I don’t think I even really got it. What really got me into drum & bass was that I was into industrial music like Nine Inch Nails, and so when I heard the 6ixth Session mix CD by Dieselboy it was like the music I had always been looking for my whole life. It was machine music that sounded like machine music and had this dark, apocalyptic vision to it. This was when artists like Kemal and Rob Data, Stakka and Skynet, Tech Itch, and Cause 4 Concern were all at their peak. That CD paved the way for me for a long fucking time.

12: For me, it’s the complete opposite. I wasn’t drawn to drum & bass because of the music; I was drawn to it because of the cultural aspect of it. Growing up in L.A., house music was fucking huge, and drum & bass was the outcast—that third room at the rave at the Masterdome.

CD: It’s where the weirdos would hang out.

12: At that time, I was in high school, and people at my school weren’t really into that kind of music. So every weekend, I was going to San Bernardino to link up with the homies from Culver City, Pasadena and Riverside, and we would all just be breakdancing in the middle of the club. [We] didn’t even know the names of the songs, but we all banded together because we were all the crew that hung out in that third room. At the time, it became this thing of us against the world—as a high school kid or someone who hasn’t made their mark in the world, you want to be a part of that, part of a larger culture or movement, the same way people were into punk rock and heavy metal. Only for me, the scene I was most interested in was D&B—because it was cutting-edge, and because it was some weird-ass English music that no one fucked with.

Was there any tension or anxiety when you moved on from your drum & bass monikers and changed names?
12: I was producing drum & bass as Infiltrata, and at that time, people producing dubstep were hated on by drum & bass dudes; so, I created 12th Planet just to not get hated on. But what happened was that I started getting booked more for my alias than I was for my drum &bass moniker, and that’s what made it stick. If that had never happened, I’d still be infiltrating hard.

CD: I switched to dubstep but kept SPL, and that complicated shit a lot. I started getting way more dubstep bookings, I loved what was happening with the music, and it was way more exciting to me at the time. I got really sick of the hate that came my way at one point, but now, in retrospect, it’s whatever. Champagne Drip happened more recently, because the music that I’m doing now is so completely different.

12: Yo, what is Champagne Drip?
CD: The name is what I came up with after trying to come up with a name for like six months. Musically, the last EP I did on Smog as SPL was super melodic and tropical, and Champagne Drip is taking that and fusing together a bunch of genres like trap, jungle, reggae, Cuban music, and footwork into something new.

CD: Because I was really hungover [in] a studio I was working in, and I was lying on the floor and was like, “Oh god, I got to get to work, but I feel like hell; put me on a champagne drip.”

CD: Yeah, like a medical drip—it was the first thing that I came up with that I thought was cool and knew that I was going to still think was cool in a week. Before that, I had come up with a bunch of names that I knew I wouldn’t stick with, and I hate SPL because if you google it, all you get is Scottish Premiere League football. It sucks.

DJing continues to play a central role for electronic music producers. Could you personally produce and not perform?
12: In my opinion, no. There are two types of producers: There are guys that are introverts, who are happy to make music and just release it into the world, and then there are the extroverts that want to be in front of a crowd. My feeling is, if you just spent 100 hours working on a song, you want to be the first one to play it out, so you can hear everyone yelling and screaming without even knowing what song it is. That’s what it’s all about.

CD: I feel like it would be hard to be a producer without that direct feedback, positive or negative. There’s no hype when you drop a tune for the first time—you’re dealing with the real, is this the shit or not? When I nail it, it’s like hitting a ball out of the park. I remember playing my own tunes early on and just kind of being disappointed. But I also remember crossing that threshold when I first started writing dubstep and making good shit. That’s when I really started getting a reaction and having those moments where the hair stands up on your arms and you’re like, “Oh fuck, I just did something dope.”

What about all the 15-year-old kids out there who want to follow in your footsteps—what kind of advice can you give them?
12: I would tell him or her, YouTube is your best friend; there’s a tutorial for everything you want to learn about producing on there. At the same time, I would go to school, too, because dance music ain’t for everyone. You can’t just make a fucking tune and become a millionaire overnight; it takes a certain type of individual who is willing to put in a lot of work and time.

CD: You have to love it. You have to ask yourself how you want to spend all of your free time and your life. Don’t worry about money, and just trust your gut.

Any last shout-outs before we go?
12: I’d like to give a shout-out to my mom for birthing me.

12: Shout-out to Danny Johnson. He’s my roommate, my manager, my neighbor, my confidante. I’ve been doing this for a long time with that guy, and the times are getting funner—if “funner” is even a real word. [Editor’s note: it’s not.]

CD: Damn, that was so deep. I have a manager named Johnson, too, but Colin Johnson. I am so thankful for all the stuff he does for me. Half of it I don’t even know how to do; the other half I don’t want to do. Shout-outs to Infiltrata and 12th Planet. You were there from the beginning.