Last week, Hook N Sling hopped aboard Insomniac Records via his latest single, “Break Yourself.” For the release, the Sydney-based signee linked up with trio Far East Movement to unload his first foray into the grinding genre of G-house. Now, the ear-catching collab sees him making his debut appearance in a fun, albeit freaky, music video.

Directed by Carlos Lopez Estrada and Nelson de Castro, the visual follows a hot-boxed bus and the unusual fares it hauls around town. With Hook behind the wheel, the various groups of passengers get weirder by the minute. From cheerleaders keeping rhythm to the track’s infectious beat to a preacher rapping along with the FEM’s flows, watch as this bus gets straight turnt… literally.

Scope the premiere of the video below, and then catch a few words from Carlos to get some insight from the set. 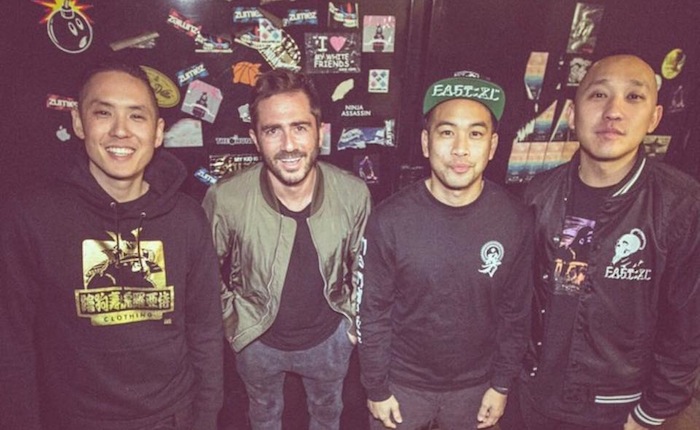 What was the biggest challenge you faced with using a bus as the backdrop for the majority of the video?
It got really hot in there, and all the actors were sweating a lot. It also smelled really bad inside the bus. It was a really fun day, though, as long as you were one of the people who didn’t have to be inside the bus. Poor actors.

With two directors calling the shots here, what were each of your roles throughout?
Nelson is the ying, and I am the yang. He is the sun, and I’m the stars. He is Han Solo, and I am his Chewbacca. We work well together.

As Hook’s first appearance in a music video, how would you rate his performance on and off the camera?
I would give him an A+ all around. He is a great guy. I felt bad, because he didn’t get to do much all day other than sit on the driver’s seat and stare at a black wall. It looked like he was having fun, though.

Describe your creative process to us, from brainstorming to storyboarding to cutting the end product.
We improvised the whole thing!!!

Are there any funny or outrageous outtakes you can share with us?
We lost the keys to the bus and couldn’t get it out of the set. We tried to push it, but it was too heavy. We called AAA, but they don’t tow buses. I actually had to leave and have no idea how they got it out of there.