Roni Size is speeding down the motorway, speaking almost as fast as he is driving. The longstanding drum & bass producer, who broke all kinds of barriers for electronic music with a genre that was the stepchild of the scene to begin with, has a lot to say about bringing his new music to the masses.

Size’s last full-length release was Return to V, 10 years ago. He is making up for lost time this August by releasing a six-track EP, boldly labeled Size Matters, to be followed by a descriptively titled full-length, Take Kontrol, which includes those six tracks and 10 others in its standard form, and 19 others plus an exclusive DJ mix in its deluxe digital form. Additionally, Size’s standard-setting live project, Reprazent, will be releasing two singles ahead of an album in 2015.

Musicians by default migrate to Los Angeles if they are US-based and to London if they are UK-based. But until eight months ago, Size remained in his birthplace of Bristol—which in the late ’90s felt like a mystical land where innovative and unique sounds were created by a secret society of drum & bass alchemists that was impossible to infiltrate. The society’s status was upped further in 1997, when Roni Size/Reprazent took home the UK’s prestigious Mercury Music Prize, beating out The Prodigy, the Chemical Brothers, The Spice Girls, and Radiohead, and thus forever altering the possibilities for everyone associated with electronic music on a global scale.

The collective’s homegrown labels, Full Cycle and Dope Dragon, along with drum & bass pioneers Bryan Gee’s and Jumping Jack Frost’s V Recordings—established to put out Size and his cohorts’ music—became leaders in the genre with aspirational, hard-to-recreate sounds. The larger the group’s presence, the further they moved away from the public’s eye, with Size as their most elusive member.

That was then. Now, if you follow Size on Twitter, it’s obvious he’s the one doing the tweeting and the retweeting. If you like him on Facebook, the replies to your comments are typed out by him. And his formidable website is updated, if not always by him, then under his direction. Size may have released a solo album called Touching Down in 2002, but it’s clear that not only is he really touching down these days; he’s also reaching out.

In a similar high-speed drive out of Coachella last year, Size played sound bites of track after blistering track of music he was working on from his iPhone at full volume. Teeming with the kind of energy that hadn’t been felt since the original Reprazent live shows, some of those numbers have made their way onto Take Kontrol, and some of them will be heard on the new Reprazent album. Cackling at the elation these snippets were inducing, Size knew he had the material with which to herald his return. “Great” is his current catchword, used in relation to everything: music, people, life, the world.

I’m ready to be part of the party again, [but] I’ve got a lot of work to do. As soon as you take a step back, there’s someone ready to come and enjoy your spot. I’m ready to work for that spot again. 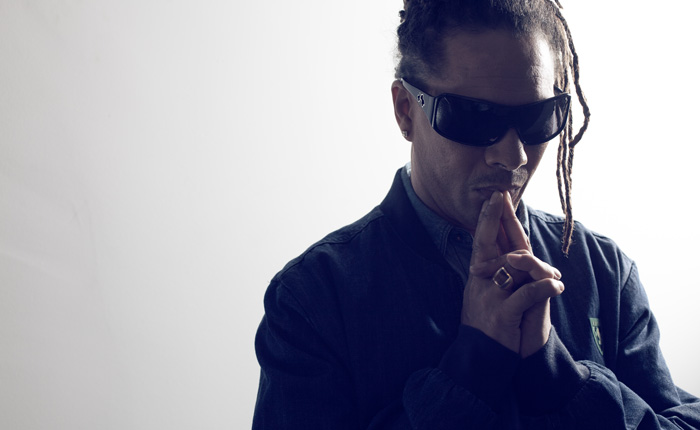 After a lifetime in Bristol, you’ve moved to London. Why make this move now?
I’ve always thought about moving to other countries or to a big city. I got an offer from Metropolis, where my studio is, who are now my management team. It was a great experience to feel there was someone who had my vision and wanted to be a part of starting my new label. Being in Bristol, I got stuck in a rut. Now it’s nice to be right in the mix, in the middle of everything going on in London.

You moved out of your Channel House studios to your home in 2008. It’s a big shift from a home studio to a spread like Metropolis.
I used to get up, go downstairs in my boxer shorts, and start making tunes. I’ve never been in that environment where you see the same people every day and sit and chat. It’s a really good atmosphere. Everyone is so friendly. I’m enjoying going down the high road and going to work.

It sounds like Metropolis is exactly what you needed at this point—in both your life and your career.
It’s not just being in the studio. I’ve got my new label, Mansion Sounds. I want to make big tunes for big rooms. I’ve had great people looking after me over the years, and they taught me a lot about how the industry works. I got complacent in the sense that I left them to do everything. Now, I’m doing everything myself. That’s why the album is called Take Kontrol. I’ve got full control of every aspect of my business, and it feels great.

There are 25 tracks on the deluxe version of Take Kontrol. That’s a lot by any standards.
When you come back, come back big, innit? Some of the tracks are the sound that people liked back then, so I still have that in the bag, the familiar Roni Size sound people know me for. Take Kontrol allows me to be quite adventurous, quite modern day, and put something new on the table as well. I’m working hard, making new music every day at the minute. I’m enjoying it, and I’m hungry.

Despite not having a current release, you still were high up on the bill at last year’s Coachella. The Mojave tent was essentially empty when you got onstage, and you had the place filled and heaving in less than 15 minutes.
It’s been really difficult the last four years. I took a backseat from being in the limelight. One of the sacrifices that comes with that is I don’t get the main stages, and I don’t get the crowds that I feel I deserve. I’ve got myself to blame. I want to come back. I’m ready to be part of the party again. I’ve got a lot of work to do. As soon as you take a step back, there’s someone ready to come and enjoy your spot. I’m ready to work for that spot again. I’m looking forward to bringing something different to the table and headlining stages.

Even though you haven’t been regular with releasing music, your DJing calendar is very regular.
I’ve managed to maintain a presence in the DJ world. But as I said, I want main stages. I want to be at the top of the bill; that’s my goal. If I set any less of a goal, I don’t think I would do myself justice. I feel like I deserve to be on the big bill. I do have that history, and I have that passion.

How come you left the North American tour you were on with Rusko last year?
It was quite hard work for me doing those shows. Some people knew about me, but it was much more about Rusko and fair play to him, he’s done a great job. I wanted to see my audience support me, but they were not coming out. It was doing more damage than good. And I had get back to Bristol for personal reasons, so I went home.

You were on the EDM festival circuit for a minute a few years back. It feels like you pulled yourself out.
It’s very hard to stand out unless you have a record out. Some of the reasons why I took a step back was, what’s the point of me doing all these big shows if I don’t have an album out? Now, I have two albums coming out, and I have a lot to promote.

Much of the music now, especially in drum & bass, sounds like a throwback to the late ’90s, which was your heyday.
There’s nothing wrong with that, but I want to go forward. I don’t want to keep going back in that circle. People still think of me as “Brown Paper Bag” and the whole jazz thing, everything from 1997. As a producer, I don’t want to keep rehashing the same old thing. While I want to make new friends, I am going to sacrifice some friends because you can’t please everyone. I want to be on the main stages, so my sound has to be a big-room sound. I can’t just make rollers that are going to end up in front of 100 people in a club in Los Angeles. Well, I can, but I want to do big things, and my sound has to change and grow with that. As long as I’m still doing it, I’m happy.

You sound very excited about everything. It’s really nice to hear your enthusiasm.
It hasn’t felt this right since the days of myself and Krust and Die and Suv and Dynamite all being on the same page. We’ve gone our separate ways doing different things. Those relationships have a great history around them. I would never have believed our Full Cycle, Dope Dragon, V Recordings sound would have found such a great journey over the last few decades. History has been so great, but now, I’m ready for the next part of my journey, and this is it.

Massive Roni Size Rework Scores a Video From Joris Voorn: “I Was Inspired to Explore a New Medium”