By 1994, people had been waiting for something to break through on a global scale and give voice to the heady, gritty promise of electronic dance music. There were many great albums of this era, but Underworld were the first to pull it off in a way that shocked almost everyone. It was rock ‘n’ roll plugged into the microchip, techno with singing, and sin of sins: guitars. No one expected it to work, but it did. 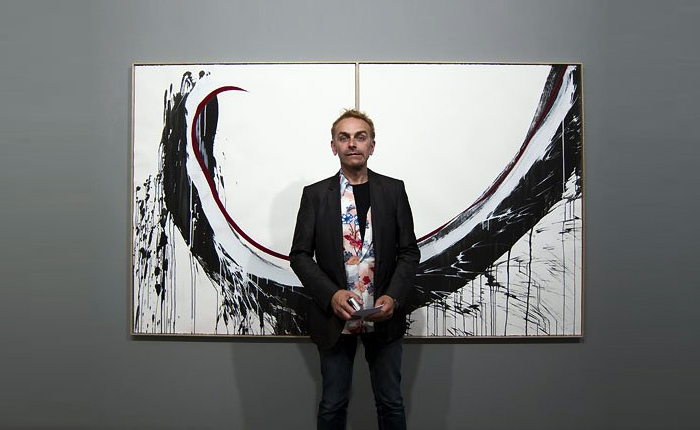 Dubnobasswithmyheadman also had some of the most mysterious lyrics of any genre, which remains the case 20 years on. Less William S. Burroughs and more “documentary,” as Hyde puts it, they’re the perfect shadows to Smith and Emerson’s blinding architectures.

“The lyrics to the songs—the words, the fragments—have their place in my memory,” Hyde says. “They also have their own meanings for everyone who hears them. This is something I don’t ever want to nail down. I like hearing people’s personal ideas of what they’re about far more than what they’re about for me or where they came from. However, let’s see what we can say, eh?”

Thunder, thunder, lightning ahead, hummm. Will you kiss me dark and long?… Filled with tainted girls and motel frills. What a laugh. You was done up there mate… I want to break it down. I want a wall of tears, to wash away years.

The description of motel frills and the switch to cockney, what was the inspiration of this scene?
Romford, Essex, East London. Frills—thrills.

“Mmm Skyscraper I Love You”

It’s known that a lot of this song was inspired by New York, including a flight above the city. But are the allusions to food and pornography part of the general flavor of the streets? Who are the “porn dogs” inspired by?
A night ride in the back of a New York taxi, logging all the things I saw on the street as we drove through downtown. Dogs have been a recurring metaphor for me. Dogs are hunter-scavengers. They also hunt in packs. On city night streets, there are other mammals that operate in a similar way. Can you name them?

Is the “Yes. Yes. Yes. Yes. No. No” inspired by the Bit from the movie Tron?
[Laughs] That’s Rick doing what he does great.

Talk to me, talk to my machine.

The instrumental “Surfboy” rip-curls with tribal drums and Jamaican-tinged electro soul echoing the birth of the web—surfers on an information ocean mirroring the rave generation’s spiritual search. What was the inspiration for the song title, and is there any specific meaning in the one vocal?
What meaning would you like it to have?

Like organelles separated by a centrifuge, the lyrics on “Spoonman” are musical cells in themselves. How were they inspired by New York, and do you still get inspiration for Underworld lyrics from your visits there?
$8 rubber rat on sale in a shop window as I passed in the back of that same New York taxi. Have you ever seen the film Taxi Driver? The monologue, “All the animals…” I was staying in New York recording with Debbie Harry and Chris Stein [of Blondie] at Electric Lady Studios on 8th Street, living at the Gramercy Park Hotel before it was cleaned up. The walk between the two at night was fabulous, dripping in colorful imagery. All I had to do was put my hand out the window and pull it onto the page. New York is the easiest of all cities to write in. It’s dripping with rich stories. I can only be there now for a few days, though, because I quickly suffer sensory overload.

Why “Tuesday,” or is it completely random?
Would you prefer another day?

“I need the comfort of a stranger. 18 years in a week. Like a razor kiss my wound. Cut me to open.”

Razors are a recurring theme in early Underworld, from “Tongue” and the “razor of love” in “Cowgirl” to “steppin’ razor” in “Dirty Guitar.” Why the obsession with razors? “Cut me to open”—is it in part suicidal?
[Laughs] Cruelty, exactness, precision, steely coldness, loveless. Razor of love? Or an eraser of love?

Connector in. Receiver out… Ride the sainted rhythms on the midnight train to Romford… And we all went mental and danced… And I feel so shaken in my faith. Here comes Christ on crutches… But all I could see was Doris Day in a big screen satellite disappearing down the tube hole on Farringdon Street with Whiplash Willy the motor psycho… And the light, it burns my eyes.

What is this song about, and is it inspired by one “dirty” night in particular, or several adventures?
It’s a mapped journey—snatching scenes, smells, sounds, overheard conversations, billboard posters half remembered, words that come into a drunk’s head wandering the night streets—to piece together a paper trail describing the state of mind of the collector, because he didn’t know how to express himself any other way. These are the things I’m attracted to in this state of mind. I will gather them together and show them to you, so that you can see how I feel… like the images I’ve posted every day on underworldlive.com for 14 years. What are your interpretations of the meaning of “Dirty?”

“Dirty Epic” was a song you fought to sing on. Rick resisted “plugging” you in. Why did you want to write lyrics to this song in particular? What was it about it that grabbed you?
I heard “Dirty Epic” pre-vox and felt a powerful attraction to respond to its call. My favorite electronic music has a strong emotional content. What that does depends on my mood, but I like machine music with some human roughness in there somewhere. This is something we first heard in Kraftwerk and have loved ever since.

Everything, everything, everything… I’m invisible and a razor of love… Why don’t you call me, I feel like flying in two… I scream so much, you know what I mean, this electric stream. And my tears in league with the wires and energy and my machine, this is my beautiful dream…

Where did the song title come from?
Rick said, “What should we call this? Have you got a title?” I looked in one of my notebooks and saw the word “Cowgirl.” “Yeah, great!” he said.

Razor vs. eraser: You can interpret the lyric as “eraser of love” or “razor of love,” and you see both used in the original music video. What is this lyric about, or is it completely open to interpretation?
Yep, open. Step inside and ride. Steppin’.

How does this song speak to you as a dancer, and is there a mind-body relationship between dance and words that you have consciously tried to free up?
In my favorite of Underworld tracks, there’s always a body relationship as well as a connection to the mind. The music writes the script. The rest is response using recall of memories, fragments of other dances I have seen since I was a boy, images from films, installations, paintings, photographs—all of them snapshots along a timeline, a continuous, mapped journey.

You flow like a river of bass vibration… Everyone is sleeping. Me and Miss Release sitting on a mountain… Bird is in a thornbush, a thornbush in my head. I’m a snowstorm. I’m a shaker. Sometimes I regret the things I’ve said… From Chelsea to Essex, in every room, in every sweet cocoon. Sometimes I feel her coming from the other side of the world.

Is this song literally about a “river of bass,” and like many of the songs on the album, is it in part about sex or sweet sensations?
It’s literally about whatever you feel when you feel it. A muse? A river? A love? Succulence? Calm? Peace between the ears for a while?

“Chelsea to Essex” charts a locus. What about these places evokes the slower reggae groove and the soothing optimism of this song? Are you singing to various tribes or classes of London?
West London—Chelsea. East London—Essex. Both very different tribes connected by the River Thames, which flows through them both, west to east and out to sea. Do you have a “You” who you would like it to be?

Japanese appears in a couple places on the album. Is there something about Japan being an island culture like England that draws Underworld, similar to Jamaica’s reggae?
Japan—beautiful, different, graphic marks, color palette unlike anything in the West, different rhythm of life, great vocal sounds. We travel there a lot, a place and a culture I love and feel connected to.

Is this song a prayer for world peace or environmental harmony?
The one song which made it onto the album from a previous set of tracks we scrapped. Harmony…

Underworld Are Streaming a Preview of Their New Album in Full