For those who feel the event penetrates their heart and soul, Burning Man has always been a spiritual journey. But behind that dusty curtain of playa magic is another legion of desert warriors—ones with an undying dedication to building a city out of dust, rendering it down to ash, and igniting lifelong friendships from its embers. 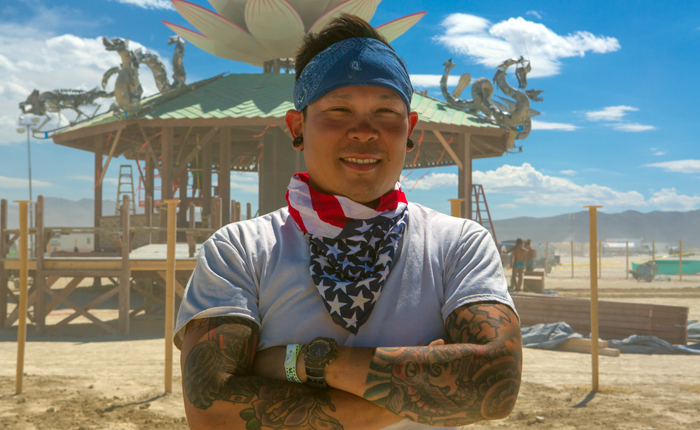 Imagine leaving your job, your family, your home and your paycheck behind to step into an environment of extreme heat, winds, rain and dust. The builders of Burning Man make these sacrifices and more, exchanging their blood, sweat and tears for life lessons and intense moments of self-realization.

The playa has a way of doing that, explains Charlie Nguyen, who has spent a decade in the dust. He has worked for Burning Man’s Department of Public Works (DPW) for eight years, but he has also worked the festival entrance and box office as well. This year, he was the art director for the stunning Mazu Goddess of the Empty Sea Temple, a project he developed in homage to his parents and in honor of Asian culture. This was the temple’s debut—as well as the debut of the Thaiwanderlust Camp—and the first large-scale art project to emerge out of Asia.

“People are giving up their lives and putting them on hold because they care about each other,” says Nguyen. “The event, the DPW, [and] the people that I have met because of both of these organizations have been second to none for me. The experience that I share with the people I work with is more enriching to me than monetary success. Sure, I may be putting my career on hold for up to six months a year, but it is so worth it to me.”

For Nguyen, the challenges faced before the Burn are unique to the experience. “It’s more of a journey of getting over yourself,” he explains.

As heavy machinery crew member Alpheus Underhill IV explains, “It’s about doing what is right. It’s about feeling like you are doing what you are supposed to. You get to work with people who not only appreciate what you do, but as an operator, are inspired and want to help them create their vision. It’s very fulfilling. You get to see the whole process from the beginning, to being at the festival, and then taking it down. At your normal job back home, people don’t care. You are there just to do what you do. Here, you play an integral part, and the artists really appreciate that you are helping them. You create something great out here, and you can’t really put a price on that.”

Each crew member on the playa has their unique story, yet they all share similar reasons for wanting to work in one of the harshest environments in the world. Underhill, a grip and rigger back home, has worked on the playa with the DPW for five years. When you factor in the time spent before, during and after the Burn, he spends as much as five weeks in the desert. He is presently part of the heavy machinery crew, which is found on the Esplanade, the main road. One can find this crew’s station set under cranes surrounded by, of course, heavy machinery. This year, Underhill helped with the construction of the Man, the Temple of Promise, the Mazu Temple, and other installations. For the Mazu, Underhill found himself becoming emotionally attached to the project, as Nguyen is his longtime friend and was the best man at Underhill’s wedding.

Without a doubt, this crew is one of the most highly respected at Burning Man—not only for their skill of construction and dedication to creating the city, but also for their generosity, helping others in need. This year, an RV caught fire in a camp, but the crew quickly extinguished the blaze and towed the vehicle to safety to ensure no injuries occurred. Broken-down art cars and wind-damaged theme camps also require assistance from this crew. 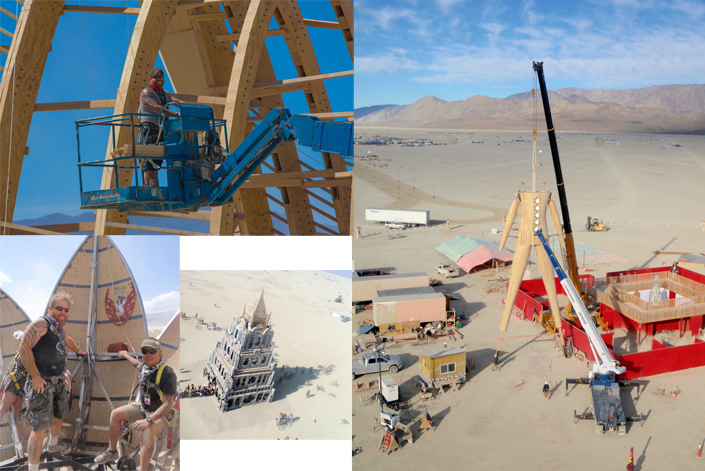 Underhill describes his heavy machinery crew with utmost respect, referring to them as a “beautiful group of misfits that are experts at what they do here.”

“They are all pros at what they do,” he says. “For a lot of them, I think this is their job in the default world. They are experienced Burners who don’t do the costumes or the blinky lights. But they do enjoy the work and the art. They enjoy working with the other crew members, which brings them out here. Once you start working, it’s not the event that keeps you here, it’s the people who you work with, especially before and after the event. The event becomes the least significant part of your experience.”

Underhill, like others who work for Burning Man, slipped onto the scene through fate. Following a successful stint as a builder for the band the Mutaytor at EDC 2004 in San Bernadino, Underhill was quickly recruited as a drummer. He then found himself as a “virgin” on the playa in 2004 with the band, building their stage and drumming to a show in the deep playa following the Burn.

It was during his time in the Mutaytor that Underhill met band members Nguyen and Karen Jacobs, aka “KJ,” who works in Human Resources for Burning Man. KJ sums up the dust fix: “Sometimes it’s so hard, but when you love what you do and you are so passionate about it, it’s a family business… I have a hard time conceiving what my life would be without this.”

Two years later, Underhill was rigging a show for Cirque Berzerk and met Joe the Builder, who worked as a head constructor of the Burn. He took notice of Underhill’s skills on and off the playa and hired him as a rigger for the Center Camp Café in 2009.

“Joe saw how I was working for these Burner-type groups, and I was a good prospect for coming in and doing the job for not that much money,” says Underhill.

In 2010, Underhill went on to be a rigger for the Man’s base—work he calls “intensive.” Underhill found himself drawn to heavy equipment, where he has worked for the last four years.

This year, Underhill embarked upon a spiritual mission and placed his mother’s ashes on the top of the Temple of Promise, at the top of the Mazu Temple, and in the head of the Man, along with pictures, letters and messages from his crew. He climbed the Mazu, urn in hand, with his sister Alexandra, his wife (me, Lori Denman-Underhill) and Nguyen. Underhill’s mother, Lucia, had passed the previous year from ALS. Underhill also placed his father’s ashes in the head of the Man in 2012.

The Temple of Promise is a catalyst for sending messages to loved ones passed. To many, it is the most emotional art project found at any event. Walking through its corridor revealed thousands of letters and photographs. During the temple burn on Sunday evening, art cars and attendees stand in silence, as compared to the burning of the Man, which erupts into a party-style celebration.

The smoke filled the sky, and one could feel a sense of relief, watching the messages rise out of the flames and into the star-studded sky. The Underhill family sat upon a platform in the path of the embers, the ashes of their mother’s ashes falling upon them. It was a moment unlike any other.

Burning Man Returns With a “Radical Ritual” Theme in 2017