Over the last several years, Jay Robinson’s output of bass-heavy house stompers and energetic breaks has been nothing short of prolific. The Welsh producer’s gritty sound design has opened up a world of opportunity that includes collabing with Stanton Warriors and Sinden, as well as taking on remix duties for Sharam Jey and Zedd. As an original member of AC Slater’s Night Bass crew, Robinson’s bassline pedigree has been vetted by the very best. His hard work in the lab is really starting to pay off, with his tunes reaching the biggest dancefloors all over the world. The spins have been steadily rolling in from big-timers such as Tiësto, Oliver Heldens, Tchami, and Armand Van Helden.

While we hope he will be making his way over to the States soon to bless us with his exceptional DJ skills—which have been given the stamp of approval by the legendary Laurent Garnier—we’ve got the next best thing to tide us over in the meantime: a beefy Metronome mix. In this blinding ride through electrifying basslines and foot-shuffling rhythms, we see Robinson deftly navigating the subwoofer-flexing beats.

We also had a chat about his journey from dance music fan to happy hardcore DJ to underground house phenomenon, as well as what inspires his dirt-nasty sound design. 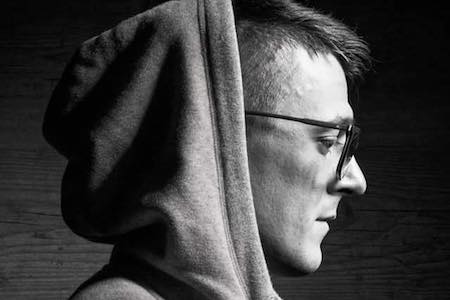 Last year, you played a set with the legendary Laurent Garnier. How did that come about?
Yeah, that was a pretty surreal day. I think I was digging around online track lists about five years ago and saw that Laurent had played one of my tracks on his radio show, It Is What It Is. I started to hassle him on Twitter and then got ahold of his email address and kept sending him music. Then, he played almost everything I sent him, and I kept getting messages from people I know from all over the world who heard him play my music! He asked me personally to join him for a back-to-back set with him, Copy Paste Soul, and Jackmaster—couldn’t really say no to that sort of offer!

You’ve spent a lot of time in France since. How’s your French?
Terrible, haha! I know a few annoying phrases I’ve picked up over the years, but nothing useful. I’m usually with my friend JM (co-producer of my track “Hussle”), and his English is incredible, so he is forced to act as a translator!

We hear there’s some downtempo music on the horizon from you. How often do you step outside of house and breaks?
Yeah, there’s a ton of downtempo stuff sitting on my computer. I probably work on non-club music at least once a week. Every so often, I’ll spend a few weeks making only more abstract stuff. I think club music can get a bit overbearing when you make too much of it—plus you can work out more unusual techniques when you’re making music that has no overall aim.

You have such a rugged and raw sound. Is that something you work toward?
I grew up listening to tapes. I really like when things sound a bit rough and dirty, so I try and keep my music sounding like that. I don’t like things to be too clean or precise. I think music loses its emotion when it’s too scientific.

You’ve been making music for quite a while now. What compelled you to start writing dance music in the first place?
I was always into dance music. The first album I ever bought was the Prodigy’s Music for the Jilted Generation. I actually started off DJing hip-hop when I was 15, and then gradually got into happy hardcore, then found house through that. I had a Ministry of Sound compilation called Nasty Dirty Sex Music that changed everything for me. Once I heard artists like Switch, Sinden and Hervé, I didn’t want to do anything other than make house music with a big bassline!

Are you from a particularly musical family?
My direct family all absolutely love music, but none of them play instruments or anything. I have an uncle and cousins in Newcastle that are all guitarists and singers. My dad always asks why I haven’t got any music on if he comes ‘round and nothing happens to be playing at the time. My parents did let me take piano, violin, cornet, and guitar lessons when I was growing up, but I always got bored of just making one sound.

You said in an interview recently that you got sidetracked from making music that fits you when dubstep started to hit. What led you toward those more inspiring sounds?
I think I got a bit lost, if I’m honest. I kind of forgot why I was making music in the first place. I made the track “Knuckle” and pretty much instantly knew that I wasn’t meant to be doing big room or dubstep, because it wasn’t making me feel anything. As soon as I switched back to the more underground bassline lead stuff, I felt much more inspiration to make music and start to develop my sound more.