L.A.’s Valentino Khan is part A-list producer for the likes of Bruno Mars and Tyga, part EDM creator—with his fingers in everything from hardstyle to moombahton—and mostly mustache. Rarely are such versatile producers so good at, well, everything, but Valentino’s abilities consistently place him as one of the most uniquely minded studio junkies around. Now with his new In Khan We Trust EP out on OWSLA, a new tour with Skrillex, and the debut of his video for “Make Some Noise,” Valentino seems more poised than ever to leave his mustached mark on music.

We’ve known each other online for a long time, but we just met in real life the other month. I made you show me your driver’s license to prove your actual name is Valentino Khan.
Yeah, I just stuck with my own name. My birthday is the day after Valentine’s Day, and a lot of people think it’s related to that, but it’s not. My parents had actually picked out my name before that. One of the other things I do is produce for artists like TI, 2 Chainz and B.o.B, so it made sense for me to stick with my actual name rather than adopting an EDM alias and a hip-hop alias.

Is your background more hip-hop versus the dance world?
It is. I was producing hip-hop for a while, and everything came together at the same time. I hadn’t gotten into dance music until around 2007, when I heard Justice’s “Waters of Nazareth.” I started to listen to it more, and then eventually I wanted to make it. One thing led to another, and I’m here now.

“I always wanted to do a video where alpacas were a big part of the story.”

You have a new EP that just came out. How would you describe the lead single, “Make Some Noise?” I have no idea how to categorize it genre-wise.
I like to make stuff like that, so it’s cool that you say that. I always try to make stuff that’s a little genre-bending. The first part borrows a lot from hard house, and the second part is almost hardstyle. Then there’s a trap switch-up at the end. I like making things that people have trouble defining, and I think that’s cool. I just really want to make unique music rather than doing something cookie-cutter. Not that there’s anything wrong with that, but this is more exciting for me.

The video for “Make Some Noise” just came out as well, and it features a rooftop party interrupted by Godzilla alpaca?
I always wanted to do a video where alpacas were a big part of the story. I don’t remember if it was intentional or not, but after seeing the first storyboard idea for the video, I was totally on-board with the idea [of a rooftop party]. It’s pretty cliché these days to make a video where you’re watching a DJ set with a big crowd, so everyone was down to have it be a fake-out. It was also dope because they had a stunt coordinator helping me sell all the high-action moments to the camera. Thankfully, the green-screen makes me look a million times more athletic. 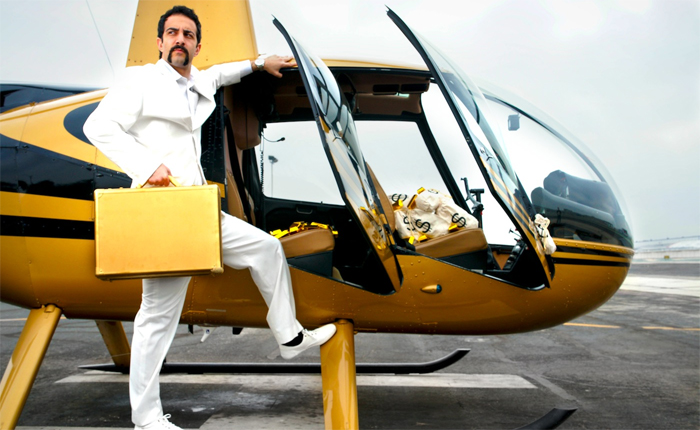 You recently went in the studio with A-Trak and Lex Luger.
Yeah—both of those guys are really dope to work with. We worked on some Low Pros stuff, taking a lot of hip-hop sounds and flipping them. It’s still very hip-hop, but it’s stuff you can also play out in a club environment. It was a dope experience. I’ve known Alain (A-Trak) for a bit, but that was my first time meeting Lex. Being able to sit at the keyboard and jam with him was an amazing experience.

Here’s the million-dollar question: Does Lex Luger use the Lex Luger sample pack?
You know what’s funny? When we were working on a track I was like, “Oh, this needs a snare roll.” I took out a kit—which was the default trap kit that I think a lot of producers use—and I said, “By the way, Lex, I’m pretty sure half of these drum samples are stolen from you.” (Laughs) He’s cool with it. It’s more of a head-nod to him that everyone uses his drum sounds.

You’re going on tour with Skrillex again. Do you have any stories from being on the road with him?
The first night I ever toured with Skrillex was in Minneapolis, Minnesota. It was a venue called First Avenue, which I think was where they shot Purple Rain. I knew Dave Chappelle was in town to play the same venue after we played there, and during the show we heard rumors that he was around; then he actually came backstage! He was the coolest guy. I never take pics with anyone, but damn, Chappelle Show—that’s the comedy my generation grew up on. Afterward, he asked us to go party with him, so we met him at another club that was a couple blocks away that stayed open just for us. Dave pulled out his iPod and started playing Kanye West and Prince; then Skrillex joined in, and they went back-to-back. It was the craziest experience ever. We were buzzed but made a conscious decision to not get wasted because we all wanted to remember it.

“You want to be able to be happy and know that you did it the way you wanted to do it. That’s way more rewarding than catering to somebody else’s needs.”

Do you feel that negativity is increasingly becoming a problem in dance music?
The bottom line is, there have always been people that will give negative comments. The internet is the place where you can have all faith restored in humanity by seeing how many people will help each other for free, and you can lose all faith in humanity by seeing how many people will have the most mean, racist, negative comments. I don’t think that anyone who gets to the top of his or her game has the time to go and hate on someone’s work. Even if the track is horrible, who cares? There’s no point in responding. The same goes for blogs. I saw a blog the other day that called out an artist for having the worst album out right now. My thing is, if you really don’t support the music, you’re actually hurting the artist way more by not mentioning the release. For the time they spent writing that up, they could have written two pieces that showcased up-and-coming artists who need the exposure.

Where do you think dance music is going in the next five years?
I think it’s going to get more pop-friendly. That’s realistic. A lot of current pop records are structured like dance records, and vice versa. This used to be a really underground genre, and you used to be really cool if you knew who Justice was, or who Boys Noize was, and we’re at the point where it’s gotten more exposure. I think we’re going to hear more records that are full songs, with lyrics and higher production value. It’s going to grow exponentially—not just in popularity, but in musicality as well.

Any advice for other producers looking to make a name for themselves?
You have to be living out your own vision. I always tell people: It’s important to have success on your terms. You don’t want to make something creatively that’s someone else’s idea of what you should sound like. You want to be able to be happy and know that you did it the way you wanted to do it. That’s way more rewarding than catering to somebody else’s needs.