It is May 20, release date for Afrojack’s full-length album Forget the World, and the 6’8” superstar DJ is keeping a packed schedule here in Los Angeles. First was an appearance on the Arsenio Hall Show, but now he’s firmly planted at the G-Star boutique on Rodeo Drive in Beverly Hills, where the line to see him wraps around the store and into the courtyard. Fans are here to snap a photo, get a signed CD, or—in the case of one young admirer who is moved to tears at meeting his hero—share their story of how the Dutch-born DJ inspired them.

“Today we have the number-one dance album in the world,” he says triumphantly to his fans. 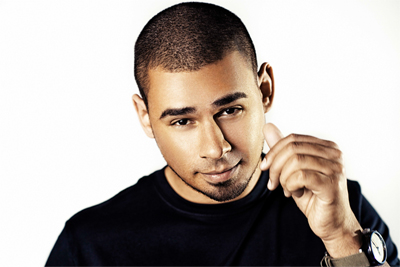 It is a message he repeats later that night—to loud applause—when he takes the decks around midnight at L.A.’s Create Nightclub for a release party. But our story with Afrojack begins not as his album hits number one, but as he is readying it to share with the world. Two months earlier, he appeared at the Hollywood Palladium as part of an event supporting a local radio station. Before heading to the venue, he invited us over to a small Hollywood studio for an advance listen of what would become Forget the World. While smiling, chain-smoking, and rocking out to the music, Afro explained his inspiration for the album and shared his thoughts on a wide variety of subjects, from deadmau5 to social media.

There are 7 billion people in the world. Do you really think they care what the fuck you do? Just focus on your own life.

What were you looking for in making this album?
It felt so good for me to do this album, because there’s been so much saturation with new producers. They all do the same thing. Every song has the same drop. I don’t want to do that. Of course people say, “I want to go back to that old-school, dirty Dutch Afrojack sound,” or whatever, but I only made two or three of those songs. Now with this album, I have complete freedom to do whatever I want, and I’m happy with it.

I spent time with deadmau5 recently for his new album, and he also very much wanted to make a complete project.
We’ve had our differences, and he has not said nice things about me in the past, but he’s gigantic and a fucking great musician. I do feel like he is the Nine Inch Nails of the new generation. Skrillex, too. That’s what I tried to do with this album. I like all styles of music—I like hip-hop, I like trap—but for this album, I wanted to put the real me in there. I see people tweet, “My mom just walked into the kitchen and was playing ‘Take Over Control’” and I think, what the hell happened? That’s the coolest thing, bringing generations together.

My grandma is really active in bridge, the card game, and sometimes she comes home, and she’s like, “I was talking to my friends, and they all love your new song.” So my mom likes the song, my mom’s friends like the song, grandpas and grandmas like the song, people on radio like the song, and when I play it in the club, it goes crazy. To me, that’s doing exactly what everyone says you can’t do. People say, “If you make commercial music, you can’t play it in the clubs anymore.” But it does get played in the clubs. I can play it for tens of thousands of people, and my grandma likes it, too. That’s what I wanted to do. I wanted to find my own way in between all these things and still have it sound different.

Do you still connect with artists via Twitter?
Yes, I still tweet. I recently sent Missy Elliott a direct message saying, “You are god.” She’s one of my biggest inspirations ever—especially the way she handled herself coming up and then killing it along the way. But yes, I like Twitter. I like talking to the fans. I like being overly real because in the press, everything always gets changed. I still refrain from saying certain things … everyone is restrained when they’re on Twitter because they want to have their followers and likes. You see it with the internet mafia—the professional haters that have tens of thousands of followers. They would never say something nice about someone because they know that’s not cool. They want to be cool because everything has to be cool, and in my entire life, I’ve never been cool. I’ve always told everyone, “Don’t try to be cool, just be yourself. If you’re cool to yourself, you’ll be cool to your friends. Might not be cool to the rest of the world, but since when are you living your life for the rest of the world?”

I’ve had that conversation with so many artists, and I feel like if you try to be liked by everyone as an artist, you suck. If you’re pleasing everybody as an artist, you are doing something wrong.
Yeah, that’s true. I feel so much better about myself now. (Laughs)

It’s just a good rule of thumb. If you try to please everyone, it’s not honest.
You forget your own life. That’s why I called my album Forget the World. There’s a booklet in the back where I wrote specifically what I mean, because no one ever explained to me or inspired me to know that it’s okay to let go. You do not have to live your life for the world; it’s your own life. There are 7 billion people in the world. Do you really think they care what the fuck you do? No, so why the fuck would you live your life for them? Just focus on your own life. I posted a picture on Facebook of me having eggs for breakfast, and someone doesn’t like eggs, so he dislikes your picture. People are living their lives for a “like.” “Look at my sunset, I’m having a beautiful sunset.” It’s funny though, I get comments sometimes for posting pictures of private jets, but if you were going on a G6 tomorrow, wouldn’t you be like, “Oh my god, this is so cool, I’m taking my whole family on a G6!”

At the time I started, no one knew what a music journalist was. Did you face similar doubters or questions when you started talking about becoming a DJ?
When I became a DJ, people were like, “Are you sure about this?” The reason I want to do this is because now my voice is heard by lots of people, and everyone is looking for an answer to life. I’m not saying I found the answer, but at least I figured out how to make my own life really happy, and that’s by doing what I love and giving up what I’m supposed to love according to the rules of the world. By doing this, I became who I am today. I am still as happy as when I started eight years ago.