Wise ones say a couple that plays together stays together. For producers and parents Laidback Luke and Gina Turner, electronic music was the matchmaker, and the studio was the set for love. 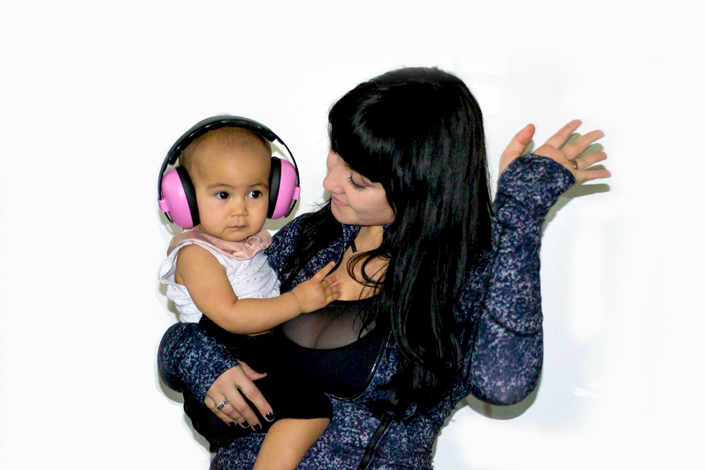 The couple—who hold more than 30 years of combined experience behind the decks—are ready to rock out at Insomniac’s Escape: Psycho Circus in Southern California this Halloween, which follows shortly on the heels of their three-year anniversary.

“Gina is a tastemaker, a DJ geek, and a musical connoisseur at heart, all wrapped up into a beautiful woman. There’s my dream girl right there! DJ wifey material.”

It was around 2008 when Laidback Luke (born Lucas Cornelis van Scheppingen) and Gina Turner became fast friends in an industry where they played many of the same gigs. Not surprisingly, music played a big part in sealing the deal.

“Before we were dating, I was playing Luke some really weird, random music, and he would ask me where I found it,” Gina explains. “He said that my taste in music was amazing, and he had to get me in the studio.”

“Gina is a tastemaker, a DJ geek, and a musical connoisseur at heart, all wrapped up into a beautiful woman,” says Luke. “There’s my dream girl right there! DJ wifey material.”

It wasn’t long before the duo started to play music together under the alias Nouveau Yorican, which grew to become a proper side project. They still play back-to-back nowadays, but under their own names.

“We still make music together, even though we are on very opposite ends of the spectrum,” Gina says. “I play techno and house, and Luke keeps it mainstream. But when we play back-to-back, we keep it techno, so that is a really fun thing to do with my husband.”

In addition to their Escape appearance, Luke and Gina have upcoming b2b sets at Output in NYC during the BEMF (Brooklyn Electronic Music Festival). Turns out being on the same bill has always created unique opportunities for the couple.

“Luke proposed to me on the airplane on our way to Florida to board Holy Ship! for New Year’s 2012,” Gina recalls. “It was crazy. He got on the loudspeaker and asked me.”

The couple announced their engagement at Holy Ship! and married October 1, 2012. They currently split their time between Amsterdam and New York, where they reside with their 18-month-old girl, EvaLina. Luke has two sons from a previous marriage who reside in Amsterdam, so the couple travels there often with their daughter.

Aside from touring and mothering, Gina also runs the label Turn It Records, which she founded in 2013. Following a break for baby time, she is planning a relaunch with new releases within the next couple months. As for Luke, he released his first single, “Let It Go” (featuring Trevor Guthrie) off his forthcoming Focus LP. The two sat with us to talk about all things love, life and DJing.

Luke, can you tell the story of how you proposed to Gina on the plane to Holy Ship!?
Luke: I had to come up with something special! Obviously I’m on planes a lot, and it seemed like the most special way I could overwhelm her. During boarding, I just took the flight attendant aside and told her my plan. The flight attendant was totally down and loved my plan. Just after takeoff, I told Gina I needed to use the restroom, and then the captain came on the speaker and told everyone they were going to pause the in-flight entertainment system for a moment for an announcement. “This is Luke. He’ll be taking over the intercom for a special message.” And the stage was all mine! Gina was totally overwhelmed. Being the tough cookie she normally is, she came to the front of the plane with wobbly knees and started shedding tears straightaway! In the front of the plane, I went down on one knee and proposed. Luckily, she said yes!

Gina, you describe your style as house and tech house?
Gina: I love techno and tech house, but not too serious. You know how there is this pretentious aspect to techno? I’m anti that. I will play that random hip-hop track, because it’s about having fun and not being so serious all the time.

So it’s not about being so German?
Gina: Yes, exactly.

Luke, what do you love to play, and would you say that your style has changed much over the years?
Luke: I would just describe my music as fun, energetic and commercial. Commercial is a deliberate choice. Having roots in techno, I quickly discovered the poppier audience were more open-minded; can you believe that? A quick example: I couldn’t play or mix any known tracks into my techno sets, whereas a more commercial crowd would accept me playing a techno track. With a poppier audience, I can get more musical, too, and implement more musical elements, instead of keeping it minimal and basic.

Who are your current influences?
Gina: My longtime influences are Derrick Carter, John Tejada and Chill Without Hats, who are amazing and everyone should look up. I am also inspired by tribal drums and Latin influences.
Luke: Anyone that goes in fully passionate. It’s that simple, really. I can’t name-drop, because that can be ever-changing. When passion shines through, it inspires people.

“Being a DJ is one of the best gigs for a working mom.”

Gina, how is it being a woman in the DJ dance scene? Is it pretty supportive? Is it a man’s world?
Gina: I try as hard as I can to not think about all the things that surround being a female DJ. I try to think of myself as a DJ who happens to be a girl. Unfortunately, the sad truth is that it is a man’s world. However, I have a group of girl DJs who I am really good friends with who are very supportive. We have this amazing camaraderie, and it’s like a sisterhood. But yes, I am a minority in the EDM world. But that’s cool; it makes me more special! 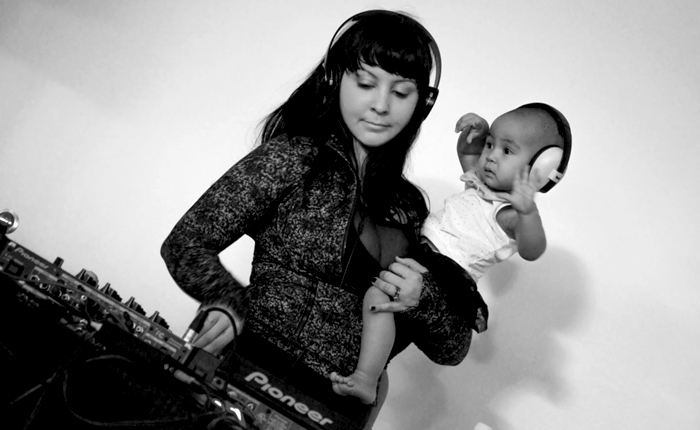 How do you handle being a mother and also traveling the world as a producer and DJ?
Gina: Actually, being a DJ is one of the best gigs for a working mom, because I get to spend all day with my daughter during the day. I put her to sleep, then my mom watches her while she sleeps. Then I go DJ, and I come back from my gig before she wakes up. It’s amazing; she doesn’t even know I am gone. I breastfed for 16 months, so she has traveled with me to almost every single one of my gigs.

If it’s a one-night gig, I leave her with my mom and fly out and back. But for Escape in L.A. on Halloween, I will take her, because I do a show in Hawaii right before that. So of course, I am going to take her to Hawaii! The trick for international travel is to just keep her on New York time, so there is never jet lag. During my downtime, I do yoga and teach the practice as well. In Austin, Miami and Dallas, for example, I taught before my DJ gigs. So people come to my class, then dance to my set, which is really cool. It’s great to have a grounding and spiritual and accessible practice to go alongside my hectic DJ life.

Luke, what about you?
Luke: Combining all of it is, well, hard work. That’s what I’ve always lived by and have tried to balance everything out. To be very honest, I’ve always been afraid of the real DJ life. Losing yourself in the turmoil that’s getting wasted every night, bonding with strangers, sex with groupies, losing a daily pattern. But on the other hand, I’ve always been very scared of real life, too—real life, as in going to the office, having weekends off, growing old on the couch while being very bored with your family. The way my life has been, it has just been a good experience of both lives.

Do you tag-team in the studio and tag-team when caring for the child?
Luke: [Laughs] We kind of do, but EvaLina is my third child. I had some heavy times raising my two boys, and I didn’t want to go into that again; so Gina takes it easy on me, and I’m very thankful for that. I get most of the play time now.

What is your home life like? Is there a studio your daughter gets to play in or instruments she plays?
Gina: Oh, yeah. She loves music and is always singing and dancing. I DJed until I was 37 weeks pregnant, so she has been hearing the vibrations of what I do and what Luke does since the womb. She is always into what we are doing musically. She loves to play with our DJ mixer. When I am DJing, she raises her hands in the air.
Luke: Yes, all of that! She’s a little ham. She loves being the center of attention. We already see she has a big love for the camera and listening to and performing music.

Have you taken her to festivals?
Gina: Yes, I took her to SXSW, which was cool. I definitely want to try to bring her to Ultra, because she was born during that event. Luke had to cancel his set. But yes, she has seen both of us DJ.

What’s your most amazing memory of taking her to a show?
Gina: My first gig off of being pregnant, I had to breastfeed every two hours and couldn’t really do anything. Rob Fernandez—the promoter for Pacha, who recently passed away—was a very close friend. He was joking, and he would text me, “What is your first DJ gig going to be?!” I wasn’t booked for EDC New York because I had just had a baby at the end of March, and it was in May.

So randomly, I get this text message two weeks before EDC New York, and it was Rob. I knew what he was going to ask. He added this whole new area that year, where there was a VIP indoor area. Rob begged me to come and play. I literally brought my cousin, who was babysitting for me at the time. I DJed for two and a half hours and, right when I finished, ran off to breastfeed. It was hilarious. That stage where I played ended up being so fucking amazing, because it was pouring rain and my area was the only indoor set. Everyone and their mom was there to hear me at my stage.

Would you encourage your child to go into the same field of work as you?
Luke: Absolutely! My youngest son, who’s 12 now, wants to become a DJ, and that’s awesome. We know everything that [one] has to do in this field, and we could pass along the experience easily. But no matter what job my kids would like to do, I’ll always be there to support them. When they are happy, I am happy.