Hardstyle didn’t let up in 2015, improving on its already impressive gains from the year before. Innovation and experimentation was the rule rather than the exception. Two guys from Italy saw it all happen as they jetted from festival to club around the planet: the duo known simply as “TNT”—the legendary dynamos Technoboy and Tuneboy, aka Christiano Giusberti and Antonio Donà. To keep up with the maddening pace of hardstyle developments in 2015, we asked the guys to identify one track for each month of the year and had them put together a mix for us with said tunes, in chronological order. Before you hit play on their exclusive DJ mix, dig into our chat with the guys about the hardstyle genre they champion, their place within the scene, and where things are headed for 2016.

“Maybe it was possible a couple of years ago, but now, definitely—the US crowd is on page, hardstyle-wise.” 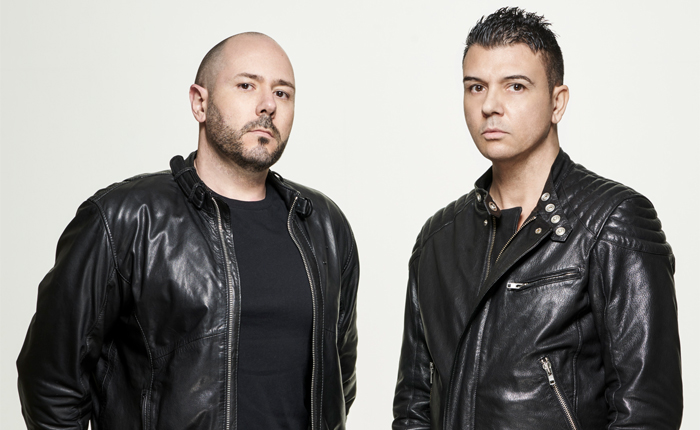 What big developments did you see in 2015 for hardstyle?
Technoboy: Hardstyle is becoming something concrete in parts of the USA. It’s a development we would like to think we’ve played a part in.

You witnessing this, did that change anything for TNT?
Technoboy: When you come to a country where things are so new, there is a balancing act between what we would like to do and what fans would like to hear. Two years later, we can play whatever we want because the people are passionate about the sound. They want to hear hardstyle in its complete form: soft, melodic, euphoric, and a bit rougher. Maybe it was possible a couple of years ago, but now, definitely—the US crowd is on page, hardstyle-wise.
Tuneboy: The crowd in Los Angeles is really amazing. We had the chance to play there a few times in 2015.
Technoboy: I was surprised to be at Nocturnal Wonderland in September on a Friday. I was skeptical in the beginning. But nearly 5,000 people showed up, which is absolutely a record. I don’t see that even in Europe sometimes.

What do you think happened in the life of the hardstyle fan in 2015?
Technoboy: Again, we like to think about this question in regards to the United States, because they now have hardstyle. Fans can go back and get passionate about the way the music and scene developed first, let’s say, 10–13 years ago.

If I think back to when I was a teenager, I would have thought, “Wow, a new genre that I can really get curious about, fall in love with, discover, rediscover, going deep on some of the aspects that have been there since day one.” I think it’s important to make all the connections that brought the first sound of hardstyle to become what it is nowadays.

Let’s talk about the tracks you selected for your year-in-music mix. Is there anything you want to mention before we dive into the specific tunes?
Tuneboy: Basically, these are the tracks that we love to play and support, but also tracks that we like to listen to.
Technoboy: They’re functional on a dancefloor, but also listenable on their own.

Coone “Words From the Gang” [January]
Technoboy: Not every track needs to feature a speech, but this was a really cool one, a classic. But sometimes classics can only be played in “classic” sets. So to have an updated version of something that you loved to play again and again…
Tuneboy: It’s like having a second life for the same song.

Brennan Heart & Jonathan Mendelsohn “Follow the Light” [March]
Technoboy: It’s nice to have a sing-along track that people will identify and recognize instantly after the first time they hear it.

Darren Styles & Re-Con ft. Matthew Steeper “Rest of Your Life” (Da Tweekaz Remix) [April]
Technoboy: This combines the best of two worlds. We were hoping to hear a hardstyle version of this track, and ta-da! Da Tweekaz did it.

Tatanka “DIS-CO-TEK” [May]
Tuneboy: This is a little bit rougher than what we usually play, but…
Technoboy: It fits.
Tuneboy: We saw this track played in front of a big crowd, and…
Technoboy: It blew the roof off. This is one of those tracks that you need to see and watch the reaction to at a big event with a big crowd before you’re going to give your final judgment.
Tuneboy: It’s a banger.
Technoboy: It’s like, “Wow. I want to have this instantly and immediately!” Of course, when Tatanka makes a track, he previews the test mix, and possibly you’re going to receive the final mix six months after that. I think we’re still playing the test mix!

Audiofreq “Audiophetamine” [June]
Tuneboy: Audiofreq is a master in sound design, and he really gets a big technical score on this reinterpretation of the classic hardstyle-kick-and-reverse-bass combination.

Noisecontrollers & Bass Modulators “Solar” [August]
Tuneboy: A saxophone in a hardstyle track.
Technoboy: The first time we listened to this, we were like: “No, I can’t believe this—I’m not listening to this. Come on… they are making fun of us.” The second time you listen to the track, it’s like: “Actually, it’s not really a joke.” Then the next time you listen to the track, it’s like: “Oh, I now understand how good this is.” We always consider hardstyle a platform where you can build whatever you want. There is no limit; it’s your imagination, as an old track of ours says. Honor and glory to the Noisecontrollers and Bass Modulators for this release.

Donkey Rollers “The Sound of the Beast” (Dr. Rude Remix) [September]
Technoboy: This is a super reinterpretation of a classic.
Tuneboy: It’s one of those tracks that you always hope a DJ before you didn’t already play.
Technoboy: It has everything. I loved it the first time I heard it. It was completely, absolutely…
Tuneboy: Mind-blowing.
Technoboy: Like, okay, I want to play this… I want to play this two times in…
Tuneboy: A set.

DJ Isaac & Crystal Lake “Stick Em” (Hard Mix) [October]
Tuneboy: It’s easy. It’s functional, and people react immediately to this track, even with the same “da-da-da-da.” It’s cheesy, and people love that.
Technoboy: They slowed down the middle, to then speed it up again by the end. People like when you slow down a part of the track but keep it hard anyway. They change the way they dance, and it’s fun to see that.

TNT “Flash” [December]
Technoboy: It’s no secret that we were inspired by some EDM tunes that featured cowbells. It’s never easy to use old sounds and make them credible in today’s music, but I think we succeeded.

The old bringing in the new is a good transition for your 2016 predictions. What do you see in our future?
After meetings like the Winter Music Conference or ADE, people will post something like, “Yeah! Finally this will start—or this is the end of this! The music will finally get back to being here, being there—being serious again! Kids, finally you’re over blah, blah, blah, blah.” And you know what? Nothing happens like what these guys are ranting, blasting out and blabbering on via all those social media channels, blah, blah, blah, blah. At the end of the day, everything still exists, and everything is still working.

What about specific musical trends we should look for?
People will keep being brave and experimenting, opening doors that maybe at the moment nobody can see, or doors that we can see but are still firmly closed. Let’s open those doors together, all together in every genre.

If You Like Axwell / Ingrosso, Paul van Dyk, and Technoboy, You’ll Love…