If you attended last year’s EDMbiz Conference & Expo at the Cosmopolitan of Las Vegas, chances are you had your mind blown by Tatiana Simonian and her presentation of Nielsen’s first Electronic Music Audience Insights Report (refresh your memory here). In it, she unveiled a full breakdown of the electronic music fan—who they are, where they live, what they spend money on, what they don’t spend money on—and talked about how big brands are using data to more effectively market to the EDM audience. The presentation was so engaging that EDMbiz has asked Simonian back this year, when she will dive deeper into the data and follow up on some of last year’s projections. We caught up with her in L.A. to get a little preview of what’s to come. 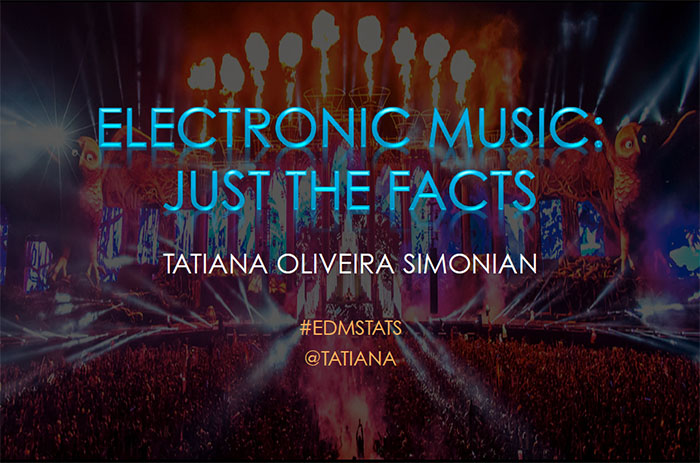 Let’s start from the beginning. What is your job at Nielsen?
Having been an artist [and being] married to a musician, I really care how artists make money. I noticed that brands are a giant source of revenue for artists, more than anyone else. A lot of times, they need help knowing how to activate in the music market. They’re not from that world, so sometimes it doesn’t seem natural. By the same token, a lot of music folks don’t know how to work with brands, and they need to learn the power of data and communicating their value when they don’t have revenue numbers. My job at Nielsen is bridging the gap between brands and music so that they’re able to know the value of those partnerships and they can stay in that phase. An example of that is the work I’ve done with 7UP, which has been written about in Forbes and other places.

“It blows my mind that there are certain brands that will spend 10 or 20 million sponsoring concerts and never measure any of it, then overnight decide we don’t want to be in music anymore.”

7UP got into the EDM market, but they did so with a lot of planning, and they used data to strategize their move; then they used data to calculate how successful their investment was. They were able to see that they actually sold more 7UP because of this activation, which made them decide to spend more money in this space and devote more resources to electronic music over the next couple of years. That’s the power of data in music—it’s keeping revenue in the music industry and adding more value all around.

Could you make the case that, as far as genres go, dance music is definitely at the forefront of what’s driving a lot of brands in the marketplace?
Yeah, absolutely. I think that from a numbers standpoint, it’s because you have a fanbase of music lovers who are primarily millennial, as well as 29 percent Hispanic. In addition to that, they’re the most diverse fanbase—they over-index in African American fans, in Asian fans, and even in Native American fans. So it’s sort of like, if you’re activating in electronic music, you’re getting a really young, vibrant fanbase that doesn’t look like any other fanbase. And they’re very loyal.

What would you say are the biggest things that brands do incorrectly when they try and tap into this kind of music? The 7UP example is a great one, but when brands “do it wrong,” what are the biggest mistakes they’re making?
It’s the same thing they say about tech companies that make the wrong move. It’s twofold: know what you do well and try to do that, but don’t do someone else’s thing for them. What I mean by that is that sometimes tech companies try to do music things, and they don’t consult music people. Sometimes brands try and get into the music world, and they don’t ask music people or creatives, and they do something that makes sense to their brand but doesn’t translate to the fans. Secondly, use data to maximize creative decisions. If you’re spending seven or eight figures on a campaign, you should absolutely be measuring it so you know what’s working and what’s not.

It blows my mind that there are certain brands that will spend 10 or 20 million sponsoring concerts and never measure any of it, then overnight decide we don’t want to be in music anymore. They have nothing to point to the fact that it was successful or not. If an artist is successful, it’s because they’re selling tickets. It’s because they’re selling albums. It’s because they were able to make enough revenue to know it was effective. They know whether or not they need to spend more time in that city, or if they need to focus their efforts elsewhere. It’s crazy to think that brands are sending crap-tons of money to music and never measuring any of it, then they’ll arbitrarily pull millions away from music because they don’t know what it was worth.

What was the most surprising thing you learned about electronic music culture when you pulled the data for last year’s presentation?
The diversity of the fanbase is really interesting to me. I didn’t really think about the fact that the fanbase is 29 percent Hispanic. Oftentimes in advertising, [dance music] is represented as a very Caucasian fanbase. This is a great example of why data can show you you’re doing it wrong—because the data said this is a more diverse fanbase than you know. I think that’s an important message to get out, because mass media can sometimes communicate truth based on assumption rather than data. 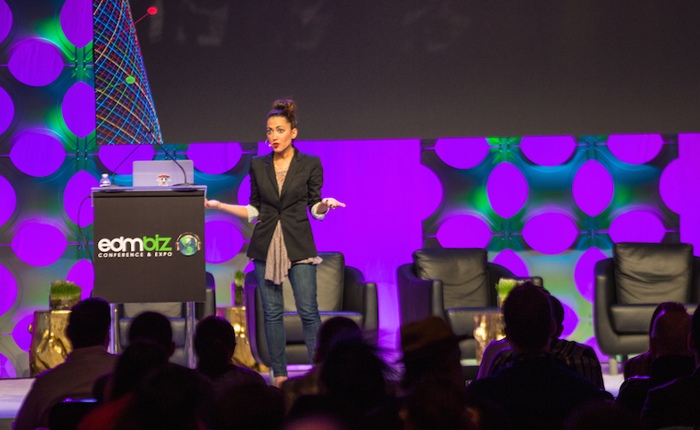 Some of it wasn’t as surprising to me, like EDM fans are considered more influential by their peers. They’re also more likely to be tech-savvy than other groups, I think because they’re making music digitally. I think the income differential is also kind of interesting. They’re either making under $25,000 or they’re making over $75,000, so there’s no middle class. It’s either you’re broke student status and you’re scraping up dough so you can go to a show, or you’re a professional and are super into this stuff and you can afford to go wherever you want.

What are you planning for this year’s presentation?
My work with 7UP was a direct result from presenting last year [at EDMbiz]. They saw me, and they wanted to do some work together. So I’m hoping to have my friend from 7UP present some of our findings from our work to show what it’s actually about, and my team is pulling some global numbers, since last year we did primarily US. We’re also going to be updating some of the data we have, and just talking about the state of the music industry. It’s important to look at the state of the music industry from a macro perspective so we see how electronic music fits in.

“These fans are far more motivated by the live experience than any other genre. For them, it’s not just about having the music; it’s about experiencing it with a large group of people.”

Data and trends obviously impact how brands spend their money, but does data have the power to change the course of a genre from a creative perspective? Everyone knows that the bandwagon carries a lot of cash, but back in the day, those decisions were always based more on popularity than anything else.
Data can always inform. Trends are going to do what they’re going to do; you never really know what’s going to happen. I can make guesses off probability. Like I know that electronic music fans stream more than any other group of fans, so they’re going to be far more likely to either adopt new streaming services or be really vocal with what’s happened to streaming services—an example being [what’s happened with] Madeon and SoundCloud. We also know that shares have risen, although comparatively speaking, they comprise a much smaller portion of genre sales than rock, which has a catalog.

That said, what’s really interesting with electronic music today is that it’s having a resurgence that we haven’t really seen since the ‘80s, when new wave was pretty big. With Avicii on KROQ and Zedd on major radio stations, I think it really speaks to the fact that EDM is having its most successful time, and that’s reflected not necessarily in traditional sales numbers, but it’s repped in consumption numbers. We can’t use the same metrics in the same way, because the metrics are changing. Today’s EDM fans aren’t really buying the records; they’re streaming the records.

Another thing that’s really interesting about this group of fans is that they’re far more motivated by the live experience than any other genre. For them, it’s not just about having the music; it’s about experiencing it with a large group of people. I think that will lead to more festivals coming about [and] more strategic alliances between brands and artists. We’re also seeing brands do the label thing now, like Red Bull and Converse. So I think what we can absolutely say is that EDM will probably push the innovation of the music industry more so than any other genre.

That’s very exciting!
Everyone always asks me, is the bubble going to burst? It’s not like we’re talking about the housing bubble. It’s not like there’s an interest rate that’s going to raise overnight. This is something that’s not going away; it’s always been here. It’s hit critical mass, but I think it lends itself to always being user-driven and inherently led by very influential tastemaker fans, and I really doubt that it’s going to get played out.

And Vegas. EDM is saving Las Vegas. It’s insane. Every hotel has a deal with DJs right now in order to get more people through the door. And the money they’re spending is unheard of. Everyone has been focusing on “Look how much Calvin Harris is making!” but no one’s talking about the fact that this is putting a new economy into Las Vegas that wasn’t there before. It’s something that city needed, because it was aging out. A lot of the shows you see are their attempt to skew toward an older population. That demographic may be gambling, but they’re not drinking as much as others. They may not be moving around the Strip as much as others. EDM fans will be consuming all over the city, not just in one place.