Aside from running around in togas, what do Aristotle and RuPaul have in common? Mentoring, of course. From philosophy to the arts, nurturing emerging talent is one of the few analog traditions thriving in our increasingly digital world. For the mentor, it is a way of giving back. For the mentee, it is often a life-changing break. Next to God, their families, and their agents, successful people often credit mentors with helping them become their better selves. 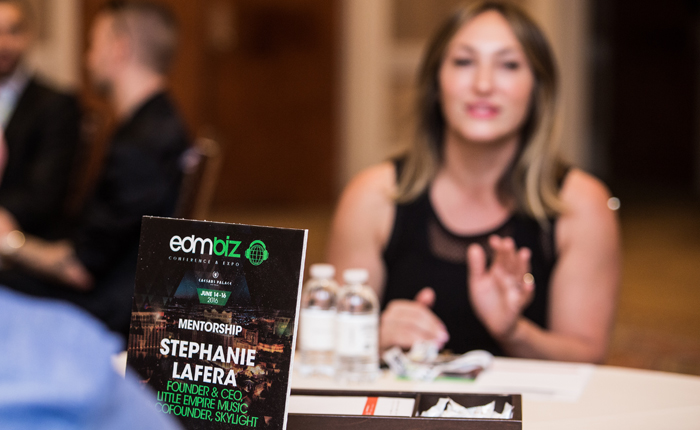 “I’m a firm believer in paying it forward,” says Alexandra Greenberg of MSO PR, whose roster includes some of the biggest names in electronic music, from Jean Michel to deadmau5. “Along my own career path, I had some wonderful people take me under their wing. It’s important to share advice and knowledge with the next generation as they make their way up.”

Stephanie LaFera—who has guided Kaskade, Galantis and others to international success—agrees: “I think about all the people who have helped me navigate the music business, and how just talking to someone who has been through it before can have a huge impression on anyone getting their start.”

For Stephanie, who founded Little Empire Music in 2007 and cofounded SkyLight in 2013, mentoring goes a little deeper. “Mentoring has always been a core principle in the company culture of Little Empire, and it’s the entire basis for the creation of the nonprofit Skylight,” she says.

Stephanie’s philosophy is evident in Little Empire’s handpicked roster and in Skylight’s dedication to empowering women. “SkyLight was created almost entirely with mentorship in mind, and it’s a philosophy we’ve stuck to: supporting aspiring females in dance music by providing mentorship, networking, and fostering a community of like-minded beginners and veterans,” she adds. “SkyLight’s inaugural mentorship program was actually at EDMbiz back in 2013, where we sponsored three entrepreneurs, provided them with admission and transportation to the conference, and paired them with a mentor for the week.”

This year’s program puts another twist on the conference experience. “The selected participants will join the mentors and have an opportunity to introduce themselves to the group. The mentees will then pair off with mentors and have 10-minute one-on-one sessions, changing mentors every 10 minutes until they have interacted with everyone.” The intimacy of the sessions gives the event an edge. “To be able to chat with an executive from a top public relations firm and then in the next breath speak with a Grammy-winning DJ/producer/songwriter—it’s an experience that should keep people on their toes.”

It’s also an experience Stephanie plans to continue. “We certainly hope to continue the mentorship program and allow it to grow and evolve as we learn what will most effectively help people. This is the first time we’ve run a program such as this. We realize we have a lot to learn, and we’re looking forward to the education process!”

Stephanie could have easily done a conventional presentation, but she chose the round-robin format to most benefit the selected mentees. “Rather than speaking in front of a crowd about my own experiences, through mentor sessions we can have face-to-face interaction, actually exchange ideas, and hopefully directly impact some young entrepreneurs in a really positive way,” she says, alluding to her own notable experience. Over the past 15 years, Stephanie has established herself as one of the most influential people in the music business. She has been key in helping EDM break through Stateside after decades as a European staple and has helped establish Las Vegas in particular as a hub for superstar DJ residencies.

Because of her extensive credits, Stephanie knows the work doesn’t end when the conference does. “Beyond just tapping into the experience and knowledge of the mentors, we understand that building connections is a huge part of what these sessions are about for aspiring professionals. Our aim with mentorship is always to continue to engage and support mentees well beyond the program itself.”

There may be some spirited running about in togas in Las Vegas this June, but hopefully some of it will be productive. If Stephanie’s vision comes true, some day you may find yourself driving down the Vegas Strip, past a marquee announcing an artist discovered at EDMbiz, booked at that venue by a manager who was mentored there as well.