Choose your future. Choose life… But why would I want to do a thing like that? I chose not to choose life. I chose somethin’ else. And the reasons? There are no reasons. Who needs reasons when you’ve got heroin?

Set to the driving rush of the Iggy Pop’s seminal 1977 single “Lust for Life,” the opening monologue to the movie Trainspotting is delivered in Ewan McGregor’s recognizable brogue.

The visuals are just as kinetic, a rapid-fire barrage of images revealing a motley crew of dead-end kids doing a whole lot of nothing beyond chasing that next high in the streets of Edinburgh, Scotland.

Based on Irvine Welsh’s debut novel of the same name, Trainspotting the movie hit popular culture like a freight train upon release in February of 1996, even more so after reaching American movie screens that summer in July. Bestowed with critical acclaim and even prestigious awards (it was nominated for Best Adapted Screenplay at the 1997 Academy Awards), the movie’s cultural impact was far more profound.

The stylistic visuals and brilliantly curated soundtrack spoke directly to American and European youth eager for touchstones to call their own. While the soundtrack was made up primarily of proto-punk classics from Lou Reed and Iggy Pop, next to Britpop favorites like Pulp, Blur and Elastica, it was Underworld’s “Born Slippy .NUXX” that still stands as the film’s unofficial theme song. The track’s relentless beat and stream-of-consciousness lyrics encapsulated the sense of reckless abandon and determined nihilism coursing through the heart of Trainspotting.

The decidedly dark comedy is often hilarious, but it never shies away from the harsh brutalities associated with hardcore addiction among working-class youth. The film’s premise of finding meaning in a life outside of the traditional mainstream pursuits paints a bleak picture, all leading back to the numbing comforts of a heroin needle.

Underneath the thick veneer of decadence and anarchy, what truly powers the film are the stellar performances from the exceptional cast, which found Ewan McGregor working alongside Jonny Lee Miller, an unhinged Robert Carlyle, and Kelly McDonald in her big-screen debut. Their collective interpretation of screenwriter John Hodge’s outstanding script resulted in a movie that still stands the test of time, particularly considering the current rise in opioid abuse across America.

“That Thatcher era was being swept away in a tide of increasingly ludicrous sex stories, financial misdoings, and football managers getting done for bungs in service stations,” director Danny Boyle told The Guardian in 2008, recalling the film’s mid-‘90s significance. “I always believe that popular culture will eventually say, ‘Fuck this,’ and create an energy to sweep it away. We got it in house music, Britpop, and you could sense it in the commercial success that greeted something as non-mainstream as Trainspotting.”

As American youth culture was looking for the next big thing in the post-grunge era following the death of Nirvana’s Kurt Cobain, Trainspotting was part of the mid-‘90s paradigm shift toward something entirely different: rave culture. Just one year later, UK rave pioneers the Prodigy would top the US Billboard album charts with their album Fat of the Land.

After initially exploding on the coasts, underground parties had spread across the Midwest, where many saw themselves in the disaffected characters in the movie. After experiencing the highs of PLUR, the idea of letting it all go to follow their parents’ footsteps into a traditional lifestyle seemed like the kiss of death. Akin to the leads in the film, they had the same overarching question: now what? 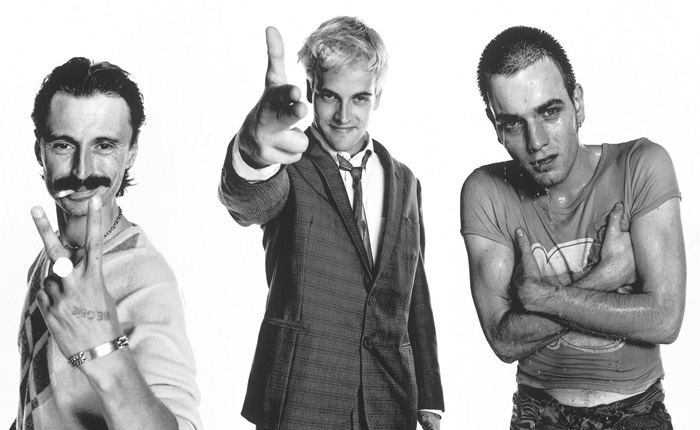 It’s the question that many of the movie’s original fans hope to have answered with the impending release of T2: Trainspotting. It’s a sequel that reunites the original cast, director and screenwriter John Hodge to reveal where the characters are now, 20 years later.

“People who came to see the original film when they were in their early twenties are very different people now. And the way John Hodge has put this thing down, obviously with the help of Danny Boyle, is to make it about how the characters’ lives have moved on… or have they?” explained actor Robert Carlyle in an interview with NME last year. “Without giving anything away, maybe some of them haven’t really moved on. That’s what the audience is going to have to go through with them. I tell you, this film is going to be quite emotional for people. Because the film sort of tells you to think about yourself. You are going to be thinking: ‘Fuck. What have I done with my life?’”