As Dragan Roganovic (aka Dirty South) was listening to his forthcoming album, With You, he realized the songs were missing something: a visual to go with the music. So the Serbian-Australian DJ, who has recently been exploring the art of moviemaking, decided to create a short film.

The film With You premiered on iTunes and is doing well in multiple countries. Throughout the day of the debut, he posted on his social channels about the dream that was the film’s release and instant success. That night, he screened it at Sonos Studios in Los Angeles and revealed that what really mattered to him wasn’t the sales numbers, but the positive feedback from fans and critics. And this is no passing fancy. Dirty South plans to continue in this space until he can firmly establish himself as a director in the film word.

“I saw Al Pacino the other day at CAA, and I freaked out. I just drooled and walked past.”

At what point did you know you wanted to do this film?
I finished my album—well, I thought I finished it. I did 10 tracks and then recorded it. I listened to them in the order I thought would be the order, and I thought, “This sounds like a soundtrack to a love story.” Secretly, I’ve been falling in love with cinema for the last 12 months anyway. I picked up a camera about a year ago and started learning all about film—what makes people tick, the tech side, the scripting, directing, all that kind of stuff. The nerd stuff—I love all that. 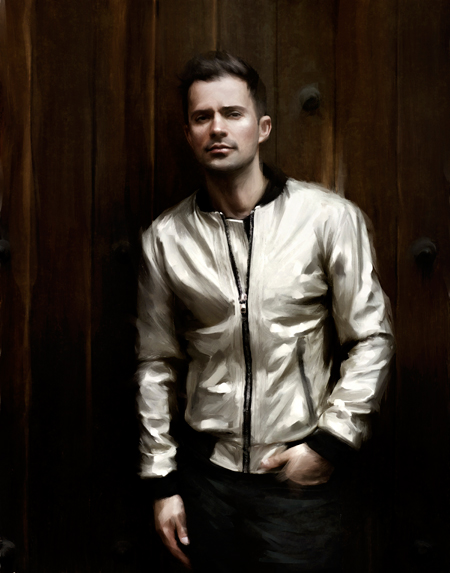 What are the best-made movies, to you?
It’s impossible for me; there are so many movies. I’ll watch the same movie over and over and get a different feeling. The last movie I rewatched was Fight Club, which is insanely good. But then I love Lord of the Rings because it’s such a sit-back-and-enjoy-the-journey type of movie. Every movie is different. If you look at The Godfather, it’s very well made and very beautiful looking. Every movie is different; you have Fight Club, which is twisted and very well made as well. Inception, too. I love films that mess with the mind.

Are there specific films that inspired With You?
I wouldn’t say there’s one movie—I think just a collection of things I love. Like I said, I love things that mess with the mind a little bit. There is a bit of a mind-bending feel to the movie. I think those things are very interesting. Even though it’s a love story, it’s a fantasy love story. What inspired it was when I listened to those 10 tracks. I thought this sounded like a soundtrack to a movie… I said, “I have to do something.” So this was my starting point to make a short film, and then I put a team together. As I was putting the script together I saw gaps, and I made new tracks for the gaps in the movie. So now the album has 12 tracks.

I talk with musicians who score films all the time, and they say they are writing to fit the director’s vision. But in this instance, you are your director; so you are writing to fit your vision but still have to write songs to fit the film.
That’s what happened—write the album, fit the story to the album—but then it was like, “Oh wait, now I have the story, I need two tracks to fit the story.” For me that was super fun, being on both edges of the world, trying to fulfill each way, because each one is a different way of working. So that was kind of fun, and it was crazy too. It was intense. I didn’t sleep for months and had a baby in the middle of all that. He’s seven months old, so he’s pretty much as old as the movie, or as the project is. The whole thing took about seven months, the album plus the movie. So it was very tense. My wife was like, “Where the fuck have you been?” It was intense, man.

Will you be touring now? Because I know that is always stressful for new parents.
It’s a catch-22. It’s part of the job, and I do love it; and then when you have a child they suck you in, and you are torn between two worlds. But you still gotta go out there and spread the word about the music and about the movie. It is my job, I am getting paid, so I have to go out and make money. That’s how you have to think about it. It’s fun, and it’s awesome. It’s also a job. So the kid will understand; eventually, he’ll understand why daddy is gone so much.

What were the turning points for the album and movie—the place where the two projects took shape?
I’ve been making electronic music for a while… I didn’t realize I was making this kind of music for cinema, but I was. And the sound was a bit of a departure from what I’ve been doing before, musically. So I was having these chats to myself about what I’m doing, questioning myself and so on, and speaking to people I work with about how I want to do different things. Eventually, after having laid down six or seven ideas that I really loved, I started seeing the album take shape. I started hearing what it was sounding like. At that point I was like, “Wow, now I see the sound.” When I finished the 10 tracks, that was another kind of awakening. I was like, “Wow, hang on, this is a soundtrack.”

Who are three or four directors you’d like to work with?
If Stanley [Kubrick] was around, he’s pretty awesome. Scorsese is really great; you can’t say anything bad about him. I love Tarantino’s movies. I also like people like Christopher Nolan and Nicolas Winding Refn, who made some cool movies before Drive.

Who is in your dream cast?
That’s a tough one. There are so many good people out there. I see someone like Theo Rossi, someone pretty dark with a dark soul, would be great for this lead. I actually saw Al Pacino the other day at CAA, and I freaked out. I just drooled and walked past.

Do you introduce yourself now as a director or a musician?
I’m so fresh into the movie world, I don’t think it’s the first thing I’d say, but I would definitely mention it. It depends on what you’re talking about. I think because I have a lot more experience in music, that comes first. I would just feel legit if I had another two or three projects under my belt; then I could maybe say, “I’m a director.”

No Future: Why 'Trainspotting' Still Matters