This time last year, Thomas Desbouvrie (aka Thomas Dirtyphonics) was living the dance music dream. His group, French bass masters Dirtyphonics, had a well received album—Irreverence, out on Steve Aoki’s Dim Mak label—an extensive global tour supporting said album, and the luxury of flinging expensive gear into a frenzied audience. This is in addition to marking fans’ body parts with his “I Am Dirty” stamp or walking across the hands of the clamoring crowds that attended his shows.

“I want to learn new things until I’m dead.”

At the same time, Desbouvrie was rarely seen without a camera—observing, capturing moments, and generally staying quiet during interviews while his cohorts talked over each other. Throughout it all, he was immersed in his art. From his early days as a graffiti writer (Maze) and his time at prestigious French art schools, to numerous exhibitions and design work for high-profile clients, it was always Desbouvrie’s true pursuit. 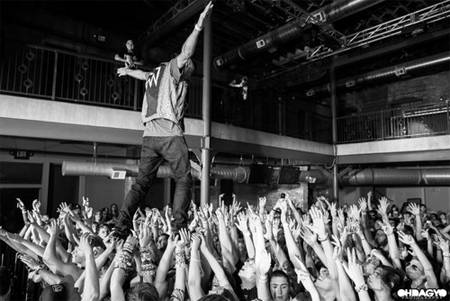 Then, in January of 2014, after 10 years of hard work in music, Desbouvrie left Dirtyphonics with a heartfelt missive on both his and the group’s social networks and took on the full-time guise of his artist alter ego, Matheo de Bruvisso. Retiring to Lyon, away from the big-city crowds of Paris, Desbouvrie now spends his time splattered in paint and buried in Photoshop, and he’s never been happier. This is the first time he has fully given his life over to art—even if the question “What is art?” is constantly hovering over his every move.

You have dramatically switched direction in your pursuits a number of times. What is the main motivation for these switches?

I was always doing art, even when I had a job. I have made the mistake of thinking creativity was enough for me to be happy, so I studied design for five years. I’ve been a graphic designer, a product designer, a sound designer—and made good money out of it. It was creative but not art. Brands were using my creativity to sell more of their product. That’s the only point for a company: making money. When you do art, making money is never the purpose. For artists, making their art is the first condition of survival.

There are various mediums for your art, including graffiti, which you don’t really pursue anymore.

In the ’90s, graffiti was a really underground thing in France. The colors and shapes in graffiti were so strong and fascinating. I dove into it and began spraying. I was totally into it in the beginning because I was discovering something new to me, but I was less and less convinced by the meaning of it. At first I thought it was all about freedom, but the truth is, it is ruled by norms and inner laws. If you wanted to be considered a “writer,” what you do must look like graffiti, which means respecting certain shapes and styles. And you had to paint on trains and listen to hip-hop. I used to do it and loved it, but graffiti isn’t a big thing in my life anymore. 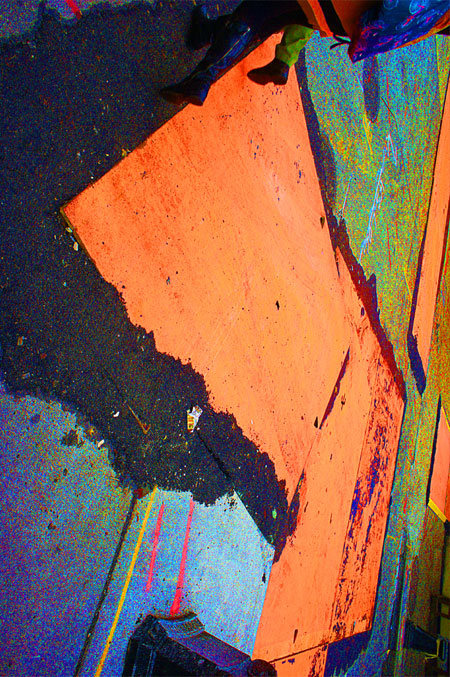 Abstract photography is a new venture for you. What’s the concept behind it?

I love walking. I look at everything: the floor, walls, sky, people, shops, everything. What I see is shapes, colors, compositions, expressions. For years, I’ve been taking pictures, but I was never happy with the result. Recently when I was working on one of these photos, I decided to exaggerate what I saw; so I pushed the colors, saturated them to the max. The shapes and composition started to appear in a new way, easier to catch, easier for everyone to see.

At the same time, I’ve been doing abstract paintings for years, and it changed my perception during my walks. I was starting to paint with my camera. The saturation was the missing link between photography and painting. The goal is to make the photographs look like paintings. I love playing with limits; that’s why I often cut the subject and leave only a small part of it. But at the same time, I leave some elements so people can make their way back to the original image in reverse—from abstraction to figuration. For example, in this photo, the people walking are a key to go back to reality.

Do you find yourself taking pictures of certain things more than others?
Floors, walls, homeless people, old people, illness, madness—because I feel close to them. They are my brothers of solitude. Even though I have many friends and a lovely family, I have always felt really lonely. I needed time to understand being different isn’t bad and can be my strength. 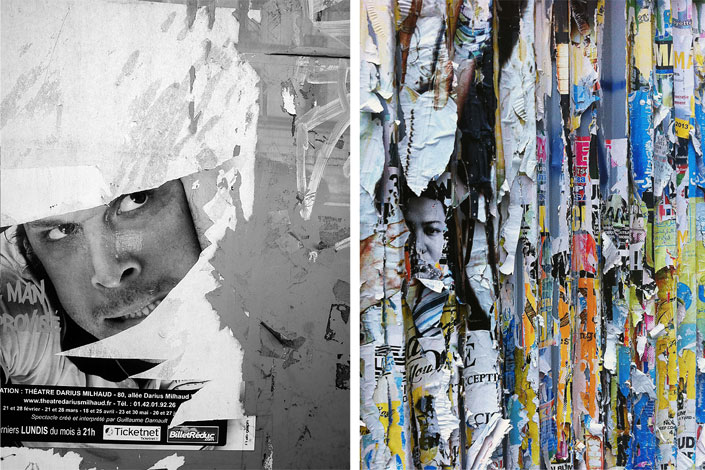 When you’re painting from a photo you took, are you trying to bring out intangible things you felt and saw when you took it that the photo alone may not be able to convey?
It depends, but yes—most of the time. Here’s an example of photo to painting. The yellow thing is the representation of something invisible, and it changes all the meaning of the original photo. 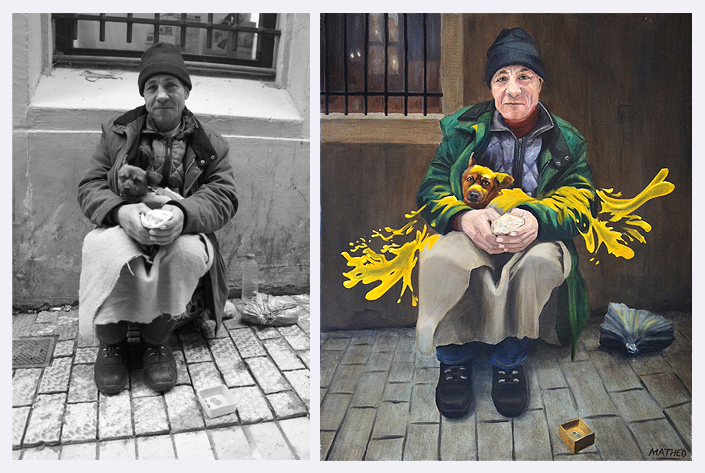 Here is another example where they are not books anymore—just lines that could be any kind of data, like records or lines of light. Only the feeling remains. 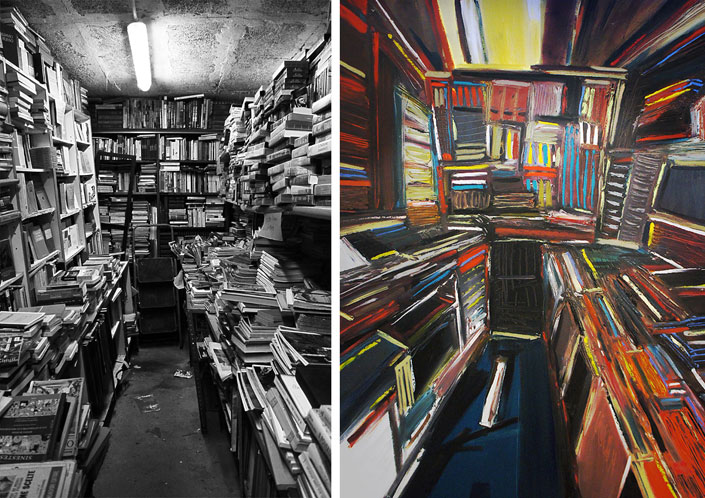 What’s the story with the words on some of your paintings?
I’ve always loved writing poetry, and it was natural to write on my paintings. I saw that in Basquiat’s work, and I just did the same.

You are meshing two of your mediums together, like with abstract photography.
You are right, because sometimes two words together can be stronger than painting the meaning of those words. Writing the word “banana” is totally different than painting a banana. Basquiat has been a big influence on me. When I discovered his work for the first time, I felt a huge sensation of freedom, like, “Okay! I can do whatever I want!” Some of my paintings are still inspired by his work. When I really let myself go, it often ends with something similar to his work.

Can you not always let yourself go?
Not really. When I paint figurative things, and even when I paint abstract things, it’s hard to cut your thoughts and let your instincts speak alone. It’s like a trance. Sometimes you can’t go into it.

You are back to taking art classes. Why?
I hate school, but I take classical painting classes because I want to know every technique so I can win degrees of liberty, multiply the possibilities, and push boundaries. I want to learn new things until I’m dead.

You are still making music. What’s your intention with it?
I started two new projects: one electro/hard-rock and one techno. Both are duos. The intention is having fun and sharing a good time with friends. I just like doing it. I’m thinking more about making arty music—meaning experimental music free from the common meaning of “good” music, with no other intention than expressing the moment, no intention of making people dance or have any other kind of good time. I feel like the difference between art and not-art is the intention. Every common creation is made with the intention of making something evolve. Art has the intention of expressing the will to make something remain forever: a feeling, an emotion that you want to catch to make eternal, which is the exact opposite.

For example, when a designer designs, when a cook cooks, there is the will of changing the present into something else. Artists change the future by showing the present, by catching something forever. Art in the form of music will be the noisy form of an emotion, a feeling, a moment in history. A great photo will catch something that will never happen again or is at a special disposition at that moment when the picture is taken. A painting will try and show the invisible of something already existing. As Nietzsche said, “The essence of all beautiful art, all great art, is gratitude,” which means that artists are the ones who capture their love for something that is here already, while other creatives are changing what they don’t love to make it better. That would sum up my theory of art—which I think a lot of people won’t agree with.

Why do you think people would disagree?
Because it puts a big limit between what is art and what is not. It explains why I don’t consider dance music as art: because it’s essentially made by thinking about how people will react on a dancefloor. There is still a part of it that can be considered art, if we look at it like the expression of the feeling you have while producing it, but the main goal is to make people dance. Noisia, for example—when you see the way they produce music, there is evidence that first of all, they are expressing their love for certain sounds and breaks, way more than how to make people dance. They are playing their own game, not the dancefloor game. They are artists, in my opinion.

Why do you have such a need to define what art is?
I’m very interested in philosophy and contemporary art, but I’m not satisfied with the theories that I read. I love to understand things, and art is maybe one of the most difficult things to define. And I want to understand why art is so big in my life. Why do I spend all my energy on it? And I want to kill a big part of contemporary art. I want to discredit the profiteers and scam artists who are only there to get rich and famous. I have nothing against artists who get rich; I have something against rich people who pretend to be artists to make even more profit. If there are people who like what those artists are offering, it doesn’t make them better artists. It goes back to the previous theory: If the point of what you do is to be liked, then you are thinking about the reaction of others. You are not focusing on the true subject of your piece of art. Art that is made to be liked is like music that is made to make people dance. That’s cool, but that’s not art to me anymore.

Thomas Desbouvrie, aka Matheo de Bruvisso, created a custom desktop image just for you. Download it for free.

Dirtyphonics Breaks All the Rules on 'Night Ride'

10 DJs You Should Be Following on Snapchat