It’s Danny Howard’s first time touring North America, and the couple of days he has in Los Angeles are drenched in uncharacteristic rain. The Northern England-bred 27-year-old is used to wet weather and early-in-the-day darkness, but he quickly realizes that Angelinos are thrown by both these factors. That’s not stopping the smiley and outgoing Howard, who, rather than downing an expected cocktail in the uber modern lobby of his Hollywood hotel, is instead asking for hot chocolate. 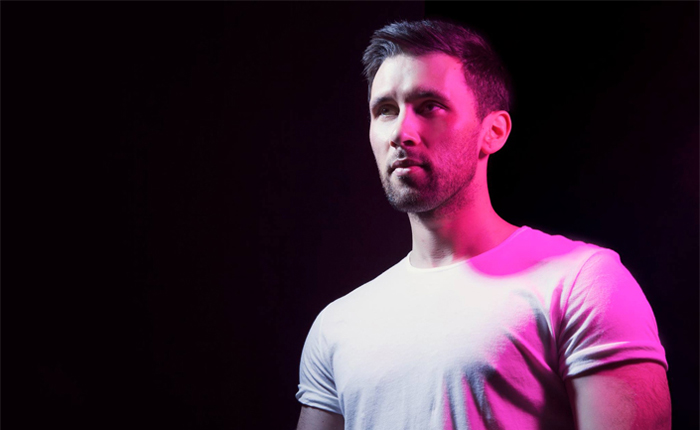 Howard had once expected to pursue a career in sport and exercise science, which he got his degree in. However, he ended up on a different path after winning a BBC Radio 1 DJ competition in 2011; he hosts the station’s weekly Dance Anthems show every Saturday from 4–7pm GMT. He also helms the one-hour show Nothing Else Matters on Sirius XM’s BPM channel, airing Saturdays at 8pm, Sundays at midnight, and Wednesdays at 11pm.

Nothing Else Matters (but the Music) is Howard’s all-encompassing brand, which lends itself to releases, club nights, tours, the radio show, and any number of other endeavors. It was inspired by a four-hour Erick Morillo set at the Syndicate, a superclub in Howard’s hometown of Blackpool, where he never left the dancefloor. Once outside, the thing that stuck with him was: Nothing else mattered but the music.

Prior to Radio 1, Howard had a run as the resident at the Syndicate. He also was resident at Ministry of Sound in Hurghada, Egypt—a short-lived stint, as the revolution happened soon after. The attendance at the club dwindled to nothing—a major disappointment for Howard, who was looking forward to “Scandinavian Season” and the flocks of Swedish girls it brings to the resort town.

More recently, Howard mixed Ministry of Sound’s double disc BBC Radio 1’s Dance Anthems Ibiza. He keeps the mixes fresh with his monthly podcast, available for free download, as well as on one of British Airways’ audio channels. Not just about the mixes, Howard is signed to Spinnin’ Records. This year alone, his two collaborative tracks with Futuristic Polar Bears, “Romani” and “Vargo,” are irresistible slices of progressive house that void Howard’s assertion that he has “absolutely no idea” what he’s doing in the studio.

Even with this many demands on Howard’s time—as well as penning a monthly “Nothing Else Matters” column for DJ Mag—he still finds time to stay fit. He gets to the gym wherever he can find one and runs whenever he can, including completing a 10K after a very late night/early morning of DJing.

The BBC Radio 1 competition in 2011 that kicked off your career—what exactly were you competing for?
The prize was to play at Radio 1’s opening party in Ibiza at Ushuaïa… It was the opening slot, of course, but the queues are so big before the event even opens, it quickly fills up. After my set, the bosses at Radio 1 asked if I wanted to play the next party, which was that night at Space.

What does the competition entail?
I submitted a three-minute video, a half-hour mix, and a profile. Hundreds of people enter. Radio 1 picks six people to go to the studios in London for a week of tasks. There’s a mix challenge and hype-the-mic challenge voted on by the public. There’s a remix challenge, which was to remix Calvin Harris’ “Feel so Close”—only a minute, but you have a day to do it, two people on each team. Calvin Harris judged the remixes. The final two left, we went from being teammates to opposition. You have to do a five-minute on-the-air mix on the Breakfast Show, which is 8 million people listening, again voted on by the public. 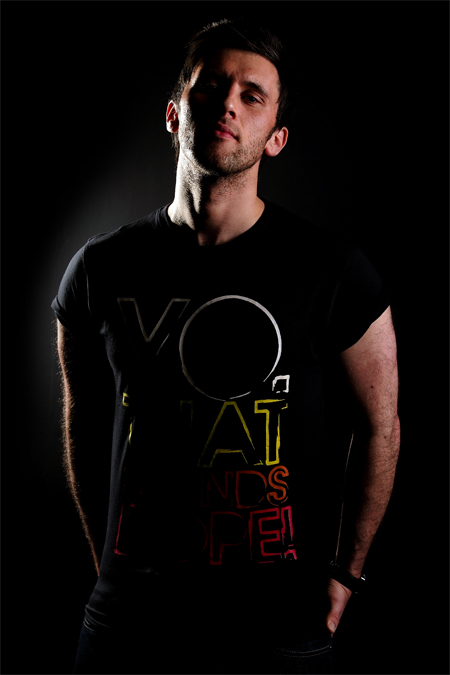 You weren’t expected to go past that one set at Ushuaïa in Ibiza, were you?
Nobody was expecting to go past that. Sam Bailey, who produced Pete Tong’s and produces Annie Mac’s show on Radio 1, said I should submit a demo. I did a demo of an hour-long radio show, selecting songs and talking in between. I got a one-off show at Christmas of that year. In January, I did a week of pilots and demos. They offered me a permanent show, Dance Anthems, which started in April 2012.

The name of the show is self-explanatory, but what do you present with Dance Anthems?
Radio 1 has positioned me to represent dance music on a mainstream level. The show is Radio 1’s shop window into the other amazing dance shows we have. Someone who is a casual listener needs to enjoy the show, but also, someone who is really into dance music has to enjoy it as well, which sometimes is quite hard to balance. My show is very accessible right through to the finer section of more underground. Four o’clock, you’ll get the more commercial, mainstream end. From six o’clock, for the last hour, it goes newer, more underground, deeper, less vocals. It’s about familiarity with education.

The three hours of Dance Anthems has specific portions. You play a bunch of remixes of the same track.
That’s Push Tempo, where we get all the remixes of a track, start slow and progress as the remixes get faster and faster, pushing the tempo.

You have the R1 Dance Chart. Do you determine who is on that chart, or is it done by Radio 1?
It’s a collaborative effort. The R1 Dance Chart lives on my show because it’s early in the day; compared to the other dance music shows, it has a bigger audience. We look at all the different dance shows from the week before, see which songs are popping up the most and getting the most love. We compile that into a top five, which is agreed upon between me, Sam Bailey and Nigel Harding, who are the music policy executives at Radio 1. People look at Shazam, people look at buzz charts, people look at blogs. We’ve got some of the best tastemakers in the world on our network; this is what we think. It’s never too far away from what everyone else is thinking, but we want to put our own stamp onto it. It’s a very unbiased, truthful look into what is going to be big.

“There are a lot of producers who are not great DJs, and they probably know that if they’re being honest with themselves. At the end of the day, do the people in the crowd care?”

Dance Anthems also has a back-to-back portion.
That’s where I go into the mix with a different DJ every week. The DJs are mainly my choice, which is a great luxury to have. I can pick my favorite artists, but I’m always mindful of the listener. That’s the number-one rule. Will the people listening to the show enjoy it? But it’s important to mix it up as well. One week I’ll have somebody who plays more electro, one week I’ll have somebody who is deeper.

You are very flexible with the styles represented on Dance Anthems.
Every single song that the DJ plays isn’t always what they want to play. It’s a balance. Me personally, in the clubs, it’s about house music. I try to reflect what I do with DJ sets on my radio show. If you have to go left or right to feed the crowd what you want, then you’ve got to do that. I’m not trying to be lots of different things. I’m trying to be a DJ that everyone can enjoy.

Your weekly show on Sirius isn’t very different from what you’re playing on Dance Anthems. You’re clearly not trying to Americanize what you do.
The agreement is, the show is going to be a snapshot into the UK club scene. I always start with what was my number-one tune from the previous week, then three big-room tunes, then it gets deeper and deeper. Halfway through the show, there’s a 15-minute deep mix. That always gets a big reaction. It’s the section of the show that people comment most about to me, and that’s what has told me deep house is getting bigger and bigger in America.

Is what you choose for British Airways flights more restrictive?
That’s my podcast. The podcast gives me more freedom. It’s more me being selfish with it. British Airways have never given me any direction with it. Carl Cox has his radio show on there, so he’s not going to change what he does to suit a British Airways customer. Why should you change what you do just because it’s on a flight? Passengers can choose to listen to it, and if they don’t like it, they can choose something else.

Most of your DJ sets are recallable, either on the BBC iPlayer, iTunes or Sirius. They have more longevity, so in a way, you have to be more conscious of what you’re playing.
When you’re doing the radio or podcast, you’re aware that a lot of people might listen, so you have to make it appeal to as many people as possible. It’s more of a personal thing in a club with the crowd. I play more housey and recognizable stuff every other song. Also, in a club, you never know what direction you’re going to go in. That’s what makes it unique.

How have the audiences been responding on your first tour of North America?
I was a little worried, because I knew what I wanted to do—play house, but for a big room—not so much EDM, but a groovier sound. This is no disrespect to other DJs, but I didn’t want to come here and play the same as what everyone else is playing. I want the promoter and the crowd to go, “Okay, we didn’t know all of the tunes, we knew some, and we don’t always listen to this sound; but it was good, and great atmosphere.” So far it’s been working.

You are a rare commodity these days as a DJ who came up through DJing rather than producing. It feels like that has made you a more intuitive DJ.
I’ve done my fair share of gigs in empty rooms in the early days. It teaches you how to work through a set properly, rather than playing all your big tunes at the start to get something going. DJs work for years and years and years to get to where they are. Now you can have one big tune and bang, you’re in front of 10,000 people—which is fine, but there are a lot of producers who are not great DJs, and they probably know that if they’re being honest with themselves. At the end of the day, do the people in the crowd care? They’re there to hear the music.

You are also actively maintaining your fitness level, which is near impossible with a DJ schedule.
More and more DJs are realizing that if you don’t look after yourself, you will suffer physically. It’s about eating well and not drinking alcohol all the time, definitely not doing drugs. Especially now, a DJ is so busy, it’s impossible to maintain any good level of health whilst touring so much. Through the radio, I’m interviewing a lot of DJs and producers. I’m finding the younger generation has a very different approach to DJing. DJing used to be about partying, getting on the same level as the crowd—which is still the case in some respects, but in different ways now. It’s very much focused as work, as opposed to just having fun. Even though that’s what DJing should be about, to maintain it, you have to have that approach. Young producers never experienced what a DJ would in the ‘90s and early ‘00s, which is not a bad thing.