We asked Ned (of Sultan + Shepard fame) to share a childhood memory about Halloween. Here’s his story. 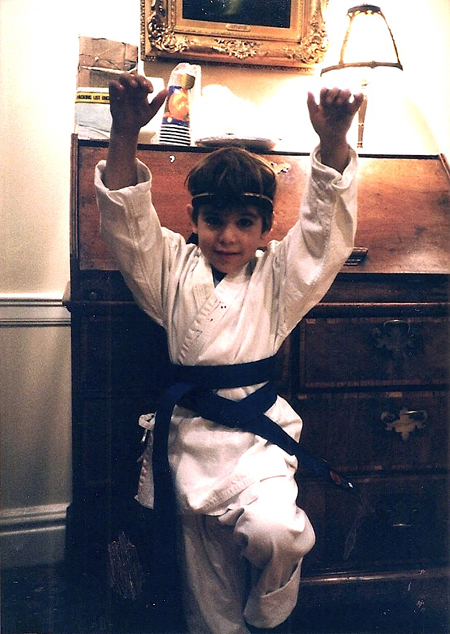 When I was four, I was completely obsessed with The Karate Kid. I’m not sure what a four-year-old really thinks about karate, but I was totally fascinated with the idea that Mr. Miyagi could impart all of his knowledge to this unassuming, average American kid. I really liked the idea that karate would help protect you against bullies.

The bullying part of the movie felt very real to me as a kid, and I loved the idea that Mr. Miyagi and his hardcore training could put a stop to that. The part that was especially memorable was the infamous crane kick at the end of the movie. All of my friends and I would relentlessly practice the crane kick after we saw the movie, convinced we had figured it out.

When it came time to dress up for Halloween at that age, there was no doubt what I was going to be. I spent the whole night running up and down the stairs of the apartment building where I lived, threatening to use the crane kick on my neighbors who didn’t give me the candy that I wanted.

At the end of the night, unsatisfied with being unable to use my crane kick and jacked up on large amounts of sugar, my best friend and I decided to practice our crane kicks on each other. I ended up knocking out one of his teeth by accident. He got pretty upset, and I felt really bad that I had hurt him; so I gave him half my candy, and we were cool.

You can catch Sultan + Shepard at Escape Psycho Circus on Saturday, October 31.