James Hazell, better known as FuntCase, has the jumpy, fidgety energy of a teenager. A good decade past that age, Hazell transfers that irrepressible liveliness to his surroundings. Right now, he is ensconced in his hotel room a few hours before his gig in Vancouver at Red Room. Hazell is nursing a persistent cough and sniffle, hacking into his hand often. This causes cringing worry for the germ transference to his tour mates: Ed Rush and Optical, as well as the Upbeats, with whom he is traversing North America as part of the former’s Virus No Cure LP tour.

“If you expect something from me and I deliver, I feel like I’ve failed.”

On the road with drum & bass legends and stalwarts, Hazell, who is known for his FuntCase dubstep skills, seems like an odd choice, except that he is playing an all drum & bass set for this tour. This is not as far a cry for Hazell as it may seem, considering he got his musical start in drum & bass. “Someone the kids will recognize,” offers Optical, acknowledging Hazell’s currency with the present generation.

Hazell is very current, and with his #DPMO cap, he looks like a comic book character. He speaks about FuntCase—which he came up with by switching the “F” and the “C”—in third person, like it’s a persona entirely removed from himself. But he speaks of his seaside hometown, Bournemouth, UK, and his attachment to his friends and family there with emotion, citing that connection as the main deterrent to his moving to Los Angeles, something he is taking under consideration. “My mum isn’t there,” he says simply. “I’d feel like I’d be removing a massive part of my life from my heart leaving Bournemouth. I’d feel empty.”

“Empty” is not a word used at any of the No Cure stops. In fact, it’s standing room only on the almost month-long crisscross of clubs and festivals presented by Bassrush.

You originally started out making drum & bass, as DJ Dose. Why and how did the transition to FuntCase and dubstep happen?
I was DJ Dose from when I was a teenager, for six or seven years. The thing was, I wasn’t that good; I know that now. Back then I was thinking, surely I must be getting somewhere, it’s been so long; but it takes as long as it needs to. I was teaching myself. I was making a little bit of headway around 2008 with tracks of mine coming on Radio 1Xtra. But even though DJ Dose was known, my tracks never really got attention.

At that time, dubpstep was still very deep and not very energetic. With FuntCase, I brought my whole drum & bass sound to dubstep, and it went boom. It happened so quickly, I had to abandon drum & bass and just go with what was happening. I’ve killed off DJ Dose now. I do all my drum & bass under FuntCase.

You had some music released as Haze as well, didn’t you?
Haze was never a serious thing. It was two, three years into FuntCase, and I could have put those tracks out as FuntCase, but I wanted to make them for fun and just put them out there. I didn’t feel it would have fitted properly with FuntCase. You need to know what you’re going to get when you listen to an artist. You listen to a FuntCase track and you know it’s going to be dubstep, and Haze is going to be deeper or more experimental. Let’s say someone had never heard of FuntCase and they typed in “FuntCase” in YouTube, and a Haze-style track came up. They’d go, “I don’t like this,” when they could be an angry, loud dubstep fan and be into FuntCase. If that situation happened, I might be missing out on a lot of opportunities. Haze can be the experimental guy, but not serious, so I could do it whenever I wanted.

“Everyone thinks I’m on drugs; that’s how crazy FuntCase is. But I’ve never touched a drug in my life, and I’m probably the least angry person you’ll ever meet.”

Why did you agree to play strictly drum & bass as part of the Virus No Cure LP tour?
I’ve been generating a bit of hype in drum & bass because of a few tracks I made, which some bigger artists are playing. I’ve been talking about drum & bass a lot over social media and been getting known for it. I always play it in my FuntCase sets. This tour popped up, and my agent threw me in the pot. Ed Rush and Optical said yeah. I’m pretty happy. It’s nice to have a month off dubstep. 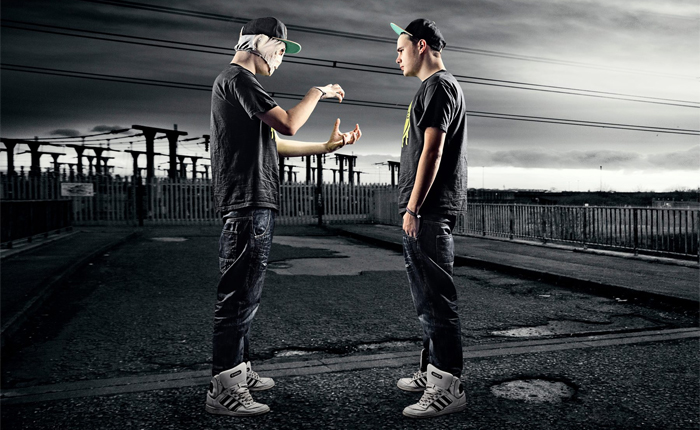 Would you want to phase back into drum & bass, if it could happen organically?
I’d probably have to stick to dubstep. It’s my main sound, and it’s a lot more feasible for me, production-wise. Drum & bass is so hard to make. I wouldn’t be able to keep up making track after track like drum & bass artists do. For my own sake, I’m going to stick to dubstep.

What style of drum & bass do you play when you DJ?
I play a whole range of stuff. I start off dancefloor, then I work into a darker, Noisia-esque/Ed Rush and Optical angry, driving style; then I go into a jump-up section and classic jungle. It’s all the drum & bass I love. It’s not what people expect me to play. If you expect something from me and I deliver, I feel like I’ve failed.

Do you play tracks off Ed Rush and Optical’s No Cure LP?
No, they wouldn’t allow it, I’m sure. It’s DJ code: You don’t play other DJs’ stuff before them, same as you don’t go with your best friend’s ex-girlfriend. It’s all unwritten code.

There’s a significant musical generational gap between you and them.
That’s part of the reason I’m on the tour. It brings their crowd and my crowd together, educates both sides, which is good.

What’s the story with the mask you wear while DJing? It’s part of a Dr. Who costume?
There’s a night in my hometown [previously called] Dubnium, which is now called Dub Optic. They had their own section in this festival, Summer Ball, and I was doing graffiti spraying, which I’d been doing for four or five years before that. I was wearing the whole suit, which the mask came with. This would have been the very start of Funtcase, in 2009. It’s a child’s costume. I bought it in a supermarket originally. My first one got stolen, so I had to go on eBay to find the same one. I found it, but I can’t seem to find any more.

I’m trying to custom-make my own one now, but it’s taking a long time to perfect it. I’m getting a movie studio to make it—the same studio that did James Bond and Iron Man, they’re designing it. It’s in the prototype stages. I gave them my mask for sizing, and we gave them a design that was done a while ago from some other artist, but it needs to be tweaked. You probably won’t see it this year.

The mask is a good way to separate your public from your private persona. That’s a valuable thing these days, when you have to be so active in social media to keep connected to your audience, to the point where you’re living your whole life in public.
It’s like a shield; I feel naked without it. The FuntCase act I put onstage is extremely the opposite of who I am as a person. FuntCase is angry; he’s stupidly energetic, beats his chest, and does all this crazy stuff. Everyone thinks I’m on drugs—that’s how crazy FuntCase is. But I’ve never touched a drug in my life, and I’m probably the least angry person you’ll ever meet. It’s turned into a weird outlet because it’s not me, but it’s what I’ve become as an artist.

Do you wear the mask once you’re offstage but still at the event?
If I know there’s people waiting right after I finish playing, I will leave the mask on and have a few pictures. Or if people say, can we have a photo with the mask on, sure. Most of the time I take the mask off, because it smells and it’s sweaty. Better to have it off.

You have had tons of remixes but no original tracks in a couple of years. When will some original FuntCase material be coming?
Dubstep got very formulaic and very boring, and I was being influenced by everything that was being made at the time, which was all the same. I got massively disheartened with the whole thing and basically spent my whole time concentrating on making myself better as a producer. I was listening to tracks from bigger artists, and how they sounded was so amazing and so professional. I’d listen to mine and be like, “Ehh, can’t really leave it at this quality.” I worked and worked on learning how to make my sound better. Joker’s been teaching me a lot about what to do in tracks. I’ve honed it and honed it and came out with a drum & bass remix for Circus, which was the first thing I’d released in a while with my new skill. I wanted that to be a showcase of where I’d gone. I’ve got about 12 original tracks I’m going to start bringing out now.

Are these tracks going to be an album?
This is just stuff on the side, quite a lot of collaborations. I started writing an album, and it’s been a long process. In about a year or two’s time, I’m only halfway through it.