Loco Dice restored faith in the electronic full-length album this year with the release of Underground Sound Suicide. Offering up 15 new cuts that are standouts in their own right, the German DJ/producer’s ability to meld hip-hop sensibilities with techno and house has an undeniable groove that’ll make you move.

“Once hip-hop, always hip-hop,” says Loco Dice. “You can’t just change yourself or be somebody else because you play different music or wear different clothes. Inside, you’re who you are, and that’s me, that’s hip-hop.”

A former hip-hop DJ and rapper, Loco Dice took a detour from hip-hop during a wave of new experiences and discoveries, but it was always in the background for him. When he crossed over into techno territory, he was met with some criticism. “In the beginning people would say, ‘Your technique is completely different from a techno or house DJ.’ Most of the techno DJs are very specific in how the mixing should be or how it all should be,” he says. “In the beginning, people were saying, ‘You’re not mixing on the one; you’re mixing weird.’”

But learning the ropes on the hip-hop tip ultimately benefitted Loco Dice and gave him an added edge. “Now these days, people recognize it more and more,” he says. “They know where it comes from and why my mixing is like that.

“In the last seven, eight, nine years, [hip-hop] was back in my life, and with this album, I was a little bit more secure with myself,” Loco Dice says. “In the beginning when I left hip-hop, I was insecure to use those elements because I thought the scene or the world that I’m entering, they don’t like it. Then I figured out over all these years that music is music; it doesn’t matter what it is. And here I am now and the album reflects who I am.”

Though the better part of his past 15 years has been dedicated to techno and house, one thing that’s never changed for Loco Dice is his affinity for music overall. “I love music, that’s why I’m doing it. Of course it’s a job as well, but it’s pure love. Sometimes you have the emotions and the feeling and the inspiration to tell a story and to pack it into an album. Then it’s time to release it and to produce it, and it happened with Underground Sound Suicide.”

Loco Dice says every album comes deep from his heart and is an amalgamation of his current emotions and experiences. He goes beyond the music to express what he’s feeling: “Underground Sound Suicide is a story. I wrote really amazing stories to each track, which will come out with the vinyl box.”

One story he did share regards the album title. “This word ‘underground’ was the term at the moment in our music scene,” he says. “People love to think in a box or give things certain stamps or genres, and this word just happened so often in my head. I know it sounds very provocative; it should not be taken so serious. It’s just a word and everybody can interpret it the way he wants.” 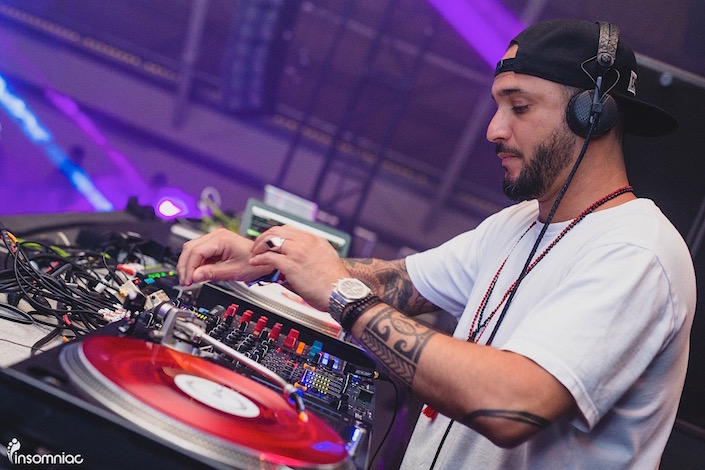 Don’t ask Loco Dice to single out a favorite cut from the album, though, as he’s attached to every one. “I love them all because they all were done deep with passion and love, but they’ve all been done in a certain moment where the time was right and all in one flow,” he says. “Just to pick one would be so unfair.” Even narrowing down the album to 15 tracks was a challenge—six additional tracks didn’t make the cut, though he loves those as well. “I hope one day I’m going to share them with the world!”

While many producers would sit back and relax after a successful album release and promotional touring, Loco Dice just can’t stop. “I’m in the studio again” he says. Working on an as-yet-to-be-revealed remix, he’s also excited to rework even more remix offers. “Besides that, I’m constantly working on tracks, so I might already have a plan for February, so watch out. There’s a lot of music coming out.” He says he feels more inspired and motivated than ever. “After an album, normally you’re really exhausted. You tour and promote it and everything. But the inspiration is great at the moment, and I feel very good at the moment. I just want to bring this positive energy I have right into the music.”