With EDC Las Vegas right around the corner, dance music’s movers and shakers are prepping for the fourth installment of the EDMbiz Conference & Expo, the industry’s premier business and networking event. (Don’t have your passes yet? Register here.) Held once again at the Cosmopolitan Las Vegas, EDMbiz features two days of progressive panels and keynote presentations, along with three nights of exclusive Insomniac nightclub events and pool parties.

“For those of us that were involved in the rave scene early on, we saw the tremendous potential of it. We didn’t dream of it getting to where it has gone; we felt like we were going against the system. How it’s become fully realized is unbelievable.”

In anticipation of next month’s event, we sat down with KCRW music director and conference host Jason Bentley to explore the unique role of EDMbiz within the electronic music sphere, and what exactly it is that makes this conference so special to attendees and executives alike. Want to take part in his reddit AMA? Tune in here at 3pm PT on Friday, May 15, to join in the conversation. 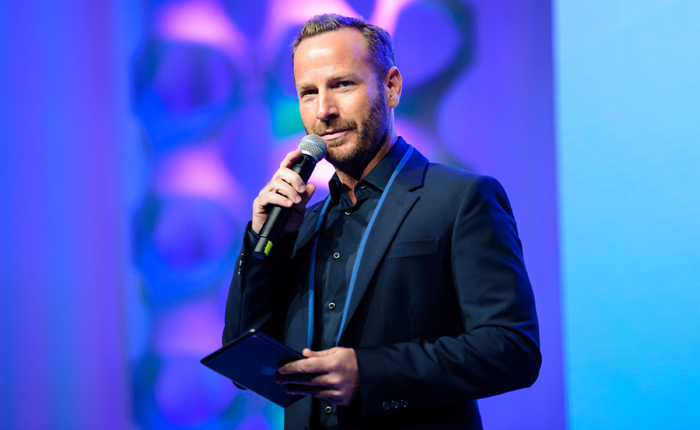 Where do you think dance music is right now, and why could 2015 be such a pivotal year for the genre?
I don’t know, but I think that’s why conferences are important [and] why community is important. Where it evolves, I’m certainly always interested in finding out. I don’t mean to be elusive, but I do think these things reveal themselves in realtime. I think there were a lot of hints and strong indicators last year on this supposed “bubble” and the aftereffects of this kind of consolidation binge. We anticipated a lot of things that have really come to pass.

I think the value of EDMbiz, first and foremost, is about unity and networking, and betting on new ideas, and understanding these challenges going forward. A lot of discussion last year was challenging the idea of EDM, and the usefulness of the terminology, and whether it can stand. We were already sensing some rejection from within—from the creative community itself—on whether that term could fly. And so I think these are all healthy debates, and this is ground zero for that conversation.

We obviously offer a lot of substance from our panels—whether you’re interested in hearing from agents and managers and brands, or investors and big club promoters. We’re seeing more underground-themed bookings and curations that are happening and that seems to be flying. I don’t know specific club nights, but one of the popular [Vegas] pool parties is going decidedly underground. And CRSSD Festival—you look at lineup versus attendees. They were young, sexy, happy, colorful—does that jive with straight-up underground vibes? Like, “Wow, this is cool. Hot girls are going for underground dance music?”

“The success of the festival is proof of the theory that people are very interested in all types of music. Electronic music is the perfect complement for this forward-thinking movement and mentality.”

Crossover is happening everywhere, and it started with the way we search for and digest music nowadays: playlists versus albums, portable versus static listening situations.
I think that’s the great promise of the festival. With this transformation to a festival experience, we’ve seen the best realization of the digital music revolution—whether it’s on an iPod, social networking, SoundCloud—the real breakdown of formats. Formatting is a means of control and commodification, but I think the digital music revolution has just broken it wide open, and the success of the festival is proof of the theory that people are very interested in all types of music. Electronic music, and the sampling and technology, is the perfect complement for this forward-thinking movement and mentality. So for young people, it just makes sense. They’re not approaching it like intellectuals; they just do what they do.

For those of us that were involved in the rave scene early on, we saw the tremendous potential of it. We didn’t dream of it getting to where it has gone; we felt like we were going against the system. How it’s become fully realized is unbelievable. There are so many new aspects of the experience. It’s just an amazing time to be involved in music world.

As the host of EDMbiz, what’s the feedback you’ve gotten from artists? The agents and managers are rarely at a loss for words, but it provides an interesting forum and format to DJs and producers.
I think often times, the artists don’t really have an opportunity to express their personalities; they’re kind of shielded behind this mythology of the artist, and the DJ and the DJ booth. I think they appreciate the opportunity to open up and talk to the audience and take questions from the audience. I interview all kinds of artists, and I think with other genres, like rock or folk, it’s much more about the artist telling their own story and expressing their own challenges, and using their art as a way for them to evolve and transform and grow. With electronic music and in an instrumental format, I don’t think there’s as much of an opportunity to tell your own story. I think events like EDMbiz create these important opportunities for artists to connect with their fans.

If you could construct a dream panel, what would it be?
I’m interested in the ever-evolving definition of a DJ, probably because I’m an old-school head who remembers playing vinyl and really excelling with those tools, and those tools are kind of a lost art at this point. Is the advent of EDM based on producers being put forward as DJs with a coordinated show? Was that the shift that caused EDM? Can a DJ in the old-school definition—purely a DJ—survive, or do you have to be producing? I’m also fascinated with the long lineage that goes back to disco and northern soul and Motown. I’m just interested in the history and context of where we are today. So, maybe a dream panel would be representatives from different eras before they expired.

What’s your favorite thing about the conference?
It’s the quality of the discourse. Seeing old friends and meeting new ones. It’s the excitement of heading into EDC, and the activity of Vegas that week. I think my favorite part is just seeing the genre being presented in such a respectable, organized and classy way. The facilities are great, and the experience is great. I appreciate those details, especially when I feel like the music and culture is in good hands.