Standing in one of the countless rooms in his multi-storied home, Dave Thomas casually and humbly pulls out a large manila envelope postmarked “Buckingham Palace.” It contains a letter to Thomas from the Prince of Wales’ office and a foreword written by Prince Charles himself to be included in Thomas’ book, Vanity Project, projected to be published in 2016. This is one of many jaw-dropping items—scattered across desktops, pinned on walls, and propped against chair legs—that will be included in the 300-page book chronicling his career as a fashion stylist.

“Fashion isn’t for everybody, but I believe everybody has equal potential.”

Thomas started as a plumber in his native Gloucester in the southwest of England. Miserable, and with his eye on the glamour of London, he ran away to the big city. From there, he went to another big city, New York, where his unique British style caught the eye of clients at the hair salon where he swept floors. They asked him to style them for a gig; it was the first time he’d heard the term “stylist.” Returning to the UK, Thomas received a grant to pursue styling from the Prince’s Trust and moved back to London. He worked two jobs while learning the ropes, assisting other stylists, and eventually styling on his own. 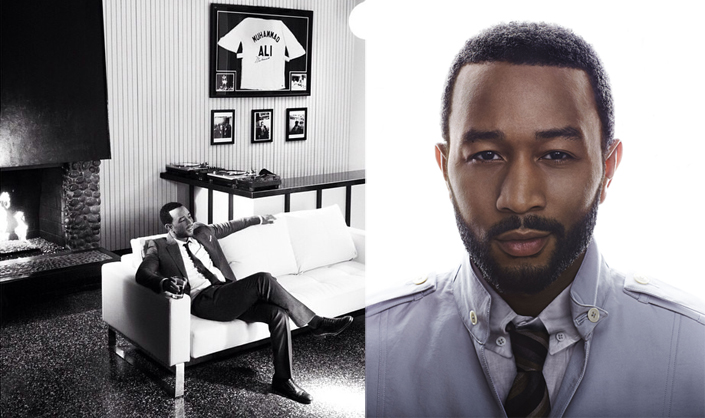 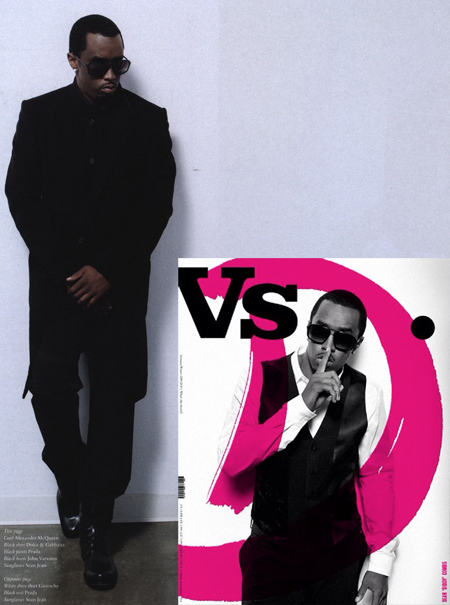 Now Thomas is the guy Puff Daddy calls in fashion emergencies, like when he has an impromptu dinner with Jay Z. In fact, In Case of Fashion Emergency, Break Glass was the name of a seven-window exhibit Thomas did for the Stephen Webster store on Rodeo Drive. He’s the one that makes Calvin Harris look amazing in the Emporio Armani billboards. He’s the one responsible for Best Dressed List-topper John Legend looking sharp on any occasion. And that’s just this year. Here, he describes what it takes to walk a mile in his fashionable shoes.

I’m in the business of making guys look cool. I’m solving a problem they all have: What am I going to wear, and how am I going to get it together? I’m trying to eliminate the fuss involved with that and give them a level of confidence. The thing about menswear is, you want someone to look authentic, effortless, cool and handsome. You don’t want people to say, “Did you see his shirt?”; you want them to think, “He looks cool.” Women should look like they made an effort, and men shouldn’t. A well-dressed man dresses appropriately for whatever he’s doing. If a man looks styled, you got it wrong.

The Transformation of Calvin Harris

With success comes knowledge, confidence and money. If people are comfortable with their success, they carry themselves differently. Calvin has better haircuts. He obviously lives very healthy. That all adds to what I do. Calvin is the face of Emporio Armani this season. It would be odd, and bad politics, to have him walking down the red carpet at the Grammys wearing Versace. It’s disrespectful and unnecessary. I try to be smarter than that. If I can make Calvin look the best he can possibly look, and I can do it with Armani, that’s win-win. Armani has a classic cool to it that’s understated. That sums up Calvin, so it works. 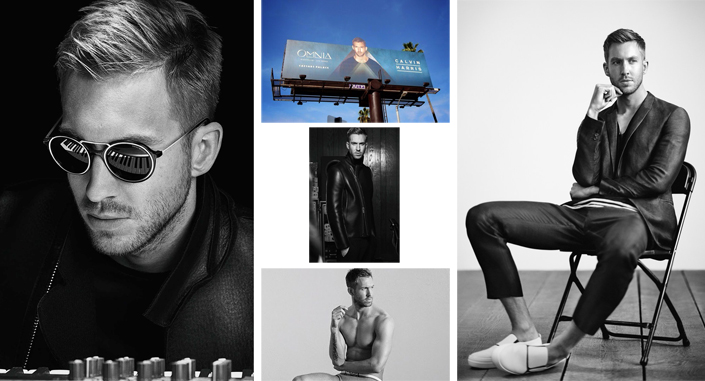 An advertising photo shoot is restrictive, because it’s all thought out. They have star pieces from the collection put together a certain way, and you can’t vary from that. Styling is not just having loads of shit on. Styling is sometimes making decisions not to have loads of shit on. I posted the pictures of Calvin in his underwear on social media, and people were like, “Great styling—he’s only wearing underwear.” But it’s not just a pair of underwear. I have a creative input that goes beyond clothes. There are a lot of people that make a photographic image an image. 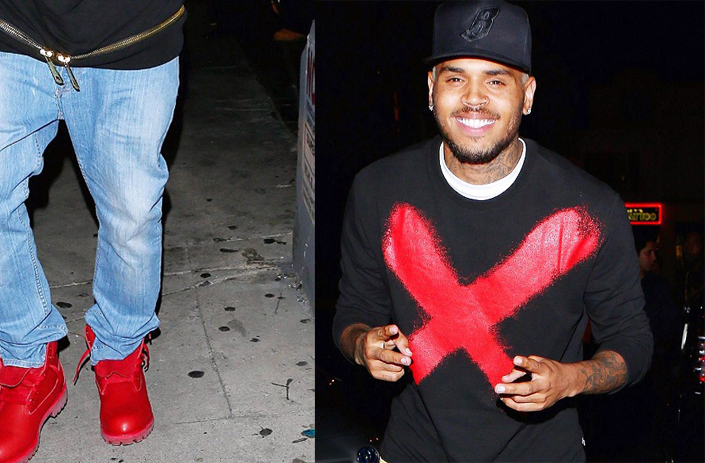 What the artist wears—even if they’re performing the same song—depends on what type of show it is, who the audience is, and what time of day it’s going out. If you’re doing Ellen, it’s kind of housewife-y. You don’t want to scare away a potential audience. Plus, it’s in the afternoon, and it’s in L.A., so you don’t want to overdo it in the dress; you look silly in their studio set. Yet, if you’re doing Saturday Night Live or Jimmy Kimmel Live, it’s more of a set and an institution, and showier. Everything is different, but it’s about remaining authentic to your artist and speaking to whoever the audience is.

In the case of Chris Brown on Dancing With the Stars, I worked with an L.A. designer called Ashton Michael. Chris was dancing, and there was a bit at the end where he does a backflip, so he needed stretchy material. We worked together to create something based on the movie Absolute Beginners, which is ‘50s done in an ‘80s way… But I was also thinking about this old ‘70s television show called Come Dancing. I had a dream where I had these dresses made with fitted bustiers and big ‘50s skirts underneath, with spray-painted polka dots, so I had Kid Zoom do those.

Styling for the Stage 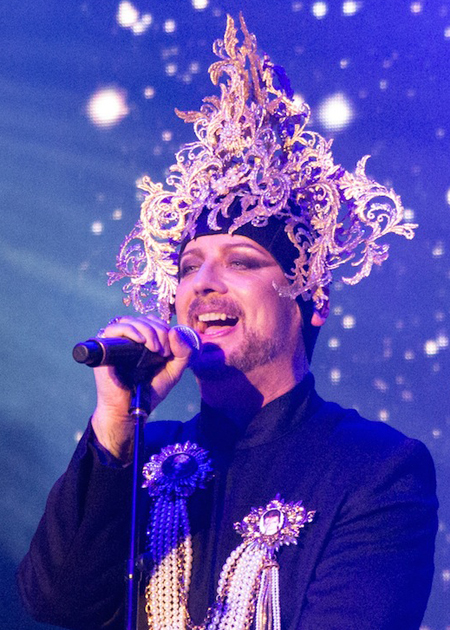 You can do more onstage than any other situation. It is about making the artist stand out among all the people onstage and be the leader of the pack. They all work together, but somehow, naturally, the focus is on the artist. They’ve got to be the best-dressed person onstage, but everyone else has to look like they belong there with them. The outfits have to react to light. You have to think about the people at the back of the auditorium; they need to be able to see. It’s like the Queen of England. She dresses in bright colors so she can be spotted in a crowd. That’s what we do on a stage show.

The starting point would be the set list. Any show is like a journey, where the artist is taking the audience through a range of emotions. You’re telling that same journey with the clothes. I would go to see them in a rehearsal studio to see how the band is together. I’d want to know the map of the stage. A set designer has a model or a mockup or computer-generated presentation of how the set is going to look, what’s going to happen, and how they pace that to complement the songs. I want to know what colors are used in what section. A lot of shows have video content; I want to look at that and see what’s on the screens when. And then there’s the lighting.

The Gentleman Collection and One T Shirt 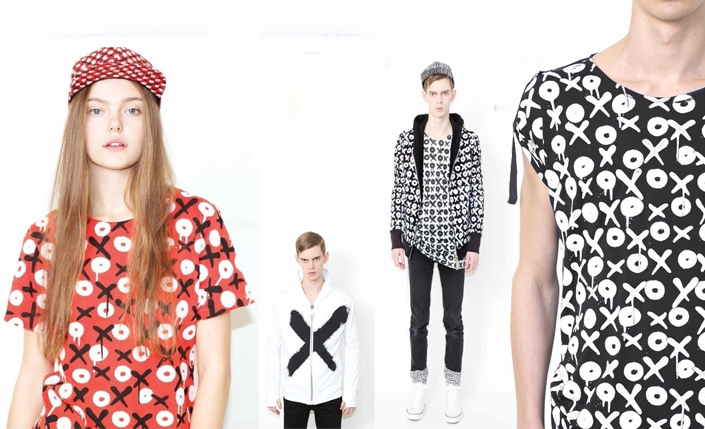 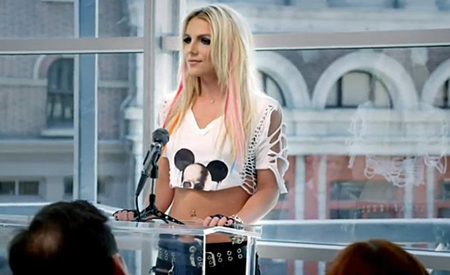 I got to know the jewelry company Jason of Beverly Hills through Puff Daddy and Chris Brown, and they asked me to do a collaboration. I don’t wear jewelry in a conventional way, and it wouldn’t work for my clients, either. I thought I would do something that doesn’t exist. I don’t want to frighten guys off, so I made jewelry for your clothes, not for your body. I did vintage button cufflinks, gold safety pins that represent punk, with diamonds and my button on the end, keychains in two sizes, belt loops that clip on. The jewelry is high-end, aspirational and expensive. [Watch: “Boy George – ‘I Don’t Love You’ – A Gentleman Collection Film”]

On the other end of the spectrum is a T-shirt collaboration with Kid Zoom. I met him when I did a video for Kanye West, and got to know him because of Chris Brown, who is interested in contemporary art. I commissioned him to do a T-shirt for a Britney Spears video, and we decided to do a T-shirt line. The cross is prevalent in his work, and I added an “O” and made a graphic print. The night Chris Brown released his single, and there was that shooting incident, he was wearing the sweatshirt, black with a red “X” and zips—very supportive of him to rock my shit.

Vanity Project and the Prince’s Trust 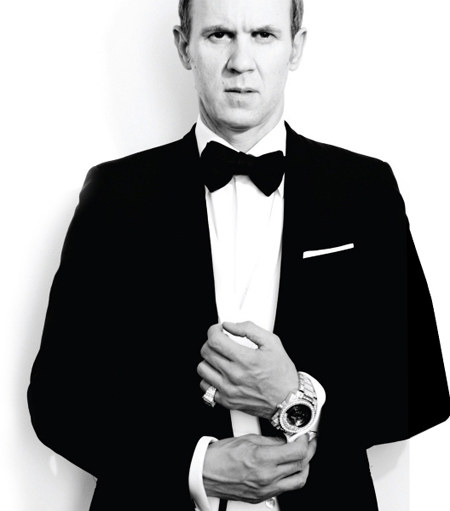 I realized pretty quickly that I wasn’t going to get to art college, because I didn’t have the qualifications. I needed money to get a portfolio together, to get an answering machine, to get money to go back to London, and get a job as an assistant. My dad suggested I apply to the Prince’s Trust. The Prince’s Trust was set up to help disadvantaged young people start their own business or get training. I applied, and they awarded me a grant to be a fashion stylist. The act of them giving me the money was almost more important than the money.

The book was the Prince of Wales’ idea. Just over 10 years ago, I was invited to a reception at St James’s Palace, where I met the prince. He said, “I’d like you to write a book to illustrate a Prince’s Trust success story, to raise money for the charity, to raise awareness of the trust, and encourage other young people to follow their dreams.” I kept everything I had ever done—backstage passes, tear sheets, Polaroids—and cataloged them. When 25 years was coming up, I felt like, now I have an opinion, now I have a point of view that is maybe valid, now I have experience and am maybe not embarrassed to do the book.

The book is about my work—drawings, pictures, tear sheets—in chronological order, to illustrate what I’d done. And it has 25 or so celebrities wearing an outfit of their choice that we did together from the last 20 years. Jessica Jones is writing the narrative interviews with them about their choice and what it means to them. There is also a sub-narrative, which is the history of styling and the relationship between fashion and celebrity, to show what was going on in popular culture at that time, and how I was moving, adapting and changing. The art direction is by David Costa (the Beatles, Michael Jackson, Elton John). Boy George has written the introduction, and the Prince of Wales has written the foreword.

I’m very lucky and grateful. I was a plumber from a small town in Gloucester. I didn’t like the world, so I created my own. Fashion isn’t for everybody, but I believe everybody has equal potential.

If You Like Brillz, Calvin Harris or Carnage, You’ll Love…

Forbes Richest DJs: How Many Years Must a Baker Bake to Make Aoki Cake?