With reporting from Sam Yu and John Carr

If trance is your thing, we sure as hell hope you made it out this past weekend to one of the most memorable times of our lives. We’re talking about Dreamstate, obviously, which returned to SoCal one year strong, and with many more options offered in almost every category imaginable. That’s all to say we had a blast with all you dreamers out there, and we’ll now run down a few of the reasons why we can’t get over it.

Rather than follow the same pattern of DJs passing the baton between each other through a subtle transition, Dreamstate broke away from the norm (as it has done since its inception) and flipped the script on changeovers. At the beginning of any given set, onlookers basked in a few seconds of silence before a narrative came into play to introduce the next act. It gave every artist on the bill a chance to start from scratch, providing a blank canvas for them to paint their own masterpiece with the music they’ve packed into their digital crates. —John Carr

Ben Nicky Burns Through the Bangers 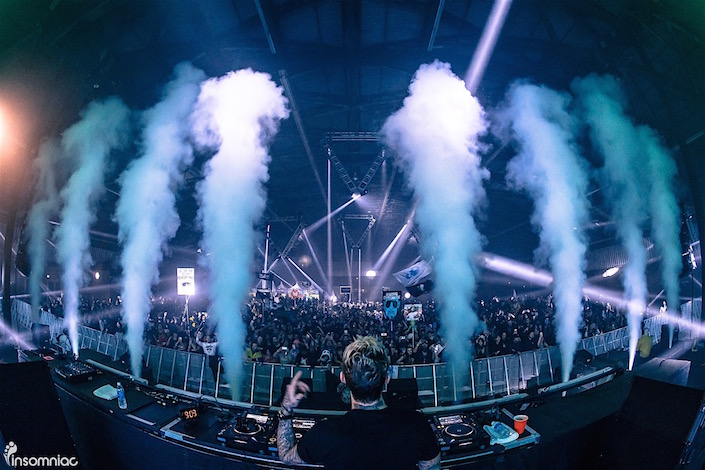 Ben Nicky has mastered the formula of attaching softly sung vocals (possibly with lyrics about “footsteps in the snow”—anyone?) to a destructive drop that encourages feet to slide across every corner of the dancefloor. He can burn through the bangers like no one else. Artists who feel they want to play more music in the hour timeslot they have to work with should take a page out of Nicky’s playbook. —John Carr 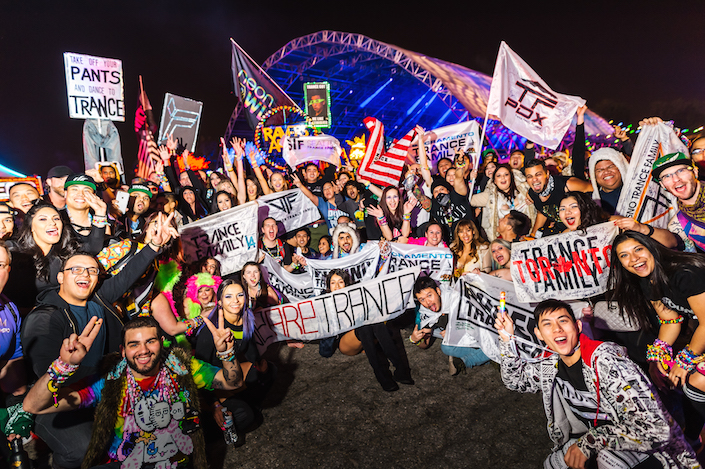 While there may be enough love to go around elsewhere in the dance music realm, no other group keeps it nice and tight quite like the trance fam. Dreamstate legit felt like one humongous family outing, as various communities around the globe proudly hoisted up flags and sported their regional colors. Repping where you’re from is a point of pride for trance families nationwide, yet it never gets in the way of being able to bond with anyone from an outside territory. Designated meet-ups at all hours of the day showed strength in numbers and displayed a level of acceptance and togetherness that the rest of the world could learn a thing or two about. —Sam Yu 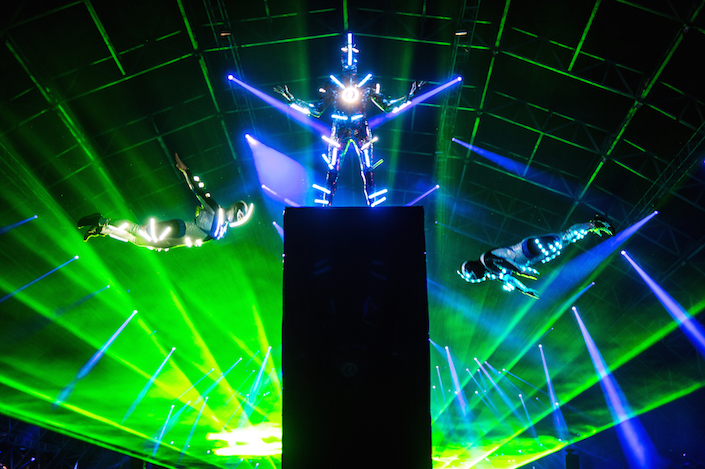 Anyone can wear armor outlined with neon lights, but only the bravest souls can don the same suit while making epic leaps to intimidating heights. Behind the golden arch of the Dream stage, three skilled aerialists owned the trampoline, flipping themselves every which way near the back of the crowd. It truly was a crazy spectacle, and it goes to show that you don’t always have to focus only on what’s going on in the DJ booth. —John Carr

Searching for Sunrise With Richard Durand

You may have noticed the numerous memes pouting about Tiësto forsaking trance a while back. One of the saddest parts about that decision came when he turned his back on his sought-after In Search of Sunrise compilation series. But Richard Durand came to the rescue and took charge of curating ISOS back in 2010, so his themed two-hour slot at Timeless was more than enough to take the crowd on an informed journey. From progressive picks to ultimate throwbacks, Durand wove in and out of the best tunes from nearly every edition of ISOS. —John Carr

Timeless Brought All the Nostalgia 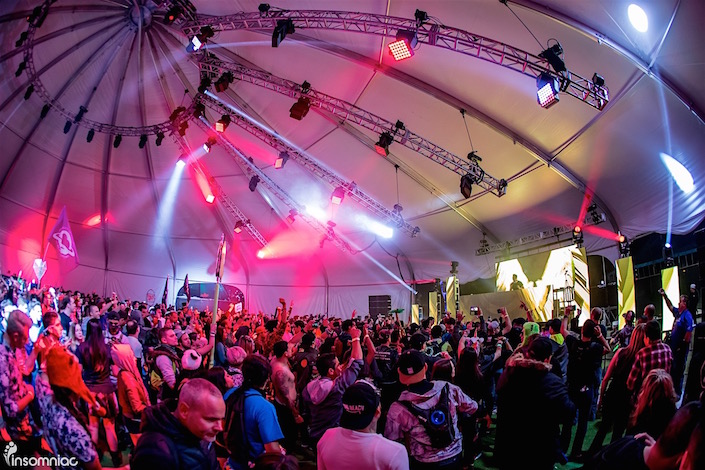 While we’re on the matter of throwbacks, there was a tidal wave of nostalgia over at the classics-over-everything stage, ahem, Timeless. It was here that some of the most authoritative figures in trance (try names like Binary Finary, Thomas Datt, and the Thrillseekers) opened up their figurative storybooks and took “seasoned” partygoers back to a time when they presumably first fell for the genre (myself included). I’m almost ashamed to admit how many records I almost forgot existed, but it’s all g because the old-school refresher wouldn’t have felt the same otherwise. —Sam Yu

A Little Rain Never Hurt Anybody

Indeed, Dreamstate saw some sporadic showers early on, but each stage provided enough shelter to keep Headliners from getting drenched. The natural sounds of the rain and each drop kissing our skin actually enhanced the mood while rich melodies flooded the space. —John Carr 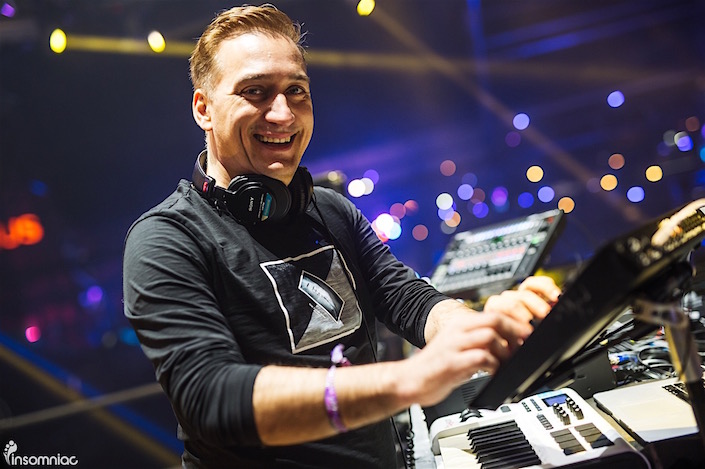 As images of a never-ending street spiraling into infinity flashed across the screen and performers rotated on hoops suspended in midair, Paul van Dyk took Saturday’s midnight slot straight to a climax as he perched behind the elevated decks. As Dreamstate’s official ambassador, PvD exhibited unrivaled zeal throughout his power hour. —John Carr

The Open Hot Cocoa and Coffee Bar in VIP Was LIT 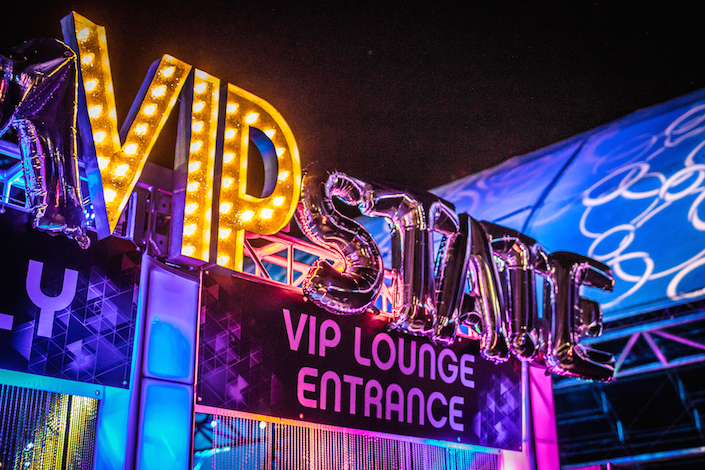 SoCal may never turn into a frigid dystopia, but the cold breeze did have people fiending for something warm and toasty. VIP stepped up to deliver hospitality that was second to none, rolling out a fully stocked hot chocolate and coffee bar. The delectable spread of mix-ins included butterscotch, Snickers, Reese’s peanut butter shavings, and mint chocolate crunch. Sipping on one of these truly hit the spot, and all the extra amenities sprinkled on top made the entire elevated experience one you would be sure to Snap to all your friends. —John Carr

Dancing on Behalf of a Fallen Friend 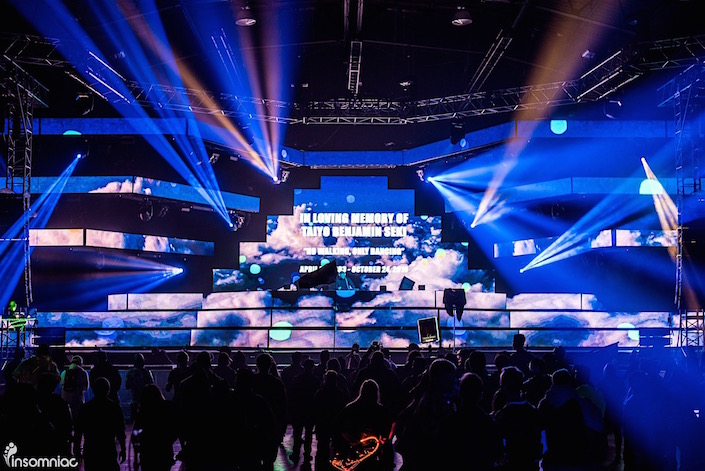 It required some serious happy-place thinking to fight the waterworks when I witnessed how many friends came together to celebrate the life of Taiyo Benjamin Seki. The Headliner was involved in a fatal car crash a few weeks back, so his group endearingly decided to dance in his name during Leiel’s set at Sequence. As he ripped through his USB to cue up a firestorm of psy, a message honoring Benji and his “no walking, only dancing” mantra stayed up on the massive screen while his closest friends honored the words’ meaning. —Sam Yu

A Nice Touch From Technology

Fine, I’ll admit it: Even at an uber-social gathering like Dreamstate, sometimes my eyes become glued to my social feed, web browser, and Pokedex app. Under normal circumstances, there is no sort of roadblock for this antisocial activity other than an occasional outspoken stranger. However, the Insomniac app put me in check with a push notification reading, “Say hello to the Dreamer next to you.” I decided to strike up a talk with the lady holding a huge fiber-optic flow toy to my left, and I even got a chance to swing it around myself. Good on you, Insomniac app. —John Carr

Ferry Corsten Tugs All of the Heartstrings 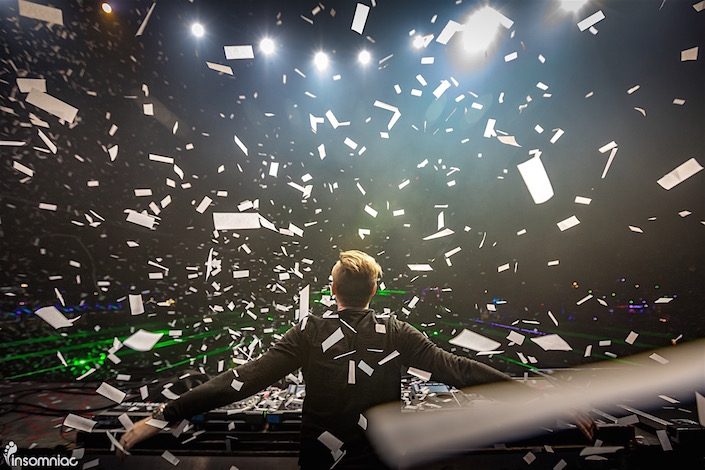 Ferry Corsten resurrected his Gouryella project last year, in hopes of having his instrumentals speak to our purpose in the world. On an episode of Night Owl Radio, he expanded on the reasoning behind his live show: “What is it that connects us? Where do we come from? Where are we going? [These are] the bigger questions that keep us busy thinking sometimes… there’s a lot more to dance music than just banging away.” During his set, a well-paced string of messages was relayed on the screen to open up our minds as much as our hearts, which had been pried apart all weekend long. —John Carr

Psytrance Is the Future

This point—which was made earlier in the year during the Dreamstate panel at EDMbiz— became evident when Headliners formed a line out the door at Sequence, as they itched to get closer to the speakers. It’s easy to see why that would be the case, because the stage played host to the most in-demand names from the trippy-dippy branch of trance. Even the curious souls who swung in to see what all the hype was about presumably stayed longer than they’d initially made time for. I lost my shit a few times throughout the weekend, but none more than when Alpha Portal, a side project of Ace Ventura and Astrix, took the stage and blew my mind to smithereens via cerebral and spiritual AF sounds I can’t stop replaying in my head. —Sam Yu