There is a history of artists channeling music into their art. At the most basic level, listening to music while working is a regular source of inspiration. This is an important point to understanding the art of someone like Keith Haring. According to “Conversations” found on the Keith Haring Foundation website, “At all hours of the day and night, his studio resonated with the sounds of an infinite variety of music; hip-hop, house, reggae, rap, disco, rock, classical, Caribbean, Brazilian, African, and Top 40. In his travels, he would always carry a selection of tape compilations made for him by various friends and DJs, which he would blast while painting murals as well as at the openings of his exhibitions.”

“It’s tied to an experience, versus just sitting down and making a beat. It is deeper than the sound of the beat.”

At the other extreme is synesthesia, a neurological phenomenon whereby the stimulation of one sense leads to an automatic experience in another. “Chromesthesia” is synesthesia involving the senses of sight and sound. Artists with this condition experience sounds as colors and vice versa. As a result, they often paint what they hear. While it is unconfirmed whether or not the influential Russian painter and art theorist Wassily Kandinsky was a synesthete, Alanna Martinez of The Observer says, “His colorful linear and geometric canvases are meant to evoke the notes of a musical score.”

Not content to translate between mediums, artists began combining the two. “Intermedia,” a term coined by ‘60s artist Dick Higgins—or “multimedia” art, as it is more commonly known today—is the production of content using two or more mediums. These combinations have been the result of innovative artists and/or in collaboration with custom fabricators looking to realize their artistic vision. Artists operating on a budget are forced to use separate technologies specifically designed for each medium and rely on their physical juxtaposition to generate experiential overlap. Such is the case with Jennie C. Jones’ most recent “acoustic paintings,” which are wall-mounted sculptures that must be activated by sound. One problem with this approach is that when a collector purchases a piece, the sound is typically not included. The buyer is left to his or her own devices to recreate the experience.

SEE ALSO: Why Experiences Are More Important Than Stuff 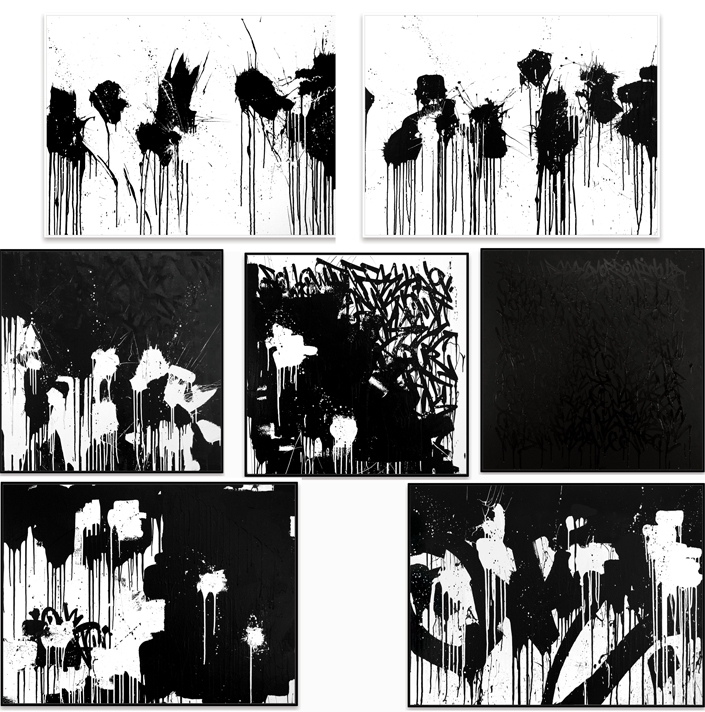 Spotting this niche market, a new stopgap has been introduced by a young company called Soundwall. Named for their product, they produce wall-mounted audiovisual artworks that double as wi-fi-enabled speakers. At first introduction, the idea of a painting that plays prerecorded sound feels more like a gimmick than an important innovation, but contrary to what you might think, Soundwall is not a painting with a speaker attached to the back. While you could slap a canvas on the front of a speaker, you would be not only muffling the sound output, but you would be hard-pressed to find a high-performance speaker as flat as a painting that could be easily mounted to a wall without the help of a trained installation team.

Soundwall, while not quite as flat as a standard canvas, is a mere three inches deep. Embedded in this depth is an electroacoustic exciter that produces sound by inducing uniformly distributed vibrations across the canvas itself. It is a “distributed mode loading system” produced at their factory in Boulder, Colorado. This means the speaker is incomplete without the canvas, not an add-on. Consequently, the potential of the sound is directly related to the size of the canvas. The larger the canvas, the higher quality the sound. Smaller canvases lose out on the lower-end frequencies that would need to be supplemented with a subwoofer. According to their website, the smallest Soundwall they will produce is 24″x36″ because this is the smallest size they can create without significant loss of audio quality. Standing off to one side of a Soundwall with your eye parallel to the surface, you can witness the vibrations of the canvas firsthand.

While the display of the product in their New York showroom is akin to that of any high-art gallery, the Soundwall company is neither a traditional gallery operator or an art dealer, but rather a high-tech canvas company currently collaborating with artists to help others realize the possibilities of this new multimedia platform. 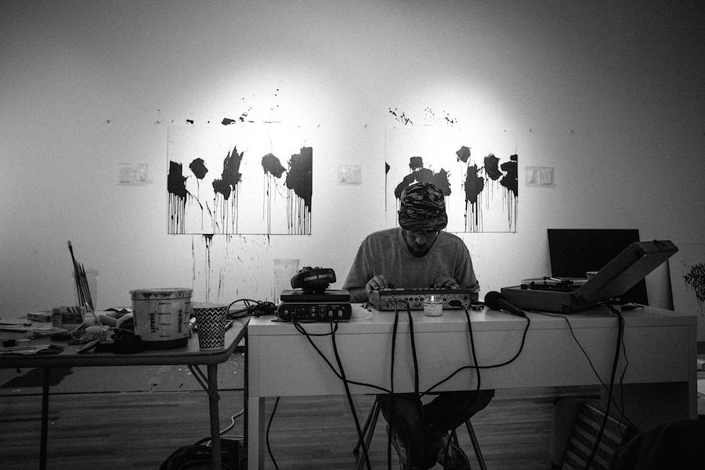 Their current collaboration is with Brooklyn-L.A. transplant Bisco Smith. A perfect test subject for the Soundwall, he has for years worked simultaneously between the mediums of sound and paint to communicate his visions, but he has never been able to combine the two so seamlessly before. When Soundwall approached him, he jumped at the chance. Living in their Tribeca showroom for the duration, he produced 12 original artworks, each with its own custom beat. The result is Soundwall’s latest collection, 12.

“Many art forms use similar descriptive terms across art disciplines,” says Jean Pederson in “Music and Painting, a Harmonious Relationship” on artistsnetwork.com. “Music, painting, drama and architecture use terms such as repetition, variety, intensity, rhythm, dialogue, balance, unity and so on.” It could be that the technology required to link separate mediums has merely been lacking until now. 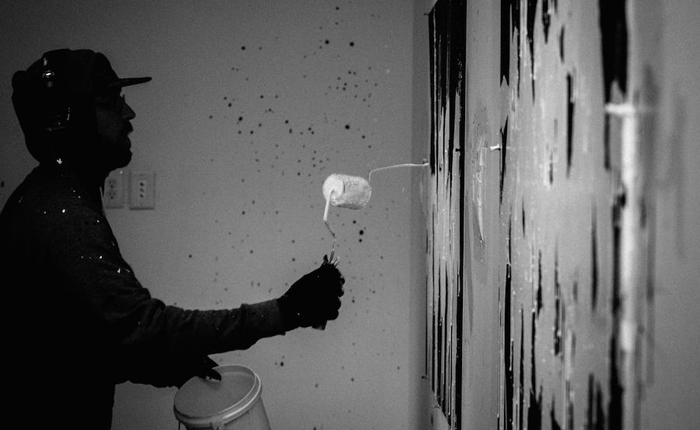 In describing his work, Smith says, “I took my songwriting, my stream-of-conscious writing, and my love for freestyle rap and started putting it on canvas… the music adds levels.” It is unlikely he is a synesthete, given his dichromatic paintings. He attributes this to a combination of expressing New York, a place that is more urban and gritty than his current home in Venice, and his experience separating colors as a part of the screen-printing process.

However, Smith’s work is intimately tied to his own personal memories. While still in New York City, he would immortalize his days sonically, saying, “I would go out on a Sunday in Brooklyn, where everyone is selling vinyl on the street, and buy a dope vinyl for a dollar or two, go home, make a beat off of it. And then it’s tied to an experience, versus just sitting down and making a beat. It is deeper than the sound of the beat.” With Soundwall, he can then take these sonic memories and further expand upon them in another medium. The result is work that is both visually and sonically compelling.

If this wasn’t enough, the computer in the back of a Soundwall not only stores and plays the artist’s originally programmed recordings, but wirelessly connects the internet. Through the Soundwall app, the artist can load new audio to any number of their paintings through a private, online account, even after sale of the artwork. This enables the artist to remain connected to the collector and regularly expand upon the work. 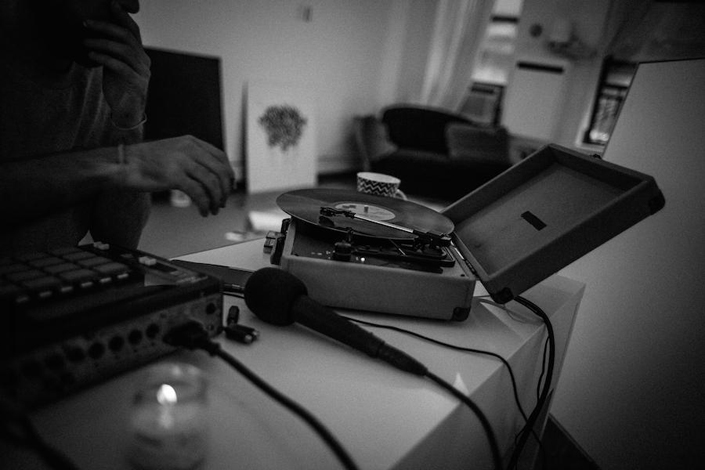 The collector also has the opportunity to stream music through the Soundwall from any number of online music apps via their computer, smartphone or tablet. In discussing the Soundwall’s versatility, Smith raises an interesting question about the next logical steps: “Someone may say, ‘Why not just put a screen there?’ Most technology finds itself ingrained in the glass. For me, there is more humanity in that front layer, so you get the human with the tech.”

Soundwall is an original piece of multimedia art which sells at a luxury price point, but the company plans on selling affordable blank canvases in the near future for artists looking to produce their own works and/or collectors to commission one. This could be the beginning of some very creative output, so keep your eyes and ears open.

All photos provided by Michael Vidoli.