When Nina Las Vegas bounces into a Los Angeles café, one is instantly reminded of Pippi Longstocking. It’s not just her pigtails or her youthful, makeup-free face that harkens back to the beloved children’s book character; it is also her irrepressibility, her confidence, her strength, and her rejection of female musician stereotypes. She is wearing an oversized T-shirt, comfortable ankle-length khakis, and white, pointy-toed sneakers whose silver tips bring a disco touch. “I dress like this,” says the imminently approachable Nina. “It makes girls feel comfortable, and I like that.” 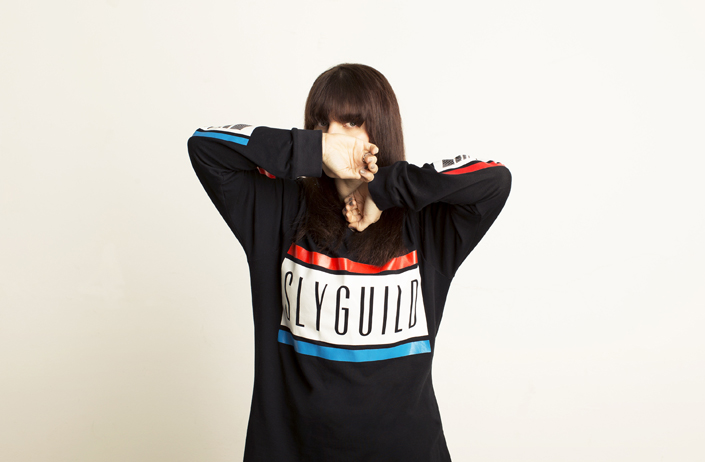 Before meeting her, the thought of Nina can be intimidating. The 30-year-old DJ/producer—born Nina Agzarian, half Egyptian/Armenian, half Australian—curates and hosts the popular Mix Up Exclusives specialty dance show on Australia’s influential triple j station. A four-hour program on Saturday evenings from 9pm–1am, Mix Up Exclusives features an hour of Nina in the mix and three different guest DJs hosting each of the other hours. Streaming worldwide, Nina puts the show together during the week, recording it live in Ableton. She stays involved during its broadcast, listening to the show when she can, and tweeting as it airs.

“The last thing I want to do is regret these life choices I make. I don’t want to come home sad and having missed anything.”

If that wasn’t enough, she just started a monthly series showcasing the tracks she loves for that particular month. Ahead of (and during) her current three-week tour of North America, she put together a number of mixes to give audiences a taste of what was coming. This tour includes stops at SXSW, where Nina curated a showcase, and Miami Music Week, where she is DJing at HARD, Craze’s event, T.E.E.D.’s event and Soho House. She and production partner Swick also just released a fiery remix of Anna Lunoe’s “Say It Again.” This follows their two-track EP Don’t Send, released in 2014 on Skrillex’s groundbreaking Nest imprint. Soon to come is another EP, this one to be released on A-Trak’s cutting-edge Fool’s Gold label. These were put together in the midst of Nina’s NLV Presents tour, which took handpicked national and international talent across Australia.

Firmly accepted into the boy’s club for her talent, she and fellow Australian DJ Levins, along with our own Diplo, cofounded Heaps Decent in 2007. According to its website, the nonprofit “is an Australian-based dynamic arts organisation working with young people & emerging artists from marginalised & disadvantaged communities, providing a means by which they can tell their story in their own way. Heaps Decent supports change, positive futures & the development of high-quality Australian music with a unique identity.” Diplo is not as involved these days, his schedule not permitting; not being Australian doesn’t help, either. But both Nina and Levins sit on the board of the organization, which is going from strength to strength.

Despite her busy schedule, Nina found time to sit down and give us a piece of her mind on a variety of different subjects. Here she is, unfiltered, and in her own words.

“I can’t tell you how much it works in your favor when you do things for the right reasons.”

I am currently single, and that makes my life easier, but biology makes it hard. The reality is, if I want to have kids, there’s a certain time to do it. It’s a real thing for me. I want to have a family, but I’m not in a hurry to stop for someone not cool enough.

I’m touring my ass off right now, but I make sure to see my friends. The last thing I want to do is regret these life choices I make. I don’t want to come home sad and having missed anything. I can’t tell you how much it works in your favor when you do things for the right reasons.

I’ll say no to a money gig if it’s at a wrong time or I’m not feeling comfortable about the situation. I just don’t care about money that much to feel like shit. It’s so easy to make money fast in this game, especially with the EDM. If you get a SoundCloud hit, someone will throw a bunch of money at you for no reason at all. I worked my guts off for five years playing every club in Australia for less than 500 bucks. I have savings because I worked hard at it, so I’m not in a hurry to make anything. What’s the point?

I don’t read think pieces about females in EDM. I host parties. I never do all-female lineups, but I make sure women are represented. I play female musicians. I support women, and I move forward. I don’t talk about it; I just do it. More people need to do stuff rather than talk about it.

Years ago, there was an article about certain festivals not having women on the lineup. Instead of bitching about it, I went straight to festival dude and asked, what’s the deal? That’s such a better reaction, and that’s such a better way to do it. The internet and articles are permanent, but conversations are real. If you’re going to be in EDM, you have to be prepared to put yourself out there in any element of the game: male, female, promoter, DJ, musician, audience member. It’s all about being strong in any element of the creative field. Biology and history and social expectations make it less common, but they don’t make it harder.

“Years ago, there was an article about certain festivals not having women on the lineup. Instead of bitching about it, I went straight to festival dude and asked, what’s the deal? That’s such a better way to do it.”

In Australia, the girls run the scene. If an all-female lineup is run by a woman, that’s fine. If it’s run by a man, that’s kind of weird, and I wouldn’t play it. There’s no shortage of girls that DJ; there’s definitely a shortage of girls that make beats. There are very few girls who want to make club stuff without having their voice on it. That’s okay. I use my voice as a sample, but I don’t sing.

It was a fear of wanting to put myself out as an artist that stopped me for a while. You have to ask for what you want and not be scared to ask for it. As soon as I realized everyone is okay with asking, and okay with confidence, I was like, “Cool, I’m going to play this game well.”

It’s cool to be a female in a male’s game. I can stand out if I’m good. If I’m not good, then I don’t stand out. The people I have to look up to—Skrillex, Diplo, Lorde, Taylor Swift—they’re confident people. That’s what I aspire to be, and that’s okay if you can back it.

Being a girl gives me good ears, because I want to dance. I want to sing along. Or I want to be weirded out. I don’t need to be intellectual about music to enjoy it. Often what I like is kind of fruity. Also, I like things heavier. I can get into harder stuff, from Baltimore trap to hyphy. I’m okay with phases. I hate it when people say, “Oh it’s just a phase; it’s going to pass.” Why not just be in it? We’re DJs. We’re allowed to be in phases.

I share a lot. I don’t have anything I won’t give to anyone else. I’m not someone that will hold everything to me. I’m past that. There’s no point. Don’t you want good music to be heard? If you share something, it comes back to you, and that’s so much better. I always give people that are playing big sets good stuff.

“If you share something, it comes back to you, and that’s so much better.”

I made Dropboxes for people like Skrillex. I send stuff to Annie Mac. I send stuff to Benji B. I look at their playlists, so if I’ve got something I feel they might like, I send it to them. I have Dropboxes with Australian kids. I have Dropboxes with some indie dance kids. I have a bunch of email groups. I set one up with a bunch of DJ friends. I have a rap email group. I go out a lot. If I like something, I ask what it is. I hit people up. If I see someone talking about a remix, I’ll say, “Can you send me that?”

I did the Mad Decent Boat Party. If Skrillex or any of those boys are playing, all the guys just stand behind them and hype it up. There are no girls. It’s just bros high-fiving each other. That’s the jerkiest part about the whole scene. Everyone is welcoming; they just don’t realize they look like idiots. I was on at the same time as Flosstradamus, the biggest Mad Decent act at the time. I sent Wes a text from the Baywatch Stage as I was playing, saying, “I need you here. If you come, people will come.” He came running, and he stayed on our stage the whole night.

“I’m a proud Diplo supporter. When people meet him, he remembers them. He’s funny. He’s not a drug addict; he barely drinks. He’s a cool role model. He does amazing things for amazing reasons. Diplo has the ability to change the way people perceive stuff, and he does.”

I’m a proud Diplo supporter. When people meet him, he remembers them. He’s funny. He’s not a drug addict; he barely drinks. He’s a cool role model. He does amazing things for amazing reasons. Diplo has the ability to change the way people perceive stuff, and he does. He made a reggae album. He brought regional sounds to America. He gives every kid advice that he talks to. I want him to be as famous as possible, because he made a track with Swick, an 18-year-old kid from a garage in Melbourne. Calvin Harris would never make a track with an 18-year-old kid from a Melbourne garage.