“I think Danceteria was a remarkable space, like Warhol’s Factory or Max’s Kansas City, or CBGBs. Jim Fouratt and Rudolf Piper had this amazing finesse to hire people that they believed in. Why were the Beastie Boys the cleaning crew? Why was Madonna one of the dancers? Why was Sade a bartender? You’re talking about a magical moment, a magical space.” —Mark Kamins 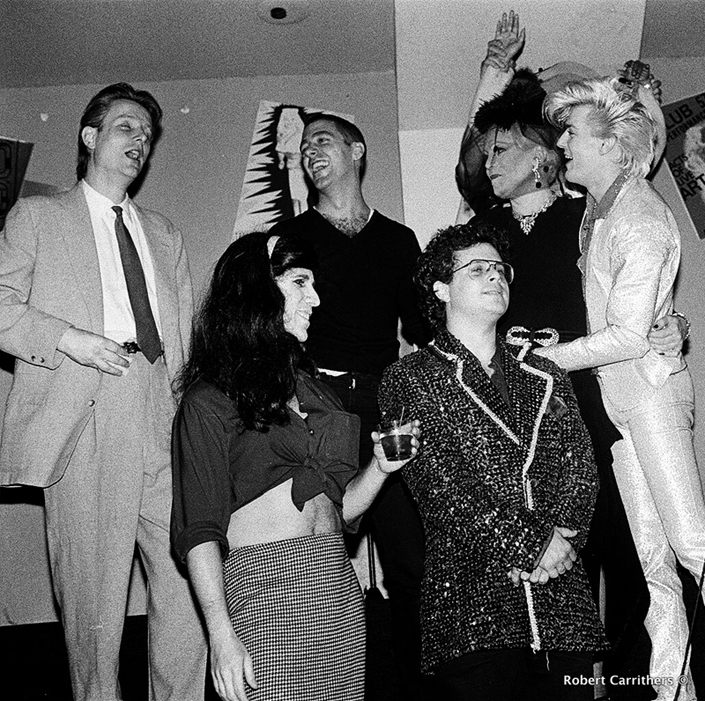 In the spectrum of golden-era New York City nightlife, Danceteria was a place where one could indulge in both dancefloor hedonism and intellectual discourse. It was grittier than Studio 54, more commercial than Mudd or Hurrah, and open for business each night of the week.

The legendary New York venue had several manifestations. It first opened on 37th Street in 1979, but it was its second incarnation, at 30 West 21st, that it is remembered for. The club ran from ’82 through ’86 and boasted a wide range of talent including bands, DJs, performances, art exhibits, film screenings, video art, comedy, cabaret and fashion shows. The club was a magnet for artists who went on to achieve international fame. It ran on four floors, it ran late, and it ran hot.

“A sensibility had been growing. It was punk and ironic; it was anti-conscriptive. We wanted to challenge people’s expectations.” 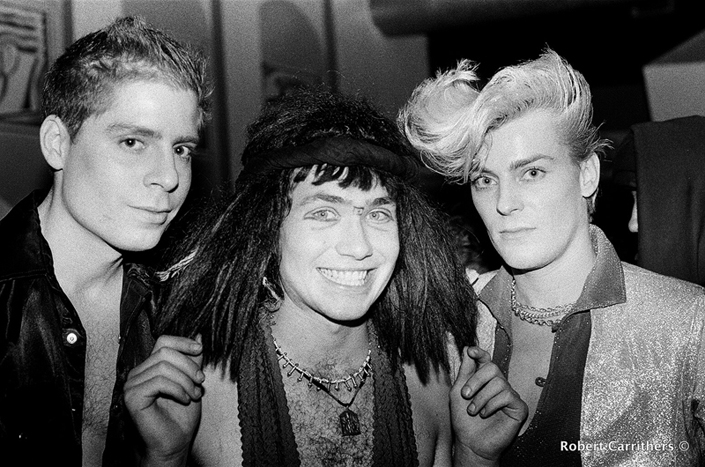 “I was there seven nights a week, week after week,” remembers cofounder Rudolf Piper. “I never thought it would end. It wasn’t just a club; it was a lifestyle.”

Danceteria took a unique approach that allowed it to become a full-service cultural hangout. It had a main floor for dancing, where DJ/producer Mark Kamins held court. “That DJ booth became my library. I had my whole collection there—two to three thousand records,” Kamins recalls. “In those days, when you got hired by a venue, you worked every night. As a DJ, what more could you want?”

Kamins played a wide range of sounds including Afrika Bambaataa, Quango Quango, Ofra Haza, Fela and Lime. “I would play 10-hour sets,” Kamins says, “and I played everything. It was never boring, because people didn’t know what to expect next.”

The first floor featured bands and Anita Sarko DJing (she also played in the VIP room). Initially booked by Jim Fouratt, and then by Ruth Polsky, Danceteria gained a reputation as a nexus of high/low culture, and as a center for all things new wave. New Order, the Smiths, Duran Duran, Sonic Youth, Devo, Madonna (who was then dating Kamins), Sade, Nick Cave, the Beastie Boys and LL Cool J (who was also an employee) played the club alongside highbrow acts like Philip Glass, Oliver Lake, Laurie Anderson, and John Lurie and the Lounge Lizards. 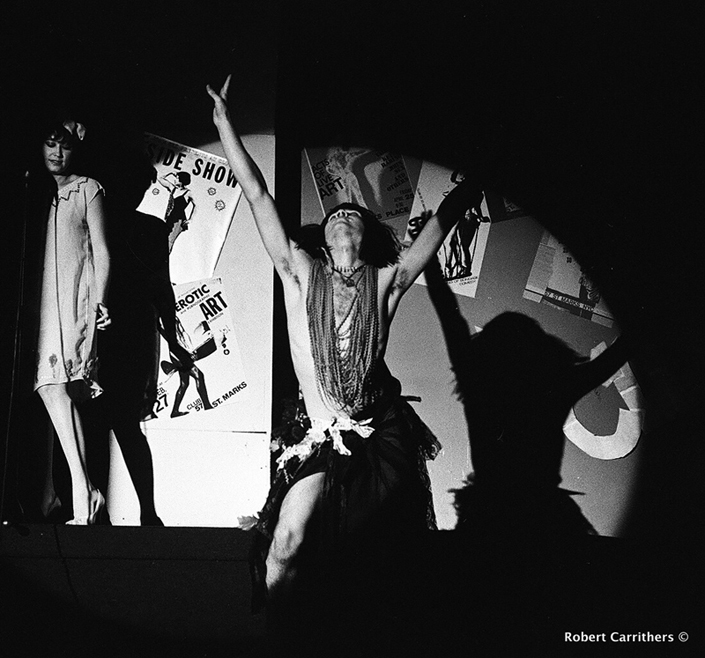 “Ruth Polsky was brilliant,” remembers Sarko. “A sensibility had been growing. It was punk and ironic; it was anti-conscriptive. We wanted to challenge people’s expectations. There was a sense of anarchy and an implied critique of something propertied and slick like Studio 54.

“We would do theme nights—one called Depravnik Island, I would play this vapid ‘official’ Soviet music, along with the Carpenters and Barry Manilow. Ann Magnuson was performing as Anoushka, the Soviet Chanteuse. We had a night called ‘Dinner Party,’ and David Bowie sat at the piano and played extremely banal lounge music. It wasn’t about giving people what they wanted; it was about putting them in a provocative context, challenging their habits, and doing it with a sense of fun.”

This sense of provocation had antecedents in German playwright Bertolt Brecht’s “Theatre for Learning” approach, which was rooted in a stinging and humoristic critique of the bourgeoisie (check out The Threepenny Opera). Brecht’s sensibility has had a huge impact on modern performance art, and his influence could be seen in many performers at Danceteria. Karen Finley (another employee), John Sex, Ann Magnuson, Frank Maya and Diamanda Galas all brought a withering intensity to the theatrical proceedings.

It was Ronald Reagan’s America, and AIDS was decimating the gay and artistic communities. The disconnect between the wave of unregulated stockbroker money, new wealth, and the absence of real healthcare options—along with the mounting death toll—created a staggering grimness in the city. The AIDS activist group ACT UP’s mantra of “Silence = Death” summed up the imperative to challenge the status quo at both the municipal and state levels of government. It was a struggle reflected in the themes of the performers, and a component of the general tenor of downtown arts culture at the time.

“There were a lot of ambitious, creative people involved…We wanted to defy convention and make the nights unique.”

Complementing the performances, and also creating another unique zone, was the video lounge curated by video art duo Kit Fitzgerald and John Sanborn. They showed work by Beth and Scott B, David Lynch, Nam Jun Paik and Kenneth Anger, along with early music videos, reedited found footage, and original material. This was a time when videos were first gaining prominence, and this lounge was the first of its kind to feature an ongoing curated program. “It was also a place for a shyer person to go try and get laid,” recalls Jim Fourat. 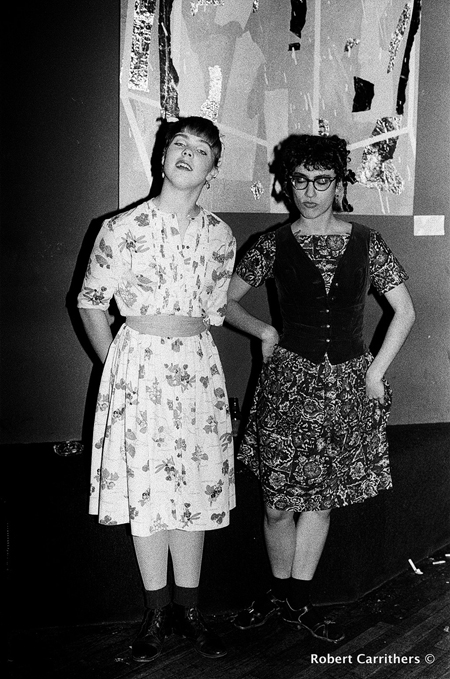 With the great bands, challenging performance art, independently minded DJs, a groundbreaking video program, unbelievable staff, and a restaurant, it’s hardly a surprise that many patrons essentially lived at Danceteria. Said co-owner Rudolf of the crowd: “Clubs are about music and people. The secret to a good club is magic and energy, transporting people to a different reality—or to no reality. Make them have a good time, and at the same time, recharge their batteries. But the responsibility is on the people. They are the ones that are going to make a great night.”

I remember getting into Danceteria as a young art student, seeing Nina Hagen perform, and then going to dance to Fela and War on a different floor, chilling and watching strange film loops, going to doorman Haoui Montaug’s crazed cabaret No Entiendes, and seeing people from different scenes mixing. At its best, Danceteria felt like a city unto itself. It had a charged Blade Runner/Airport vibe. With New York City rotting and Reagan as president, the club was both an escape and a response to all that was going on. It was a raging club, yes, but in comparison to what was going on outside the doors, it felt sane and safe in its revelry and provocation.

“There were a lot of ambitious, creative people involved,” Anita Sarko opines, “and there was a sense of urgency, given the political and social context. We wanted to defy convention and make the nights unique.”

All photos by Robert Carrithers 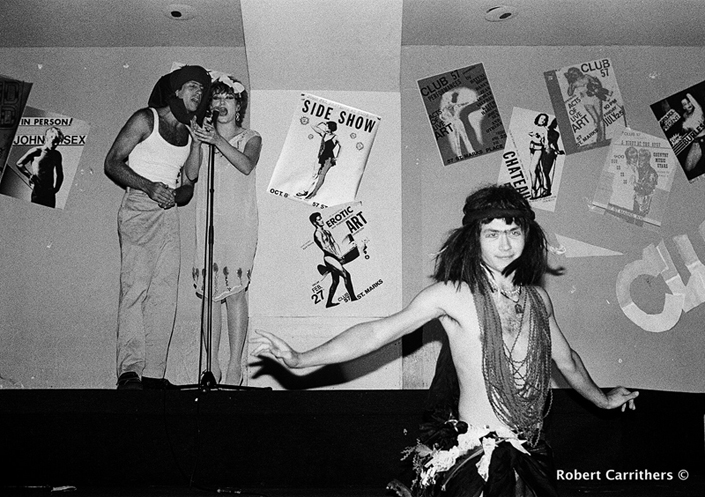 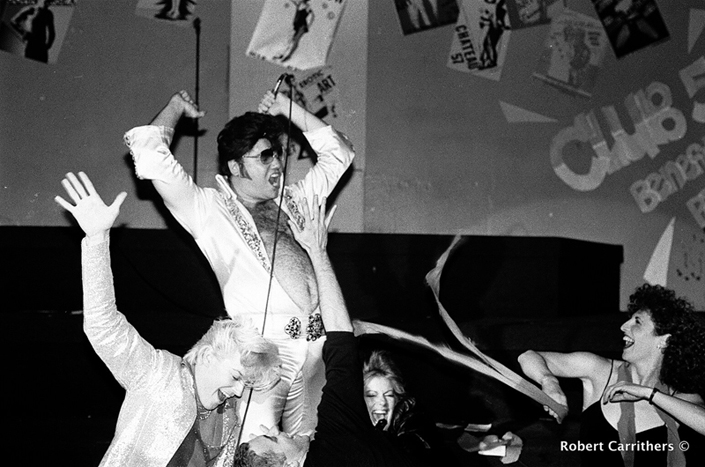 “Elvis (played by the one and only, the talented J.P. Dougherty, who went on to star in some great shows on Broadway, such as Les Miserables, Hairspray etc.) comes out of hiding and performs at the Club 57 benefit at Danceteria and is worshipped by John Sex, Scott Wittman, Vicky Schrott and Tracey Berg.” –Robert Carrithers 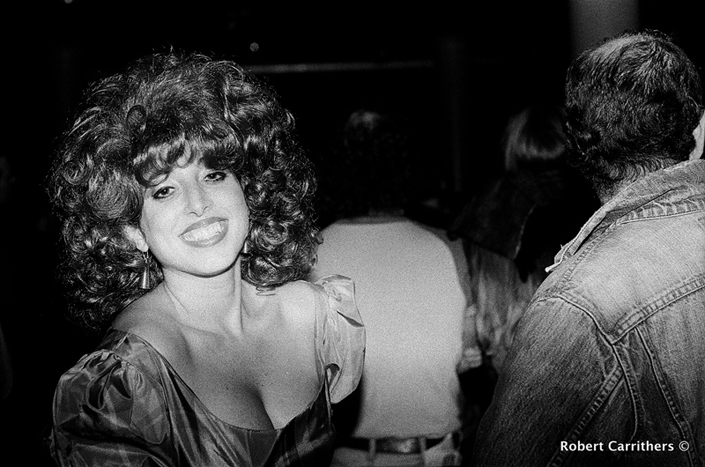 “Fashion designer icon Katy K basking in the limelight (not the club) at Danceteria.” –Robert Carrithers 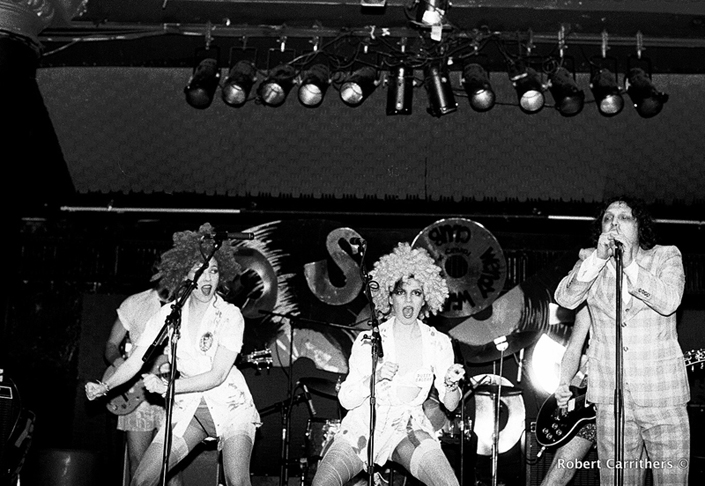 “The one and only The Sick Fucks performing at Danceteria.” –Robert Carrithers 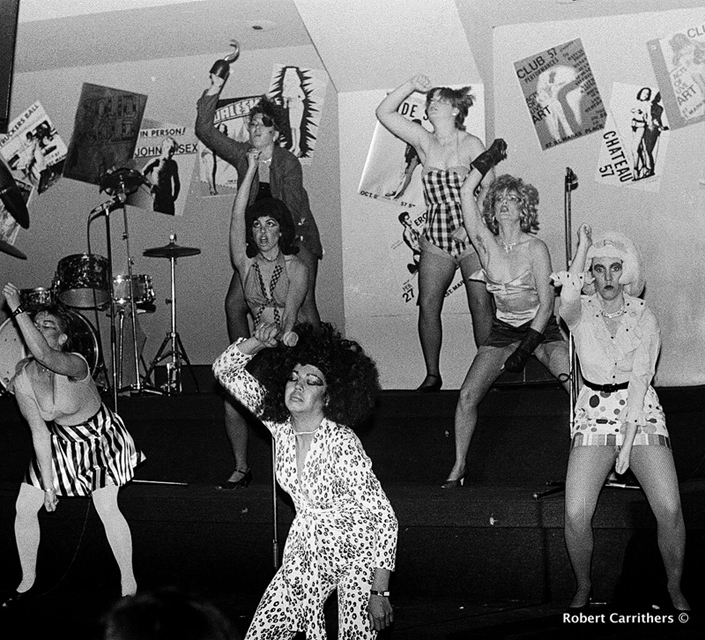 “The Club 57 and Danceteria go-go girls dancing the night away. I think there’s a go-go boy there too. In fact I know there is! And a pirate go-go girl with a hook for an arm. All the other go-go girls were very friendly with her.” –Robert Carrithers 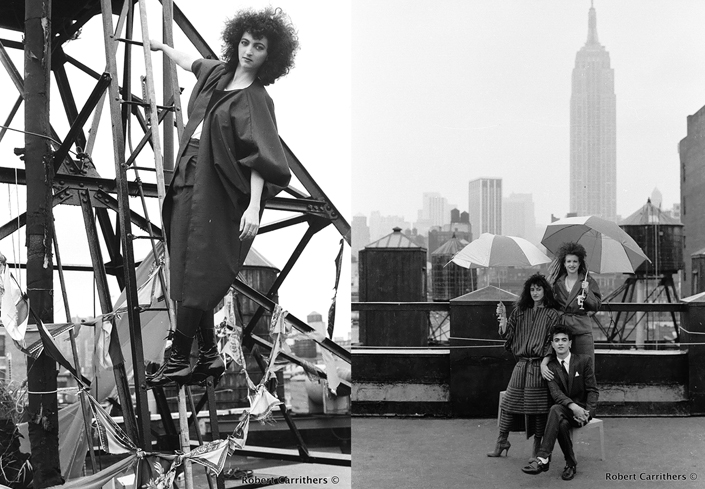 “[left] The lovely Pilar Limosner hanging with style on the water tower on the roof of Danceteria. [right] Carmel, John the Greek, Michelle Young and the Empire State Building on the rooftop of Danceteria.” –Robert Carrithers