Unless the rock you’ve been hiding under has no internet connection, you’ve heard about Bryan Cranston’s epic cameo during Above & Beyond’s EDC Las Vegas set, where the actor known to many as Walter White came out to push the button during the song his name inspired. What you may not have heard is the story of how that moment came together. That’s where two-time Stanley Cup-winning forward—and fledgling DJ under the name Pendemic—Dustin Penner comes into the picture. 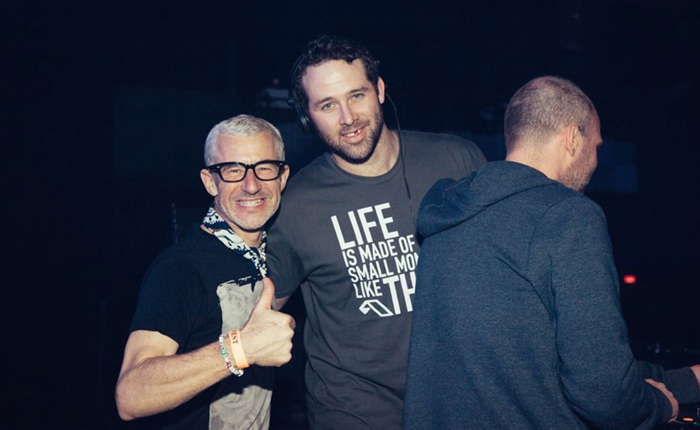 We’ve known for a while that Penner is a massive Above & Beyond fan, so when we texted him after their set at EDC to get his opinion on Heisenberg’s guest appearance and got a cheeky reply, we knew we had to investigate further.

“I told him, ‘Brian, you don’t have to jump up and down.’ You know, just teasing him a little bit. And he’s like, ‘Nah I won’t.’ When he got down, we were like, ‘You were jumping a bit, eh?’ And he just started laughing.”

Tell me how this all went down.
Eric and Jania Lee—they’re friends of mine, and they said, “Hey, you want to split a table [at EDC] with my friend who’s a director and producer? He’s going to bring Bryan Cranston to dinner.” I was like, “Yeah sure, let’s go to dinner and then split a table on the Marquee SkyDeck.” So I didn’t know if he was going to show up. Like, why would Bryan come to EDC? It didn’t make sense.

So, he shows up at dinner and is going around introducing himself. We have like 25 people at this Mexican place, and I go up to him and say, “Hey Bryan, I’m Dustin.” And before I get to my last name he’s like, “Oh, I know who you are,” and we both start laughing. Then he bends my ear for 30 minutes, talking hockey and the Kings and the Rangers.

Then I ask him, “What are you doing at EDC?” And he goes, “Well, I’m in a documentary they’re going to show on Sundance. It’s in the EDM world.” And I said, “Well, you’re in luck, because the people we’re going to see tonight are Above & Beyond, and they’re close, personal friends of mine.” Me and Ilan [Bluestone] are sitting together, and I go, “Imagine him pressing the button during ‘Walter White.’” 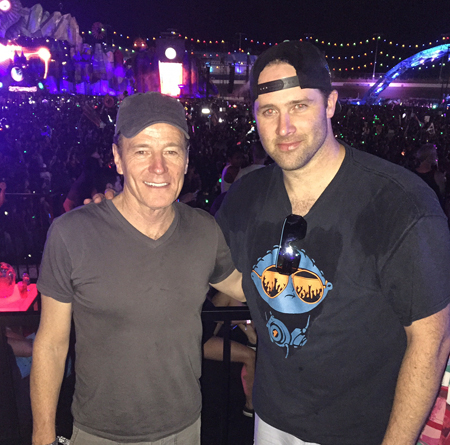 I text Jono [Grant of Above & Beyond], and I say, “‘Walter White’ tonight. Got it?” He retorts, “I don’t do requests.” So I go, “It’s not me making the request; it’s Heisenberg… and I think we should do what he says.” [Laughs] And you could tell he freaked out a little. He goes, “Are you serious?!” “Yeah, I’m sitting right here with him.”

Then James Grant [Above & Beyond’s manager] calls me, and the wheels just start spinning… They had to make changes and revamp there entire set in just over an hour. “Do we do two push-the-buttons?” I’m sure it was quite heated, knowing the personalities involved! [Laughs]

So, they didn’t have “Walter White” planned for their set?
No. This all happened around 10pm, and they were going on at midnight. We were sitting at a restaurant probably still an hour away, and my helicopter was leaving at 11. So I’m on the phone with James: “James, he said he’s going to do it—unless he goes back on his word, and he doesn’t strike me as an individual that says I’m going to do something and then doesn’t do it.”

So I asked Bryan, “Yes or no. It’s not gonna hurt my feelings either way, but you said you’re doing a documentary. Some great market research would be pushing the button in front of 80,000 people with your name as the song. Jono and Tony and Paavo and all the Above & Beyond crew are huge fans of yours. They named a song after you.” He casually responded, “Yeah, no problem.”

That’s amazing. I saw him afterward, and I was like, “So what did you think?” He was like, “Well, as an actor, I’m used to being in front of people. Just not that many people.”
I told him, “Bryan, you don’t have to jump up and down.” You know, just teasing him a little bit. And he’s like, “Nah, I won’t.” Then you saw him jumping up. When he got down, we were like, “You were jumping a bit, eh?” And he just started laughing. 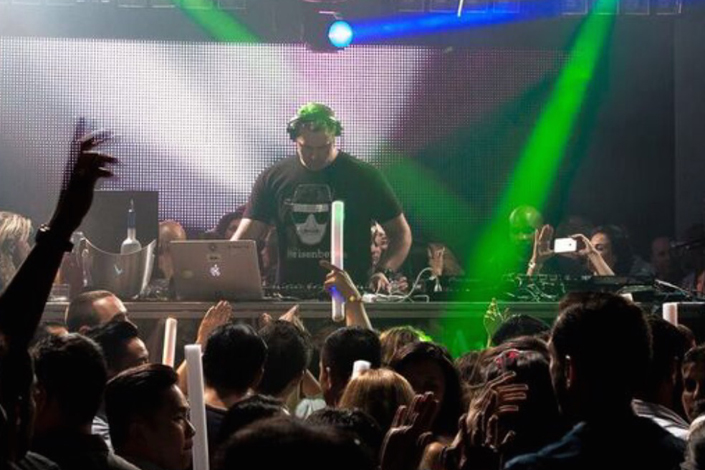 How did you get in with the A&B guys, anyway?
Twitter.

You’ve been a fan for a long time, right?
Yup, since OceanLab. So like, 2002/2004, somewhere in there. Then I got on Twitter like four or five years ago. All I do is just follow my favorite comedians and musicians so I can see when they’re in the area. The best thing about Twitter is when you have the blue check mark, and people see that, they get a notification and they’re like, “Who’s this guy?” and they follow back. Then it builds slowly and progressively.

Ilan was the one who really got me in there, because Ilan had never been to California. We were talking on Twitter, and he said, “Hey, I’m coming to California for the first time; can I stay with you?” And I said sure. I was the first person he saw when he landed at LAX, and we drove down to Newport and hung out. That’s the point where I stopped being a fan and became a friend. That started the process. Then Jono asked me this summer, “Hey, do you want to come on the bus with us on our tour?” And it was just such a great experience being on the bus for three weeks with these guys.

How was that?
Great. With Above & Beyond, everything’s so passionately done. Everything’s beautiful and iconic and legendary. They have such a great following, and people love their music. It touches so many people. I see it at every show I go to, no matter where I am. You see the love and the energy that anybody from the Anjunabeats and Anjunadeep labels bring. Above & Beyond will run you through the gamut of emotions. You can be happy, sad, upset, crying during one of the songs, and by the end of it, you’re dancing. It’s a great journey. 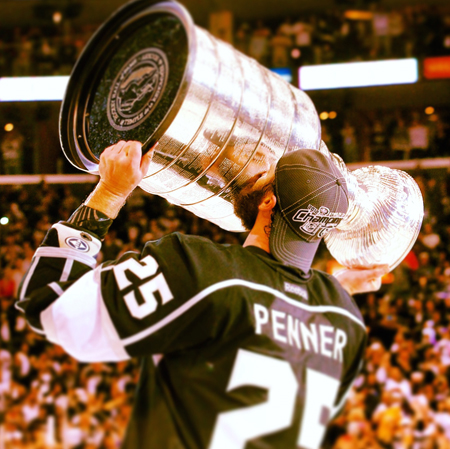 When did you really fall in love with dance music? What turned you, a two-time Stanley Cup-winning hockey player, from a casual fan into someone who just had their first headlining gig not too long ago.
The first time was probably “I’m Blue” by Eiffel 65 or “Hang on, Here We Go” by Jet Fuel. That was one of the songs I first heard in a dance mix ‘93 compilation. Then there was 2 Unlimited, and then OceanLab, and Tiësto’s old stuff like Nyana, In Search of Sunrise, and Elements of Life. It just kept growing; then I found my niche.

You see a lot of people coming into the scene now and look at what’s the most popular thing. That’s what I did back then, but I found my sweet spot early on, which was progressive trance. Nowadays, it sounds like someone put cutlery in a blender. They don’t know it, but everyone’s on their own journey here in an auditory sense, where they figure out what they like and what speaks to them.

Did you get a lot of other hockey players into dance music?
Oh, yeah. [L.A. Kings defenseman Drew] Doughty, [L.A. Kings forward Trevor] Lewis, there were a lot of guys. I had a friend—DJ Ryan Wade from Edmonton—who made my first mix. I knew we had 16 minutes of warmup, so I was like, “Here’s the songs in this order; mash it up this way.” Everybody would come in [to the locker room] in Edmonton and ask, “Who does your music here?” and they’d say Penner. So I had people making mashups for other rinks in the NHL.

When was your first EDC?
Two years ago, here in Vegas. This is my third year in a row.

How would you describe it?
It’s like a gathering for people who are mostly comprised of positive energy. It’s a judge-free zone and an experience like no other that I’ve encountered. There’s so many people from so many different walks of life that all come here and all gel in a synergistic way over their favorite type of subculture or subgenre.

A Journey Through EDC Las Vegas in 1 Minute

EDC Las Vegas 2022: A Look Inside Our Newest Additions