We’ve all walked into a packed club at 1 am, right behind that dude who insists he’s the promoter’s sister’s fiancé and is “for sure on the list.” We’ve all played a mental game of Jenga just to maneuver our way to the heart of the dancefloor, only to see a breaker circle around a wasted girl sprawled out with her dress over her head. We’ve also certainly witnessed randos swarm the DJ mid-mix to insist he play that one new Beyoncé track for Ashley What’s-Her-Name’s birthday (you know, that girl over there!). And, cue spilled vodka soda on the mixer.

Imagine it like the guy who pees in the corner of your bedroom at a house party, all belligerent. He thinks it’s hilarious, but now the party reeks.

Two months back, America’s Favorite House DJ himself had one of those nights. Headlining the Red Maple club in Baltimore, DJ Dan almost got Bieber’d behind the decks for refusing to play Top-40 for some guy’s girlfriend (Pro tip, guys: No chick will ever think you’re hot for hitting the DJ, especially when you miss). Soon after the scrappy patron was bounced, Dan got on the mic to cheering fans and let ‘em know: “We don’t put up with that bullshit!” Hours later on social media, Dan kept it admirably positive: 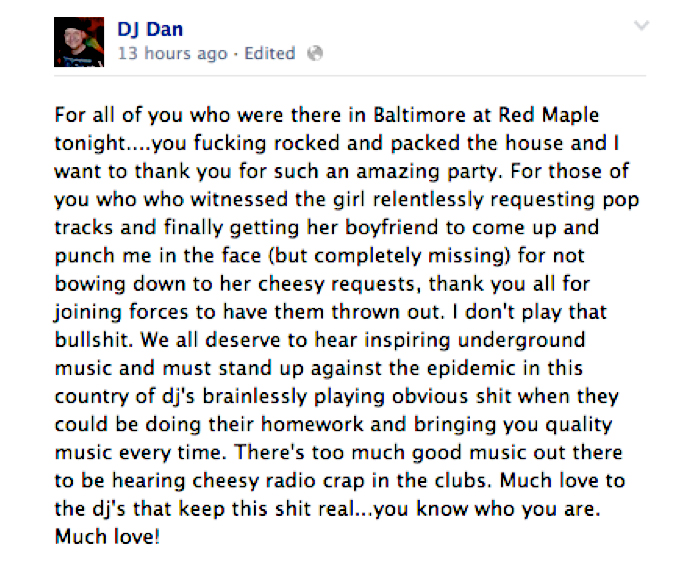 As he is a longtime purveyor of acting right at the club, and because it’s likely fresh on his mind, we knew Dan would be the perfect DJ to ask about the rules of the dancefloor. Some might say that the only rule of clubbing is that there are no rules, but let’s be honest: Would you really want that guy at your party? Probably not.

Why do you think club etiquette is so important?
It’s like having a party of any kind: You don’t want someone ruining the fun for everyone. Sure, go crazy and be a freak, but being a jerk just makes it not fun for everyone. Imagine it like the guy who pees in the corner of your bedroom at a house party, all belligerent. He thinks it’s hilarious, but now the party reeks. Gotta be thinking about your friends, even if you don’t know they’re your friends yet!

What would you say is the number one rule that partygoers should keep in mind when going out?
It’s really just the golden rule: Treat people as you’d want to be treated. From a DJ’s perspective, the number one rule is that if you are a guest of mine, don’t drink my entire bottle of vodka and look at me confused when I want a drink. Don’t be rude to the staff and then tell them you are with me or grab my ass while I’m playing—especially if you don’t know me. Even though this seems like it would be fun for both of us, it just comes off as startling, and I may trainwreck the mix. Imagine if you were a lawyer in an office and I dropped in while you were with a client and grabbed your junk in front of them and ran off. See, only the grabber is having fun.

Without rehashing any scarring memories, what exactly went down when you almost got punched a few weeks back? Were you surprised? What was the reaction inside the club and then after on social media?
The place was packed with my hardcore followers, and the vibe was amazing. A girl who obviously did not know anything about me (or the night) kept coming up to me asking for a request I did not have, nor would I ever play. I politely told her that I did not have it. She said, “How can you not have that? You’re the DJ, you should have that.”

Then, at about 1:30, she came back up asking for it again with a guy next to her. I honestly didn’t even realize they were together and, trusting that the place was packed with people who came to hear my set, I figured he was a fan and he would hear me out and help me get through to her—especially since he could see that I was still mixing and could not carry on this conversation. I looked at him and said, “Can you please explain to her that the track she is asking for is just not my style or sound?” Shockingly, he started lunging at me and said something along the lines of, “Bro, you need to stop being disrespectful to her and play the song”—to which I responded, “No, actually, I don’t.” Then he ran up into the DJ booth and swung at me; but fortunately, he missed. Right then, my friend stepped in between us, until the security guards came to have them removed from the club. While this was happening, I shut the music off and pointed right at him and announced, “This guy just tried to hit me because I wouldn’t play his girl’s mainstream request.” The crowd booed at him, and then I made my announcement that was captured on video.

When I walked in with my friends after my set, they were still cuddling on the hot mess of a bed!

Nightmare. Sounds like they could have used some of your Act Right Juice. Tell Insomniac readers the story behind that!
I had a 20-person list on New Year’s Eve in SF a while back, and it was a pretty wild group of friends from L.A. Many of them did not know boundaries, so I came up with a list of rules called “Act Right Juice”—kinda like spraying a cat with water if they act up. Everyone was in top form that night!

Remember old flyers used to have “act right” kind of rules printed on them back in the day? Do you think there’s something about that spirit that’s been lost?
When I first started clubbing, there was always a rule my friends had before we left the house: Pace yourself and keep your shit together. If you get too messed up and act a fool, you are on your own. This held everyone accountable, and there were very few people “showing their asses,” if you will. Today it seems more like a set of very strict rules, as opposed to back then, it was kind of like your own responsibility to those around you to not be an asshole. This was to everyone’s advantage.

What was the biggest infraction of general clubbing etiquette you’ve ever seen?
In Toronto a couple of years ago, I flew in and headed straight to my hotel to meet some friends. They brought one of their friends with them, which was fine since we were all meeting for dinner. This friend of theirs (we’ll call him John) obviously knew my room number since he had been there earlier and evidently knew my last name. While I was in the middle of my set, he met some girl, and they decided to bring their burning passions back to my hotel room (which was right next to the club). He told the front desk that he was me and that he forgot his key in the room. They gave him the key.

Whoa. Please tell me you didn’t walk in on them.
Oh, yes. When I walked in with my friends after my set, they were still cuddling on the hot mess of a bed! He told me that he brought her back because she wasn’t feeling well. Unfortunately, I couldn’t see her face because she was hiding under the blanket of shame. They’d drunk all the liquor out of the mini bar, opened and eaten most food items, and had sex on my bed (I won’t go into details, but it was a messy scene). There were used towels all over the bathroom floor. I was so shocked, I just grabbed my bag and went to the afterparty, hoping the situation would just go away somehow. Upon checkout the next day, I told the hotel manager what happened, and they immediately took responsibility for failing to card him and did not charge me for the extras. It was insane!

What advice would you give clubbers who have an unruly friend with them acting up?
Tell them you are going to head to a different club, and then lose them on the way!

Everyone gets a little too out of control now and again. How can you best save face after one of those nights?
Honesty and apologies! I guarantee that if that person came up to me the next day and gave me a heartfelt, honest apology I would give him a hug. However, I would let them know that if they ever pulled that shit again, I’d never invite them out with me.

A lot of upsets happen after being denied a request, denied at the door, or denied guestlist. What do you say to people who experience this?
There are so many factors involved when getting put on a guestlist. By the time your name actually reaches the final list, it has been handed down to about four different people, and mistakes are bound to happen. Be patient and make sure you know whose list you are on. Always remember that the guestlist person did not speak to you on the phone and does not know you personally. If you are not anywhere on the list, ask for the person who added you and try and resolve it that way. If they can’t come out to get you in, pay the entrance fee and think about it from the club’s perspective: You are getting a top DJ, great sound, state-of-the-art lighting and visuals—and all of this costs money for the club to bring this to you. For myself, I just pay if there’s a mixup on the guestlist. I want to support the night and keep it going.

Are there any parties you play that always seem to have exemplary attitudes? Any shining examples out there?
You know, I have found that any time we do fundraisers for our Burning Man camp, whether it’s King King, Monarch, whatever, everyone who comes in has a high respect for the venue and for each other. We all know that we are going to see each other many more times, and this gives them a sense of responsibility and accountability to “Act Right.” Also, Burning Man itself has very strong rules about accountability, and everyone respects and follows those rules. At the end of the day, it’s all about respecting your fellow man!

Some people might say the only rule of clubbing is that there should be no rules. What do you say to that?
Anarchy! Sure, clubs should be a liberating experience for letting out the freak in you, but if we start hosting cockfights in clubs and legalizing religious sacrifices, people may forget to actually dance.