Every year, UK trance trio Above & Beyond throw a special party in a sexy international location to celebrate another 50 episodes of their Group Therapy radio show, simulcasting it live to tens of millions of fans around the world. Last year, they took their party all the way to Australia with a stadium event in Sydney, with images of the city’s iconic Harbour Bridge adorning the event’s imagery. They’ve just released the aftermovie for the rather large-sized event.

The sumptuously produced mini doc features plenty of spectacular party footage, as well as the boys and their support crew of Lane 8, Ilan Bluestone and Grum cruising around the city’s scenic harborside locations (plus a few amusing shots of the trio wearing hardhats during setup prior to the show). 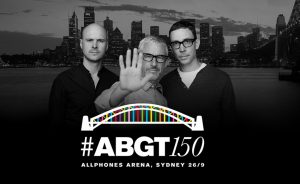 There’s also a selection of rather emotive interviews with fans, some of whom traveled across continents just to be at the show, emphasizing the worldwide community vibes of the Group Therapy concept. It’s also sountracked by a rather special new track, “Another Chance” from Oceanlab, the trio’s much loved alias with iconic vocalist Justine Suissa.

Watch the #ABGT150 Aftermovie above, and prepare to overdose on slow-motion footage and the kind of stadium-trance emotion Above & Beyond are seasoned experts at inspiring.