We’re less than two months away from the second edition of EDC Mexico, and the official festival trailer has just been released! One look at footage from the inaugural event, and you’ll know why Insomniac can’t wait for the second edition, happening February 28 and March 1 at the Autódromo Hermanos Rodríguez in Mexico City.

In addition to a killer musical selection and trailer, we’ve also put together some of our suggestions of what to do in and around Mexico City before and after the event.

We’ve already sold out the first three phases of GA tickets and first two phases of VIP tickets, so to ensure you get yours at the lowest price available, buy your passes and book your hotels on the EDC Mexico site now. Both single and two-day passes are available. 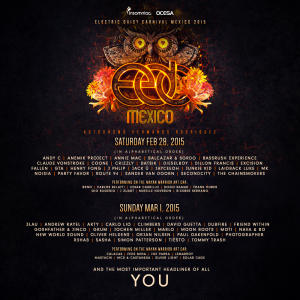