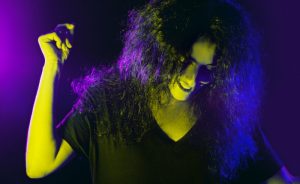 What was your favorite toy as a child, and when did you stop playing with it?
I didn’t really have toys, but I had hammers and nails. [laughs] It’s true! They used to get me all these dolls and toys, and all I wanted was a hammer and nails.

What part of the day do you look forward to the most?
Getting on my headphones, actually. That is normally at the end of the day, because I get about 400 emails every day, and I have to reply to everything, which takes up a lot of my time. So once that is done, I just get my headphones on and fly on the music.

What’s the best time ever you’ve ever had without spending money?
Going to the beach, laying in the sun. Oil, dip, oil, toast, oil, dip, toast, oil, repeat.

What’s your most treasured possession?
My health. I don’t want to say it’s a possession, because I have a lot of things and they’re all amazing; but health is the most important thing—and happiness.

What is your favorite word?
Fuck.

Do you owe anyone an apology?
No, not at the moment. I have apologized many times, obviously, but right now I’m good.

What’s the last thing that you googled?
I googled yesterday about multivitamins.

What’s the last sound you would want to hear before you die?
That I was loved.

Do you have any recurring dreams or nightmares? If not, what’s the last dream you remember having?
No, not recurring. I had a dream not long ago—last week, actually—that this person came from behind me and spooned me. That was it. I woke up, and it wasn’t real.

If you could have one magical or superpower, what would you want and why?
To be able to fly. I love flying, so if I could fly and have that power like an eagle, that would be awesome. What’s so amazing about eagles is they can look in the sun and they never go blind. Isn’t that incredible? They’re just amazing animals. I’d like to be that.

Have you ever had a brush with the paranormal or supernatural?
Yes, and it’s actually a freaky, freaky story. I was not on drugs; I was super sober. It was lunchtime in Ibiza, and I went to this little bar/restaurant. I sat at a table, and there was a couple next to me who started staring at me, and I froze completely. I could not move. I could not look around, and I looked at them and one was transforming into weird creatures—the man’s hair went really white, and his eyes went really red, and it was like, energy, energy, energy looking at me. The girl next to him, I started seeing tentacles coming out of her hair in snaky movements, and I couldn’t move. I was literally paralyzed.

My friend who was out getting something from the car came back and sat down with me, and at that moment, it broke, and I just looked at her and said, “Let’s go. Let’s go now.” This was one of the first years that I started going to Ibiza, and I asked a lot of friends of mine who lived there and who are quite spiritual, and they told me that the area that has the biggest cemetery on the island. And normally when people die, because it’s an island, they stay there. They don’t fly out. It was all surreal babe, really. And my friends told me something very interesting. They said, “The next time this happens to you, you have to look back with force and push them away, and that’s how you fight it and they don’t get to you.” I’ll never forget it, ever. Whether there are spirits that are good or bad or lost in their ways, it’s out there. There’s a lot of energy there. They say that either the island loves you, or it spits you out. It depends on how you approach it.

What do you remember about your first kiss?
Ooohhh. I was 13, I think, and I fell in love with this boy, and that’s when I first kissed someone. It was really nice and platonic. It was so sweet, really lovely.

What four words best describe you?
Passionate, affectionate, short-tempered, and I can’t handle disrespect. I don’t know what the right word is for that, but that really throws me off, anybody who disrespects me or disses me, I just cannot. I become very aggressive.

What is the last impulsive thing that you did?
I fought with a bouncer last week in Miami. [laughs] I was drunk, and he triggered me. He put his hand on my chest and told me I couldn’t go in the booth, and I flipped out. I pushed him and screamed, “You motherfucker! Get out of my way!” So everybody is now calling me the kung fu panda.

Do you have a pet? Tell us a story about her. Also, what would your ideal pet be, and what would you want it to do in an ideal world?
I had a pet once with my ex-partner. His name was Charlie and he was a shih tzu. I trained that little puppy for three months when I was in London. I knew nothing about dogs, and it just opened up a new world for me. It was quite an experience learning how to condition them and teach them everything. Unfortunately, I can’t have a pet now because I’m always on the road, but maybe one day if I settle with someone, we’ll have another pet.

What is your best personality trait?
I stand my ground. I’m very righteous, and I have to have everything right. Wrong doesn’t exist in the dictionary of my life. Anything that goes wrong just flips the fuck out of me.

Do you believe in any conspiracy theories or urban legends?
Oh, big time. I’m a huge conspiracy theory fan. I spend hours on the net looking at that stuff, but that’s a whole different talk show.