Canadian powerhouse deadmau5 is arguably one of the most involved in dance music when it comes to allowing his fans a glimpse inside his private sphere via his social networks, for better or worse. Now he’s granted us something of a particularly intimate and awesome nature: a tour of his spectacular new studio, which he has showcased with a live two-hour DJ set. 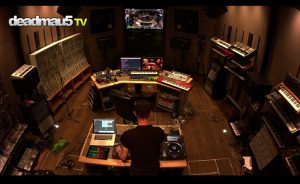 In recent months, deadmau5 has been sharing via his Instagram the process of building the studio inside his new gothic estate in the Canadian countryside, and the finished product represents the realization of a hardware nerd’s wildest dreams: a room that is filled wall-to-wall with modular synths, Moogs, mixers, and other wondrous music-making machines.

Last week, he showcased the studio via his Twitch TV channel with a live DJ set focused squarely on two hours of heads-down techno. There’s a little bit of Adam Beyer, a few hits of Joseph Capriati, and of course, a few offerings from Maceo Plex.

Watch above to dive indulgently into the two-hour set from deadmau5.