Steve Aoki has plenty of reasons to celebrate in 2016—not only rising several spots to #7 in the recent DJ Mag Top 100, but even more importantly, he’s marking the 20-year milestone of his Dim Mak label. In addition to a world tour that’s visited just about everywhere, Aoki is marking the occasion by collaborating with the RVCA fashion company. 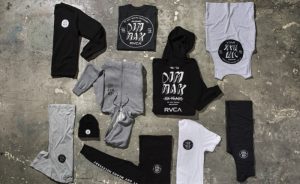 The collection of clothes featured in the Dim Mak x RVCA 20th Anniversary Collaboration doesn’t actually represent the first time the two entities have teamed up for a fashion line, with Aoki already on very friendly terms with RVCA boss Pat Tenore.

“I’ve known Pat Tenore for over 23 years, since I started going to his skate shop when I was 15 years old,” says Aoki. “In 2006, Pat and RVCA gave me my first fashion collaboration—a custom Steve Aoki bag.”

Aoki has become somewhat of a fashion regular in the years since, working with the likes of Adidas and Diesel, though he says, “Nothing feels better than working with a close friend.”

You can check out the Dim Mak x RVCA 20th Anniversary Collaboration over at Dim Mak.

The Rest Is History: Dim Mak

Getting “Ratchet” with Borgore