Nocturnal Wonderland celebrates its 20th birthday this weekend, cementing it as North America’s longest-running dance music festival and a three-day spectacular you simply cannot miss. While most of the festival’s mysteries remain hidden until the show, we do have some gems we can share.

If you haven’t already, download the Nocturnal Wonderland app for iPhone and Android. In there, you’ll find set times, information on food, rides and performers, and lots more. You can also use the custom scheduler to build out your adventure for the weekend and share it with your friends.

Some of you have been with us since the very first Nocturnal Wonderland in 1995, and for others, this will be your very first event. Wherever you fall on the spectrum, be a part of dance music history as we celebrate two decades of dancing in the dark.

Or search “Insomniac: Nocturnal Wonderland” in the Apple and Google Stores! 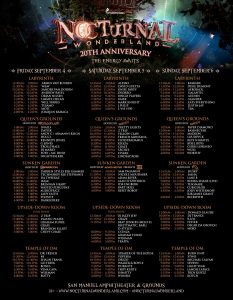