Three days, four nights, five stages and one massive: Welcome to the 20th anniversary of Nocturnal Wonderland! A lot has happened between the first show—held February 11, 1995, at 2708 East Cesaer E. Chavez Avenue—and our upcoming three-day festival at the San Manuel Amphitheater Labor Day weekend. Dance music culture has come a long way over those two decades, and now is the time to celebrate.

In addition to expanding the festival to three days, the 20th anniversary features new camping options. For complete camping details on the options below, head to the Nocturnal Wonderland website. 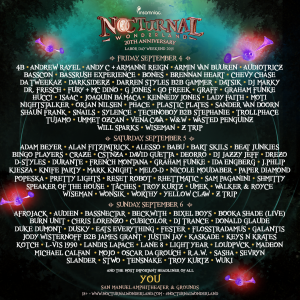