Mainstage prodigy Martin Garrix has enjoyed a particularly active year, firing up his own record label and working on his debut artist album. Over the weekend, though, he managed to squeeze something extra into his schedule in the form of a special benefit show at Exchange LA in support of FCancer, a charity organization providing support to those affected by the disease.

“Having the ability to make and play music for a living is a dream come true,” Garrix posted on his Facebook after the show. “Getting to do it to raise money and awareness for those in need is the greatest honor. Last night I was moved by the support you all showed for a cause I really believe in. Let’s always aim to do good, together.” 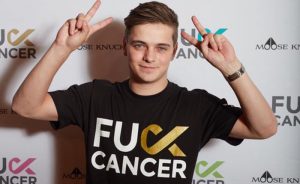 For fans who weren’t able to make it to L.A. for the show over the weekend, Garrix also unveiled a new collaborative T-shirt that can be ordered online, with all proceeds donated to FCancer.

He’s also kindly made more than 20 minutes of the show available online. Check it out above.