It’s been a big week of news for Dutch prodigy Martin Garrix with the reveal that he’s signed with Sony Music International, who will now take care of worldwide distribution for his STMPD RCRDS label. It’s been followed today with the release of his latest vocal anthem.

“In the Name of Love” sees Garrix partnering with Bebe Rexha, who offers her vocals to the song, and it’s an effort that’s set to offer appeal across the radio and summer dancefloors alike. It’ll also be the first release for Garrix under his new major label partnership. 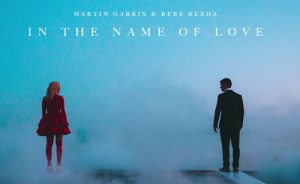 “I’m super excited to be working with such a hungry and passionate team at Sony Music Entertainment,” Garrixx said in a statement earlier this week. “Their forward-thinking approach to streaming and incredible roster of talented artists, combined with their passion and understanding for my vision of the future of my music, made this a no-brainer.”

Martin Garrix and Bebe Rexha’s “In the Name of Love” is available now on iTunes and Spotify, and you can listen below.