Last month, rap princess M.I.A. revealed to the world via a less-than-subtle Instagram post that Skrillex was hard at work in the studio alongside her, joined by another of her past collaborators, Blaqstarr. The curious video snippet she shared also suggested the resulting tune would be a particularly delicious, bass-heavy slammer; and now we have the proof. 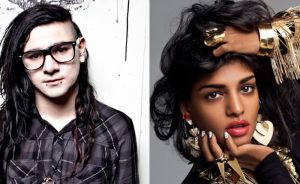 The video for “Go Off”—produced by Skrillex and Blaqstarr—has just landed with an explosive thud. It’s the first complete and official taste of what to expect from her upcoming, heavily discussed, and potentially final artist album A.I.M., scheduled for September 9.

M.I.A.’s “Go Off” is available now on iTunes and Spotify, and you can watch the video above.