After what has seemed like an excruciatingly long wait for fans, EDM rogues Knife Party have confirmed the release date of their overdue Trigger Warning EP, as well as finally unveiling an official and complete version of their “Plur Police” track. Member Rob Swire revealed the completed track for the very first time to Zane Lowe on his Beats 1 radio show; it’s part of the full EP that will be dropping this Friday, November 20. 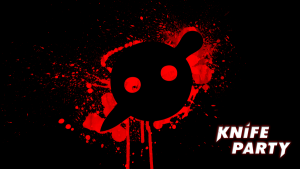 In typical Knife Party style, it packs a massive mainstage punch while simultaneously poking fun at EDM culture in a cheeky fashion. Playing on a riff on the Bob Marley classic “Bad Boys,” the track is intercut with voices informing us that “EDM is fun, bro!” Swire confirmed to Lowe that the track was indeed inspired by the duo’s own escapades on the festival circuit this year.

“We were hearing a lot of music around the time of Ultra in March that was a little cheesy… and with the Knife Party state of mind, we heard all this awful stuff and then decided to make some.”

Lowe himself offered his own take on the “Knife Party state of mind,” reflecting on how they’ve avoided taking things too seriously since launching the project in 2011.

“This is the thing I think that many people have misunderstood along the way about the Knife Party experience, which is that there is definitely a sense of humor… But guess what happens when you come up with a joke that everybody likes: You sell a lot of records.”