Hardwell’s World’s Biggest Guest List stadium event in Mumbai last year saw him hosting over 70,000 fans on his personal guest list as the launch initiative of his United We Are Foundation, through which the powerhouse Dutch DJ/producer is campaigning for underprivileged children who live in communities with poverty and a lack of education. For those who want to get an idea of what went down, he has just released an aftermovie. 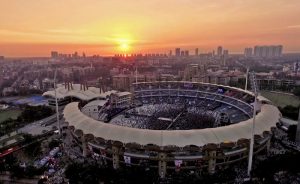 The World’s Biggest Guest List Official Aftermovie features plenty of spectacle, sweeping aerial shots, and testimonies from ecstatic punters. Importantly, though, it also sees Hardwell and his team visiting the slums of Mumbai, meeting with the children whose lives the project will be benefitting. With all profits from the concert having been donated to the Magic Bus charity project, this humanitarian effort was the first of its kind on this scale from a DJ within the electronic music industry.

Visit the United We Are campaign page to make a donation to the cause, and watch the aftermovie above.