Just yesterday, we told you about the particularly awesome “Future of Music” project, which uses 360° video technology that actually allows you to control your view of the action, simply by clicking and waving the mouse around. You might have also seen some of Insomniac’s own 360° videos capturing the art installations and party vibes from our own events (and there are more exciting developments on the horizon).

Dutch titan Hardwell has announced he’ll be joining the hi-tech party, with his Revealed Recordings event at the upcoming Miami Winter Conference using 360° video livestream technology. However, he’ll be stepping it up by incorporating virtual reality into the mix, in what’s billed as the first-ever livestream event available across the entire gamut of different platforms, including VR headsets, iOS and Android devices, Apple TV, and web browsers. 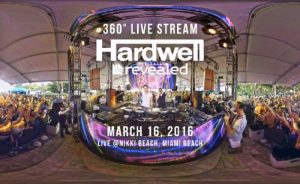 The technology will come courtesy of Amsterdam outfit Littlstar, who will be deploying a army of video cameras to capture the event. Two in particular will be equipped with special fish-eye lenses to allow footage to be stitched together on the spot to deliver a high-definition stream.