It was only a few years ago that the talents of Kentucky-born and Chicago-based DJ/producer Marea Stamper, aka the Black Madonna, were going under the radar, though that’s certainly no longer the case. She’s swiftly risen to commandeer the underground with her versatile mix of house, disco, techno, pop, and whatever else she deems to throw into her celebrated sets. 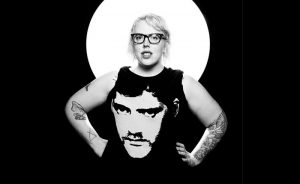 There’s something special about the Black Madonna. Alongside her strong political sensibilities and her outspoken presence on Twitter, she’s playing at pretty much every significant underground club in the world. So much so, she’s been deemed worthy of one of Resident Advisor’s special Between the Beats video series, with a mini documentary charting her recent rise.

“By rising through the ranks as an undiluted version of herself—an outspoken, queer-identifying liberal and feminist with a habit of sweatily rocking out in the booth—she gives the world of dance music a much-needed jolt, and her fans love her for it.”

Watch Between the Beats: The Black Madonna below, courtesy of Resident Advisor.

The Black Madonna: Master of Fun

Resident Advisor Argues We Must “Support, Not Persecute” the Underground in Wake of Oakland Warehouse Fire