Trap duo Flosstradamus have already been gradually taking over the club world with their HDYNATION brand, and they’ve announced they’ll be taking it to the next level with the launch of their new Hi Def Youth label. Its debut release from Party Thieves is set for later this month.

“We’ve been gearing up to launch our label Hi Def Youth and are extremely excited to kick it off with one of our favorite new producers, Party Thieves,” Flosstradamus said in a statement. 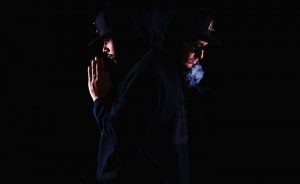 As it happens, Party Thieves are part of Insomniac’s Discovery Project, which was created to give a voice to emerging artists in the electronic music world, and saw them hand-picked to showcase their talent around the country. Flosstradamus were obviously in agreement.

“Like many trap artists, Flosstradamus was one of the first trap acts that inspired me to get into production and pursue a music career,” Party Thieves announced in a statement. “Being able to join HDY Nation as the first artist to release under Hi Def Youth is truly an honor.”

Party Thieves’ UNDRAFTED will be released on Hi Def Youth on May 13. Listen to a preview of “BADD” from the EP above.