These days it’s not only David Guetta and Black Eyed Peas collabs that are infiltrating the radio waves. Dance culture has made all sorts of inroads into commercial radio this year, traveling well beyond the predictable bubblegum EDM-pop we’ve heard ad nauseum over the past few years. It’s been driven largely by Diplo and Skrillex with their wildly successful Jack Ü project, which included their unstoppable crossover collaboration with Justin Bieber, “Where Are Ü Now.” 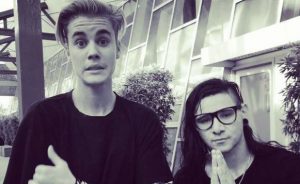 Did you consider yourself a fan? Or is this the sort of collab you want the likes of Skrillex and Diplo to never, ever be involved with again? Well, it matters little, because for the moment it’s looking like these kinds of radio hits will be unavoidable, with Skrillex and Justin Bieber taking the wraps off the video for their new collaboration, “I’ll Show You.” And brace yourselves, dance music fans, because this time it’s a ballad.

It was just this week that Diplo was ruminating on the rising number of crossover hits that have made it onto the radio this year, following the news that his Major Lazer project would have a new album due in 2016 that will include a collab with pop sensation the Weeknd.

“I think right now, that’s the goal for a lot of pop artists, to do a little away from the mainstream… All those records aren’t typical pop production,” Diplo said of his recent radio hits. “I think a lot of people are gravitating toward that, and those records are getting the love.”

What are your thoughts? Do you believe dance music on the radio is a good thing, and are you happy with EDM idols like Skrillex and Diplo collaborating with pop stars? Or does it represent the end of days for dance music? Be sure to let us know in the comments below.

Skrillex Talks His Bieber Collabs: “To the Outside World, It Doesn’t Seem Obvious”