It happens with every festival. You’ve got your tickets, you’re already rallying your crew and arranging travel, but there’s still one thing that’s driving you nuts: When are they going to release the @#&* lineup?!

We know. Yes, we know. And that’s why we’ve pulled some strings this week to be able to reveal to you now—drumroll, please!—the first wave of acts for EDC UK 2016: 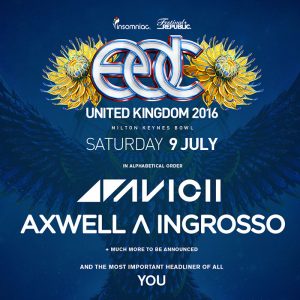 That’s right, Swedish hit-machine Avicii will make his highly anticipated return to EDC UK since he played the festival in 2014. It will be his first show since the release of his sophomore album Stories, which hit #1 on Billboard’s Dance and Electronic Albums chart last month. July will mark the first appearance of Axwell ^ Ingrosso at EDC UK and an exciting journey back to the country after their sold-out show at Alexandra Palace earlier this year.

EDC UK 2016 takes place Saturday, July 9, at Milton Keynes Bowl. Many more names will be announced in the coming weeks, so stay tuned to this space, as well as the EDC UK website.